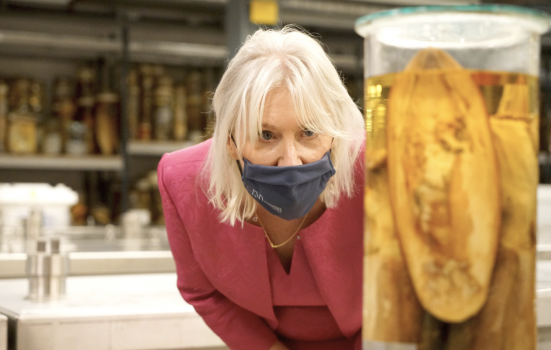 At last, we have a Secretary of State for Culture who really knows her business. Not only is she a well-selling novelist – a ‘creative’ – she will understand her responsibilities for the British media landscape through her appearance on I’m a Celebrity, Get me out of Here. With her celebrity status and forthright views on the BBC, who better to lead a post-Covid renaissance?

The significance of Nadine Dorries’s promotion to lead the Ministry for Digital, Culture, Media and Sport lies not in her comments on “left-wing snowflakes”, but that she is the tenth Culture Secretary in ten years. It shows the value Conservative Prime Ministers have placed on a small ministry with a wide brief, and little political clout.

The chair of the parliamentary committee supervising the DCMS has called it “almost an afterthought”; the chair of the Public Accounts Committee has commented of the DCMS that the Covid crisis has “exposed just how poorly departments across Government understand the sectors they oversee”.

‘Theatre is nice to have but not essential’

The DCMS might point to the £2 billion Culture Recovery Fund as evidence of its success, but the Public Accounts Committee found plenty to criticise. The Culture Recovery Fund has been slow in delivery, concentrated on ‘the crown jewels’, done little for the mainly freelance workforce, and in any case the fund was £1 billion too small. The DCMS does not appear to understand how the theatre works, producing a Covid Live Events Insurance scheme that producer Cameron Mackintosh and colleagues pronounce unworkable.

The Department has failed to sort out post-Brexit touring in Europe for theatre companies and orchestras. The culture lead for the Local Government Association, Portsmouth City Council leader Gerald Vernon-Jackson, has complained that the Department did not appear to have explained to their Secretary of State the importance of the £2.2 billion contribution made by local authorities to DCMS priorities.

He was referring to Oliver Dowden, who has moved on to higher things. But Dowden – who once explained to composer Andrew Lloyd Webber - “unfortunately, the Government thinks that theatre is nice to have, but not essential” - has set a precedent for a much more interventionist approach to culture.

His instruction to museums to “retain and explain” controversial objects, the imposition of a requirement for new and reappointed museum trustees to “individually and explicitly express their support” for this policy, and his interference in trustee appointments has led to resignations.

Dowden has riled the fashion industry and commented on Test Cricket selection. The most egregious intervention is the decision to rerun the selection of a chair for Ofcom – culturally a key post – because the Government’s preferred candidate, right-wing newspaperman Paul Dacre, did not get the job first time.

The Department similarly is being more assertive, telling government buildings to fly the Union Jack every day, and now referring to discussions with non-departmental bodies as “accountability meetings”. The Arts Council appears to have been reduced to an out-sourced agency.

Common Sense and the ‘Boris Whisperer’

Nadine Dorries is probably comfortable with all that, but will face further pressures, from inside and outside Government. There is the Common Sense Group of some 80 MPs, announced by former minister Sir John Hayes in July 2020. “We need to stop misplacing common sense on immigration for bigotry”, was his headline.

Since then, the Group’s concerns have developed into general attacks on ‘the chatterati’. It declared last November: “part of our mission is to ensure that institutional custodians of history and heritage, tasked with safeguarding and celebrating British values, are not coloured by cultural Marxist dogma”.

More sinister, because it is generally invisible and not subject to scrutiny, is the influence of the cultural power-couple Douglas ‘Dougie’ Smith and his wife Munira Mirza. Smith has a strong influence over appointments to quangos and non-departmental bodies; the DCMS has oversight over a great many in the cultural and media field. Mirza is head of the No 10 Policy Unit.

It is an unexpected alliance between a former associate of the Revolutionary Communist Party (Mirza) and a member of the disbanded Federation of Conservative Students (Smith), but evidently a powerful one. Referred to by one Cabinet Minister as a “Boris whisperer”, Mirza has worked with the Prime Minister since 2007, and became Johnson’s deputy mayor for culture.

The authority of experts

Mirza’s most notorious cultural intervention was in the formation of, and subsequent report by, the Commission on Race and Ethnic Disparities, much maligned by what the Common Sense Group would call ‘the liberal elite’ for its denial of the existence of institutional racism. Mirza, Oldham-born into a working-class Asian family, might be thought to look favourably on attempts to address this issue.

But it may be that her individual success in getting into Oxford, and then earning a doctorate at Kent University has made her less sensitive to the ill-fortune of those less brilliant than herself. Readers of her book The Politics of Culture: The Case for Universalism will find a critique of multiculturalism, while the alternative “universalism” that she promotes requires experts who can define culture and assert its value. She calls for “the authority of experts”, presumably including herself. And Nadine Dorries.

Death of the ‘arm’s length principle’?

The irony for members of the chatterati such as myself is that for years we have been asking for a more assertive and competent DCMS. Now we have the assertiveness (if not the competence), it turns out to be a challenge to the former comfortable consensus.

One of the vehicles of that consensus was the ‘arm’s-length principle’, which placed a distance between the politicians, the cultural organisations, and the creatives they employed. It was often a policy fiction, but it protected the politicians as much as the artists. It was a convention followed by both Labour and Conservative Governments and, significantly, two former culture ministers have felt provoked by what is happening to protest.

Ed Vaizey, Conservative Minister for Culture 2010-16, has said: “It is one thing to have a bit of fun to feed the tabloids, quite another to start issuing directions to arm’s-length bodies. It is a serious breach of the arm’s-length principle, an attack on their independence and scholarship, and hugely damaging to morale at a time when the sector is already on its knees.”

Chris Smith, Labour Secretary of State for Culture, 1997-2001, writes in this month’s Art Quarterly: “I fear we are entering a topsy-turvy world in which this fundamental [arm’s-length] principle and approach are being turned on their heads.” He concludes “it is time for us all to give a clarion call to say that the Government must get out of the way”.

Robert Hewison is a cultural critic and author of Cultural Capital: The Rise and Fall of Creative Britain published by Verso in 2014.

I think it was the highly experienced Arts Manager Sir John Tusa who, some years ago, remarked that whilst the Arms Length principle still existed, the length of the arm had, over time, become considerably shorter.
It was Raymond Williams who, in a celebrated 1979 Political Quarterly essay about his experience on the Arts Council, first christened it 'the wrist's length principle'. During the Thatcher/Rees Mogg Era direct interference was less obvious - you simply appointed known Tory replacements as seats could be vacated and packed the Council with trusties. Job done! Followed by a bonanza for 'management consultants' who sent in teenagers to instruct professional arts people in how they should be doing their jobs... Williams' article on the fragility and hypocrisy of the system is still highly relevant over 40 years on.