Culture Secretary's comments on class resonate with the sector

Nadine Dorries courted controversy by saying you have to come from privilege to make it in the arts. Is she right? 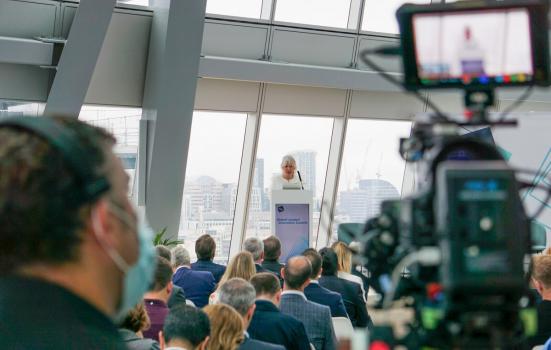 Newly-minted Culture Secretary Nadine Dorries has echoed concerns that careers in the arts are the preserve of the privileged.

Speaking at a Conservative Party conference this week, Dorries said "posh" actors had an advantage over those from the working classes.

"If you want to do well as an actress - yes, I still say actress - then your name needs to be Daisy Edgar-Jones and your dad has to be head of entertainment at Sky.

“No matter whose name you think of today that has made it in theatre, TV and the arts, they come from a pretty privileged background.”

"I think she's right - and I think it's interesting that we have a Secretary of State who is flagging this issue," New Writing North Chief Executive Claire Malcolm said.

"Because of the attention and emphasis and thinking that my organisation puts into representation I would like to think it would be different.

"What really upsets me is I don't want to believe it's harder now [for working class people] but I think it is."

"Our industry is big enough to foster talent whether it comes from Harrow School or Hartlepool. A different approach to funding in broadcast and live performance can do that."

"It won't go back to how it was - everyone gets a grant if you pass an audition - but if that's what Nadine Dorries really wants, is to get working class people in the door, there's a lot she can do."

While it's not impossible to break into the arts from the working classes, research suggests it is up to five-and-a-half times harder.

More recent analysis found the creative sector would need to employ another 263,200 working class people to be as diverse as the rest of the UK economy.

The gap is greatest in music and the performing and visual arts, where just 22% of employees come from a working class background compared to 60% who are privileged.

Covid-19 threatens to make the gap wider still: "Those with access to financial reserves and networks will have been better placed to withstand the heightened insecurity, risk and competition for roles created by the pandemic," the PEC says.

"We still work with a lot of kids like Nadine," Malcolm says.

"Those issues are still there... I would like to see more focus on that generation as a priority."

John said there is a "leaky pipeline" of working class talent that are flushed out by financial barriers to education, auditioning and work in low paying industries.

"The Tories cut music and drama teachers - if Nadine wants to help, she can start there."

PEC has its own ideas. Alongisde a long-term financial settlement for cultural education, it recommends a business-led social mobility taskforce for the sector and a 'Good Work' strategy to eradicate unpaid internships.

Dorries says she wants to use her new role to challenge organisations "to do more in places where the inspiration and aspiration has gone".

"I don't think we ever had it," Banner Theatre Artistic Director Dave Rogers said.

"I think a massive part of identity politics was that you could talk about gender or race but not class, and then it became more and more prescriptive where you had to tick this box or that box.

"Whenever you do a grant application to the Arts Council, you don't talk about class, you talk about 'deprived communities.'"

John agreed: "We have had a lot of pushback saying 'don't talk about class; it's not relevant' but we want to talk about it."

"Class isn't a protected characteristic under the Equality Act (2010) and that's the beginning of it. It kind of fell off the agenda then."

Malcolm said New Writing North's 2018 project, Common People, was part of "a wave of activity" around class in writing in that time.

"I think we got class a bit more on the diversity agenda - more than it had been before."

She said it would be "terrible" to claim the sector lacked the inspiration or aspiration to fix its class divide.

But she was surprised what a difference having a celebrity ambassador - actor Michael Sheen - made to its latest initiative, A Writing Chance. It received 750 applications for 11 mentorships covering writing for stage, screen, print and digital publications.

"The irony hasn't been lost on me," Malcolm says.