The City of Culture must take audiences' comfort into account, its Creative Director says, as the upcoming change to restrictions opens the door to larger in-person events. 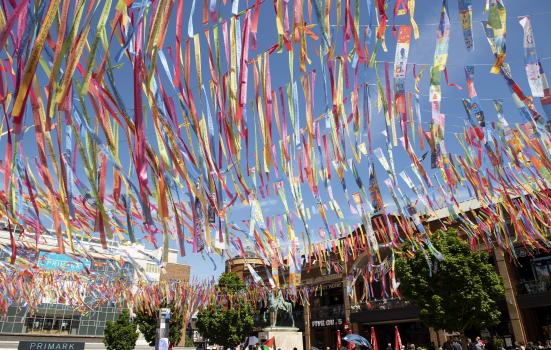 Audience sentiment around Covid-19 will guide the festival's approach to relaxing restrictions
Photo:

Coventy 2021, the UK's City of Culture, is considering maintaining social distancing in response to "audience sentiment".

While no firm decisions will be taken until government guidance is published next week, the festival is "weighing up various options for stage 4" when restrictions are removed, a spokesperson said.

Creative Director Chenine Bhathena told the DCMS Select Committee this week that people in the region are still worried about contracting Covid-19 even if they are vaccinated.

"There [are] a number of events where we were planning a very low capacity audience, particularly indoor events. We now have to really look... at how we increase those capacities but also what our approach will be to social distancing.

"Clearly there is still a lot of concern among communities. People are still very cautious and we need to be able to show them we're taking the Covid situation seriously as well as joining with Government in moving forwards."

Steven Brine MP asked "on what authority" Coventry was "diverging" from the Government's 'freedom day' approach.

Bhathena responded: "We're not diverging from what the Government is saying; we haven't seen the official guidance yet."

"That might change as we go into July and August but we need to be aware of that."

The constantly changing restrictions have forced Coventry 2021 to think outside the box, Bhathena added. Eight different versions of its signature event, Coventry Moves, had been considered before its launch in June.

"We lead but we do it it carefully," she said.

Bhathena also called for more certainty around funding for future City of Culture years now the event has become a permanent fixture.

"I would really recommend in future that the winning city is just guaranteed some funding... it would save everyone time and energy if an agreement can be made.

"You could just assume that every four years it will be bigger and better but actually, that's going to be very hard to maintain, especially coming out of the pandemic."

For a long time, Coventry 2021 was confident it would receive funding but didn't know where from, Bhathena said. DCMS contributed £7m of the £42m budget, but its team was underresourced to provide more involved support.

"It does mean that when you have the mega-events like the Commonwealth Games or Festival 2022 or even the Queen's Jubilee that they become more of a priority."

"It becomes a very complicated patchwork of funders wanting to fund things to meet their own trustees' funding objectives and priorities."

She said DCMS might corral interested funders "so they can almost protect cities from some of that".

"Creating a cohesive environment for events - that's where DCMS can create massive value."

Bhathena, Hollis and University of Hull Professor Franco Bianchini also responded to MPs questions about the potential for major cultural events to divide rather than unite communities.

Bianchini said this social impact was hard to quantify: "One of the problems in the past has been the creation of some divisions inside the cultural sector from the previous cities of culture."

He said cities can sometimes achieve "real results" approaching divisive subjects, sharing the example of Linz, one of the European Capitals of Culture in 2009.

The Austrian city's decision to host an exhibition about Hitler caused a backlash.

"There was very significant debate in the city, in the media and schools and universities. There was a skeleton in the cupboard that was talked about and I think most people now think it was important for the city's growth."

Hollis said: "We need to be careful about creating a singular narrative around the legacy of events."

As cultural mega-events wind down, volunteering networks will be crucial in ensuring the legacy of their intangible effects like civic pride, she added.