'No guarantee' of funding for UK City of Culture 2025 winner

The contest will continue into 2029 and beyond, with £40,000 grants to develop longlisted applications regardless of whether they win or lose. 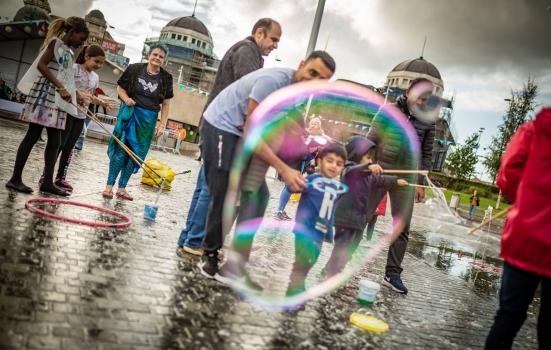 UK City of Culture will become a permanent, "regular event in the country's cultural calendar" and a catalyst for 'levelling up' areas outside of London, it has been announced.

Groups of towns are now eligible to bid for the 2025 title, which opened for applications last weekend. The showcase is expected to supercharge economic growth and cultural participation in the winning place, continuing a pattern of success attributed to the competition.

Six longlisted applicants will recieve £40,000 to develop a "scalable" proposal for their area "to a certain extent" regardless of whether they win or lose.

However, DCMS cannot guarantee prize money for the winning bid: "Rather, we expect the successful place will need to bid into existing pots [of funding]."

Guidance for applicants notes "a phased approach" dependent on a successful fundraising campaign may be necessary.

"We would expect you to align your own local resources and budgets to deliver your programme, and you will need to consider how to make best use of other potential sources of funding."

While the department says this is normal, post-Covid budget pressures on many local authorities may make a winning bid - or even an attempted one - unviable.

Bidding alone can be a costly process, with years of preparation and specialist consultants often procured.

"We realise that there are costs associated with developing and submitting a bid and that Covid-19 has put significant pressure on local resources," guidance from DCMS says, promising a "lighter touch" process.

"We want as many places across the UK as possible to feel able to bid and to benefit from the bidding process. The process itself is a valuable exercise in defining a place’s ambitions, developing ideas and partnerships and setting out an integrated cultural strategy."

Culture ministers in the devolved administrations have encouraged their towns and cities to bid while Phil Redmond, UK City of Culture Chair, reinforced the contest's ability to "reset both internal and external perceptions" of a city's culture.

"It is the excuse for people to talk to each other, rather than at each other."

Four contenders - Bradford, Medway, Lancashire and Southampton - have reaffirmed their intention to bid as applications open.

The cities have thrown their hat in the ring at considerable expense, hiring bid directors, launching websites and marketing campaigns, and developing the long-term plans required to convince the selection panel their proposals are sustainable.

However, several places that expressed interest pre-pandemic have already withdrawn or are yet to confirm their bids, including Chelmsford and the Tees Valley.

Bradford is promoting exports like magician Dynamo and and its "young, diverse, entrepreneurial" district as a breeding ground for culture-led regeneration primed for the 2025 title.

"That city for me is the best of who we are as a country and that is not said enough. It represents the potential of what our country is and can be," renowned former local producer Madani Younis commented.

Bradford has launched a new strategy for a 10-year "cultural renaissance": "Our bid will form a major part of the council’s future planning," Leader Susan Hinchcliffe said.

Medway Council Leader Alan Jarrett said the city, which has also recently released a long-term culture strategy, aims to become the first south eastern area to win the title and "write a new and exciting chapter in Medway's history".

"In particular, it would give our young people the opportunity to shape what we do, create a legacy of opportunities for all our residents, bring significant benefits to Medway and the wider Kent area and showcase all we have to offer."

Southampton hosted a launch event for its bid on Sunday (May 27) where City Council Leader Dan Fitzhenry expounded the value of the city's existing cultural assets, while Lancashire has called for local artists to help shape its "virtual city" bid.

"We are offering up the county as a site for experiment at large scale between real and imagined," Bid Director Debbi Lander said.

The bidding cities must demonstrate how they will drive growth through investment in culture and creativity.

Like Festival UK 2022, the 2025 City of Culture panel seeks projects that will develop cross sector partnerships, including collaborations with STEM sectors.

While there is no minimum population requirement for an aspiring city or group of towns, guidance states there needs to be "critical mass" for the City of Culture programme to succeed there.

"We expect programmes to be able to appeal to a wide range of audiences and to increase participation in cultural activities as well as contributing to economic growth, regeneration, community cohesion, health and wellbeing."

Local communities must be involved in shaping the bid and eventual programme, which in turn must put forward "realistic and credible plans" for funding and managing legacy work.

Ben Cooper, a researcher for The Fabian Society, said it was "great to see DCMS reforming [the] 2025 City of Culture criteria to focus more on participation" - something he called for in a report on the state of arts funding published last year.

Its three recommendations relating to the competition were that the Government should provide direct funding to enable bids, amend the application guidance to focus on growing community arts organisations, and give smaller "impact awards" to cultural projects across the UK alongside the main City of Culture title.

A longlist for the 2025 year will be announced in September, with the winning city or town to be chosen by May 2022.