Anti-oil campaigners are calling for the Museum’s sponsorship deal with BP to be reviewed following revelations that trustees weren’t involved in the decision to renew the relationship. 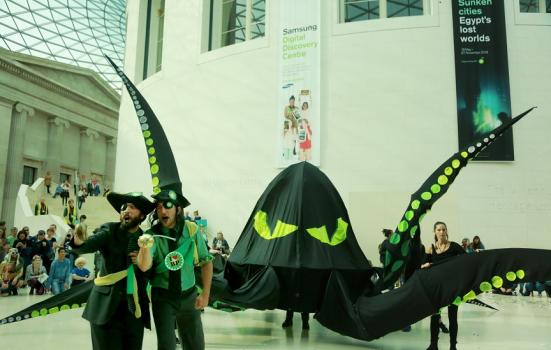 ANO is describing the deal as “illegitimate” and calling for the decision to be revisited, “incorporating a thorough and independent investigation into BP’s activities, including meaningful consultation with staff, museum-goers, experts and trustees”.

A Freedom of Information request by ANO, which has mobilised against cultural sponsorship by oil companies since 2004, has revealed that the Museum’s trustees were not involved in the decision to renew the sponsorship. The decision was delegated to new Director Hartwig Fischer and the Board of Trustees “was informed prior to the announcement of the renewal”.

The group has also reported that the British Museum withdrew its ethics policy in 2012 and replaced it with a Standards of Conduct policy. The museum claims sponsorship is covered by this and a raft of other policies, but according to ANO, “none of these policies address relationships with sponsors” and no committee has specific responsibility for considering ethical issues.

ANO said: “Putting in place a dedicated ethics policy and ethics committee should be the minimum standard for a leading museum of international standing.”

The MA’s Code requires its members to “seek support from organisations whose ethical values are consistent with those of the museum” and “exercise due diligence in understanding the ethical standards of commercial partners”. The group is asserting that leaving trustees out of the decision amounts to a failure to conduct an “accountable assessment of the claims made against BP and its suitability as a sponsor”.

It is the second time this year that ANO has referred the British Museum to the MA. Earlier this year the group accused the Museum of allowing BP to have curatorial influence over its activities, but the MA’s ethics committee concluded that its Code of Ethics was not breached.

The British Museum rejects the latest allegations. A spokesperson told AP: “The Museum has very clear governance procedures and an internal regulatory process in place for the proper consideration of philanthropic support or corporate sponsorship offered to the Museum. The Board of Trustees are highly respected and are there to safeguard the collection and the reputation of the Museum.

“We respect that people have strong views on this issue but it is part of the Museum’s role to develop programming (including exhibitions) which highlights all world cultures for the widest public benefit. We can only do this with external support.”

A revised version of its governance principles was published last month.

The Museum recently published its latest Annual Review, revealing that 2015/16 was its most successful year ever. Nearly 6.9 million people visited its London site, while 40 million accessed its digital content and 7.7 million saw British Museum objects outside London. But the organisation’s staff appear to be at odds with its policy on oil sponsorship.

Clara Paillard, President of the PCS Union Culture Sector which represents British Museum staff, said: “Last year, we wrote to Neil MacGregor with the PCS Culture Sector’s concerns about BP sponsorship at the British Museum. He assured us that any ethical questions arising around sponsorship are discussed and decided by the Board of Trustees, and that they take this very seriously.

“We are now finding out that the Trustees were merely ‘informed’ rather than taking the decision. This is very disappointing. When we carried out a survey of staff at the museum in March this year, 62% thought oil sponsorship was not ethical. It is time for Big Oil to become persona non grata in our museums, just as tobacco companies are.”