Library and museum staff planning 14 days of industrial action hope it will be "a wake-up call for the council to come to the table for constructive negotiations". 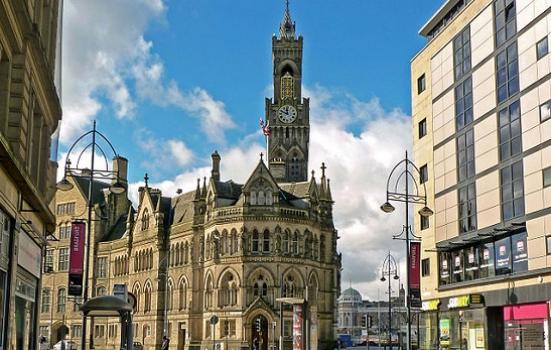 Bradford's bid to become UK City of Culture 2025 could be jeopardised by ongoing strikes. Pictured is Bradford Town Hall.
Photo:

Library and museum staff in Bradford are to take industrial action in protest at planned cuts to their services, following recent strikes by other museum workers.

Members of the Unite union voted for a total of 14 days action from October to December – a move described by Unite regional officer Mark Martin as “a very strong shot across the council’s bows” and “a wake-up call for the council to come to the table for constructive negotiations”. The action will begin with a two-day strike on 21 and 22 October.

Martin said: “The number of strike days demonstrates how passionately our members feel about the swingeing cuts that the council is hell-bent on forcing through which could see funding for this service axed by 65 per cent.

“Libraries and museums remain an integral part of the city’s social, cultural and educational fabric – and we continue to believe that they are worth fighting for.”

'Better to work with us'

In a statement, Bradford Council said that around 50 Unite members – about 39% of the overall libraries and museums workforce, according to the council – had voted to take strike action.

A spokesperson said: “The Council has finished consultation for the 2019/20 changes to the libraries and museums services and they were implemented on 1 September. No libraries were closed during this process.”

They added that Unite representatives had “turned down a number of invites to present their concerns regarding our consultation process to date”.

The spokesperson continued: “We believe that Unite would be better served working with us, offering their views on what can be done to achieve the savings required of the library service in the face of prolonged government cuts, and helping to shape the future of our library service, rather than taking this action which will primarily impact library service users and be of no benefit to staff or residents.”

Earlier this year, the Labour-controlled council announced budget savings of £16.1 million for 2019/20 and identified a further £17.4 million for 2020/21. Up to and including 2019/20, the city council says it has made savings of £262 million since 2011 in response to funding cuts from central government.

Bradford last month launched its bid to be UK City of Culture 2025, committing £1.4 million to promote the bid over the next three years.

However, the bid could be troubled by ongoing industrial action: Bradford's Science and Media Museum was one of seven Science Museum Group venues where workers went on strike in August. As the city tries to muster support for its bid, a lack of buy-in from disgruntled cultural workers could be problematic.

The district has historically had some of England's lowest engagement rates for the arts, and the city has been working to create new structures to "strengthen its capacity and to establish a new cultural voice for artists and independent cultural groups", according to materials released by the council. The bid will form part of Bradford Council's new 10-year cultural strategy, due to be announced later this year.

Councillor Susan Hinchcliffe said that if the bid is successful, "it would benefit every corner of the district".