The Creative Practitioners Fund will be used to support research and development, and will be open to people working in the wider creative industries across England. 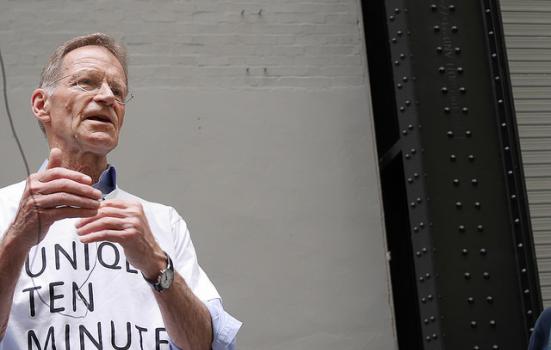 In a speech at a Creative Industries Federation event on the necessity of international exchange this week, ACE Chair Nicholas Serota said a country’s economic success “draws on the skills of the individual” and concluded the national funder “should do more” to support individual practitioners.

“It seems appropriate to announce that we will shortly be launching a new fund that will support individual talent to encourage artists and producers to experience the value of working abroad,” he told the audience at the Guildhall School.

“The Creative Practitioners Fund will invest in the work of individuals; it will, importantly, also offer support for research and development.”

He added the fund would be “significant” and open to practitioners “in the wider creative industries – an acknowledgement of how talent flows between us”.

Further details about the fund will be released in coming months.

Serota’s speech also focused on the influence of immigration and overseas collaborations on British culture, tracing the creative growth of numerous organisations to a “two-way flow of talent”.

The ACE Chair stressed the importance of expanding such global exchange, warning that the opposite would be detrimental. He said: “Cultures that cut themselves off may become exquisite, like a rare breed of animal; but ultimately they stagnate and are irrelevant to a changing world.”

Serota also emphasised the importance of freedom of movement, saying the present arrangements are “far from perfect” and the “right conditions for artists” should be secured irrespective of the negotiation to leave the EU.

His comments echo those made by industry bodies the Incorporated Society of Musicians and a-n, which this week launched a campaign calling for free movement for anyone working in the creative industries to be maintained.

Serota continued: “The negotiation creates an opportunity for government to think how the flow of talent can be as smooth as possible.

“How we can retain the conditions that currently work well; and extend these to artists and creatives globally, including those coming for short working visits.

“This is vital if we are to retain the edge we have in highly competitive world markets.”

Wednesday, 23 September 2020
Long-held plans for Smithsonian Institution and the V&A to jointly curate a gallery in the V&A East museum when it opens in 2023 have been abandoned in favour of a collaboration that will... read more
(artnet)

Wednesday, 23 September 2020
Objections to inadequate social distancing measures at Madrid’s Teatro Real led to a production of  Verdi’s A Masked Ball being called off when the audience started slow hand clapping and calling for... read more
(Classic Fm)