Theatres are opening their doors to more child-friendly performances suitable for children with autism, following a successful national pilot project and the development of a model for best practice. 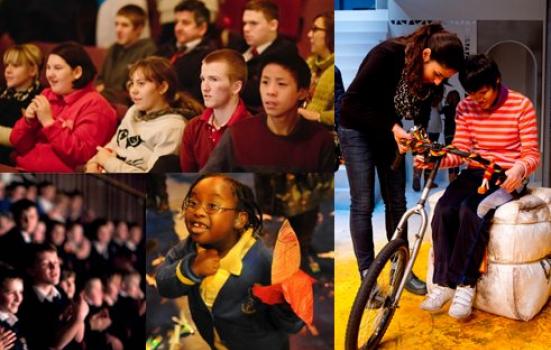 A shared ambition for access and inclusion across UK theatres has prompted the creation of the model of best practice for Relaxed Performances aimed at children with autism and their families. Theatres and partner organisations sharing their experiences at the Autism & Theatre Inspiration Day 2013 have developed a list of tips for developing successful Relaxed Theatre projects.

The move to identify best practice has stemmed from the national Relaxed Performance Pilot Project 2012/13, which was set up in recognition of the fact that many families with autistic children, children with sensory and communication needs or a learning disability are reluctant to attend public theatre performances. The project, created through a partnership of the Society of London Theatre, the Theatrical Management Association, The Prince's Foundation for Children & the Arts, the Ambassador Theatre Group and The Nancy Lurie Marks Family Foundation, built on the work of theatres including Polka Theatre in London and the West Yorkshire Playhouse in Leeds, that have been providing Relaxed Performances for years. It presented a range of family friendly musicals, drama, comedy and pantomime to appeal to all ages, and involved giving autism-specific training to 300 theatre staff, including the cast, box office, bar and ushers, and advice to marketing and box office teams on how to find and engage with potential audiences. The eight theatres that participated in the pilot were advised on adjusting light and sound levels during the performance to suit the needs of the audience and designated chill-out areas were created for audience members to use should being in the auditorium become overwhelming. Collaborating with local charities and community groups was found to be essential in creating and implementing the Relaxed Performances, and the new guidelines point out that these should not be the responsibility of one department, but the responsibility of everyone.

An evaluation of the project  reveals that although 90% of attenders had never been to a Relaxed Performance before, over 80% would attend another. Parents suggested that the promotion of Relaxed Performance brought about a shift in public awareness and a greater understanding of autism through engagement with their local networks. Based on the success of the Relaxed Performance Project all the theatres involved have programmed further Relaxed Performances in the next 12 months. Jeremy Newton, CEO of The Prince's Foundation for Children and the Arts, welcomed the project as marking the beginning of improvements in access to make cultural venues much more welcoming and inclusive for children and families: “This is all about inclusion, tolerance and understanding.” Mark Lever, Chief Executive of the National Autistic Society, said: “Training staff and making adjustments to a production can make a huge difference, and the hard work of theatres across the UK has already opened the door for many families up and down the country… It's vital that organisations continue to work together and share practical suggestions”.