Refund scandal could tarnish the reputation of the theatre industry

Ticket buyers fighting to claim refunds from ATG Tickets have found the company is not automatically refunding transaction fees, claiming this is in line with the industry’s Code of Practice. 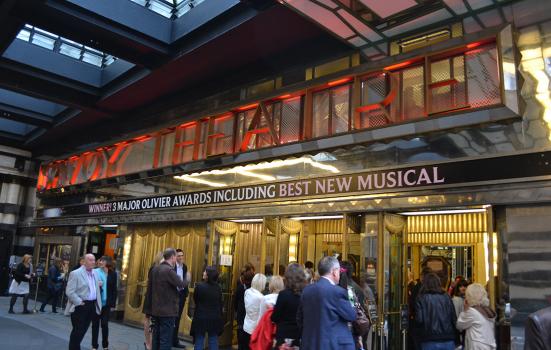 ATG’s Savoy Theatre: ‘Sunday in the Park with George’ has been cancelled but ticket buyers have had to fight for their refunds
Photo:

Accusations of misrepresentation, miscommunication and misbehaviour have been levelled at the ticketing arm of UK theatre giant Ambassadors Theatre Group (ATG), which is failing to respond to refund requests from bookers of cancelled shows and is withholding transaction fees from refunds it has processed.

It claims this is in line with the Code of Practice of the Society of Ticket Agents and Retailers (STAR), though STAR is offering reassurances to customers that don’t match the small print in its own code.

ATG’s automatic response to show cancellations has been to offer customers credit vouchers. For a booker to obtain a refund for tickets they must call the ATG Tickets box office. Scott English wrote on Twitter: “Not impressed by @ATGTickets being automatically issued with a credit voucher, even after I requested to be refunded when I replied to their email.”

Despite being told they will receive a refund in 7 to 14 days, many bookers have waited over a month for the refund to be processed and Twitter has been alive with complaints and growing anger about the extensive delays, to which ATG Tickets offers a standard reply ‘…please DM us your order number and we’ll check on this for you’ – even to people like Amie Walsh, who gave her order number in her tweet to them.

Matt Partridge wrote: “I’ve sent the refund form via your link at least 5 times for a show cancelled in March but have had no communication from you. I cannot make use of the voucher. How do I go about actually getting a response please?”

And ‘Stratford upon Alan’ accuses the company of failing to adhere to government guidance on refunds, and “being deliberately dishonest about your procedures”, saying “I will be escalating to the relevant authorities if required”.

Among those caught up in the ATG refund process is media and learning specialist Carl Woodward, who has documented his efforts to obtain a full refund from ATG in his blog, in which he said: “For hard-up customers trying to get their hard-earned money back from ATG is the equivalent of wrestling a pig”. He told AP: “ATG is guilty of misrepresenting their legal obligation to refund customers; miscommunicating about the actions they are taking; and generally misbehaving in their relationships with customers, who they describe as ‘valued ticket holders’ but treat with contempt.”

He pointed out that, even those who accept the credit vouchers are not guaranteed they will get the seats they want if the performance they had booked is rescheduled, as priority booking has been abandoned.

Woodward’s efforts to obtain his refund were met with a series of different responses that he interprets as ‘buying time’, and he is concerned that “Credit vouchers will be worthless in the event that ATG collapses – this affects your legal rights, comrades”. He suggests that customers state explicitly that they want their money back in full and ask when they can expect the cash to be returned.

More controversial still is ATG’s policy of withholding transaction fees from refunds that are made. Woodward finally managed to persuade ATG to refund his £3.95 transaction fee.

But Peter Scandrett has not been so lucky. He has challenged ATG on Twitter on this point, saying: “Peeved that @ATGTickets have finally refunded my tickets (£120) for a March show BUT kept the £3.65 booking fee. Particularly misleading as they initially offered a “full credit voucher” for the £123.65 but instead when changing that to a refund they stayed silent on that cut.”

An ATG spokesperson confirmed to AP that it is withholding transaction fees, and pointed to section 7.6 of its terms and conditions, which tells customers “The refund for Ticket(s) equals the price paid by You to Us for such Ticket, including the applicable per Ticket booking fee but excluding the per transaction collection or delivery fee”. The spokesperson confirmed, however, that “the vast majority of our shows no longer have booking fees”.

ATG claims this approach to refunds “is in accordance with STAR codes of practice”.

But AP has discovered that STAR, the self-regulatory body for the ticketing industry, is sending mixed messages to the public about their rights.

In the ‘Buy with Confidence’ pledge it makes to the public on its website homepage, it says its members, which include ATG, will “Refund at least the face value of the ticket if an event is cancelled and the event organiser enables and authorises refunds”. It clarifies the meaning of ‘Face Value’ as “the price printed on a ticket”, and goes on to explain that “Some people continue to refer, wrongly, to the face value as being the price originally set for the ticket by the event organiser or venue before the addition of any booking fees, service charges or other extra costs. However, for clarity, we refer to that as being the ‘event price’.” 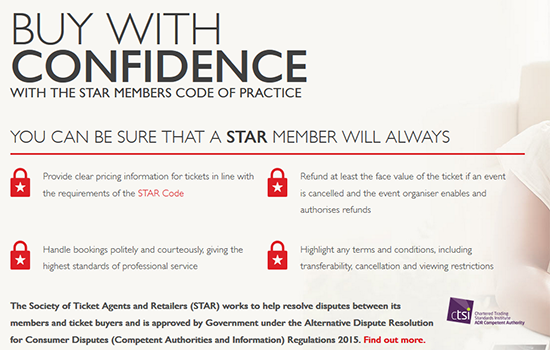 But a STAR spokesperson has contradicted its own promise, telling AP: “The STAR Code of Practice requires that members refund at least the event price, often referred to as the face value price, where a refund is due”. They commented “members should make their policy on refunds clear in their terms and conditions of sale so that customers are aware that they may not receive a refund of booking fees or transaction fees”.

This contradictory message is also published in the FAQs on its website, which say “The STAR Code of Practice requires that you are refunded at least the event price of the ticket you purchased if an event is cancelled. Some ticket sellers will also refund any per ticket booking fees you were charged but others will not.”

These discrepancies draw into question the extent to which ticketing in the theatre industry – described by Woodward as being ‘like the Wild West’ - is being effectively monitored on behalf of customers by a self-regulatory system that is paid-for by its theatre members.

Misrepresentation of consumers’ rights was supposed to have been ripped out of the ticketing industry following the publication of a 2016 government-sponsored independent report into the consumer protection measures concerning online ticketing.

The report was commissioned following a 2013 complaint against ATG and others, upheld by the Advertising Standards Authority, for misleading price claims, and the ASA subsequently issued advice on ticket pricing practices in 2015.

Its recommendations included a challenge to secondary ticketing platforms to ensure sellers observe the rules set out in the Consumer Rights Act 2015 – which includes providing information such as the face value of the ticket. The report’s author, Professor Michael Waterson, also called for more transparency, including “the simplification, clarification and standardisation of pricing and refund information”.

He recommended that the ticketing industry should “come together to standardise the way in which information on available ticket outlets and the pricing structure is made available to the public”, and concluded “more should be done to inform consumers seeking tickets about how the market operates across both primary and secondary sellers.”

Now, during the Covid-19 crisis, cancellations and refunds are under special scrutiny from The Competition and Markets Authority (CMA), which is investigating reports of businesses failing to respect cancellation rights. 4 out of 5 complaints currently being received by its COVID-19 Taskforce relate to cancellations and refunds, and consumers are being encouraged to report unfair practices. Although the theatre industry isn’t currently among the top three industries of concern, the CMA is taking action based on information it receives, and says “If we find evidence that businesses are failing to comply with consumer protection law then we will take tough enforcement action to protect those rights."

Of equal concern as the impact of ATG’s refund policy on customers is the wider impact it could have on the reputation of theatres in general.

Rebecca Gould tweeted “@ATGTickets Concerned that you continue to ignore emails about refunds (months have passed). Theatre relies on a contract of trust with its audiences and I’m afraid you’re letting down the whole sector. You need to reply.”

Other theatres – both subsidised and commercial – are offering refunds at the same time as encouraging their customer to donate their ticket values or ask for a credit for future purpose. It’s a strategy that has seen around two-thirds of ticket buyers opt to give their money to the theatre or leave it at the box office. In smaller venues, that proportion may be higher still. Marie McCarthy at Omnibus Theatre – a small independent venue that receives no regular funding – told AP that 86% of its prepaid sales had been turned into donations.

Conversations with several UK venues suggest that ATG does not represent mainstream refund practices. Woodward described the refund policies of Delfont Mackintosh Theatres and Andrew Lloyd Webber’s LW Theatres as “exemplary”; HQ Theatres said “we are refunding booking fees and will continue to do so”; none of England’s major regional venues are withholding booking fees; and Glyndebourne is offering its clients a full refund and inviting donations, but does not offer credit vouchers or similar.