No let-up in arts A level decline

Early figures suggest that the trend away from studying some arts subjects at GCSE may be bottoming out, but A level entries continue to fall away across all disciplines. 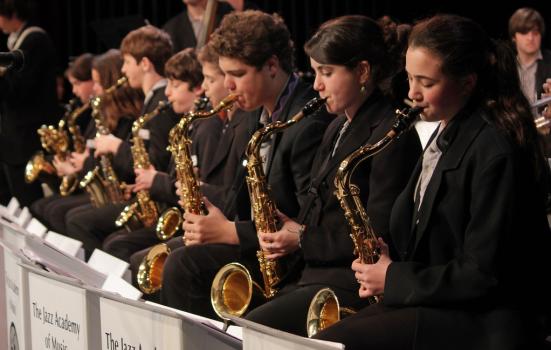 woodleywonderworks on Visual Hunt / CC BY

A five-year decline in entries for GCSE arts subjects is showing some signs of levelling off, but there is little to suggest this is the case at A level, according to new figures published by exam regulator Ofqual.

The number of entrants to Art and Design GCSEs grew for the second year running in 2019, with 15,000 more students sitting these exams this summer compared with last year.

The total number of students now taking Art and Design at this level stands at over 184,000 – the highest since records were first published in 2014.

The number of students taking Performing/Expressive arts at GCSE has recovered slightly, with 540 more students taking it this year than last. But the 9,300 students now taking this GCSE is still less than half the 20,500 who did so in 2014. 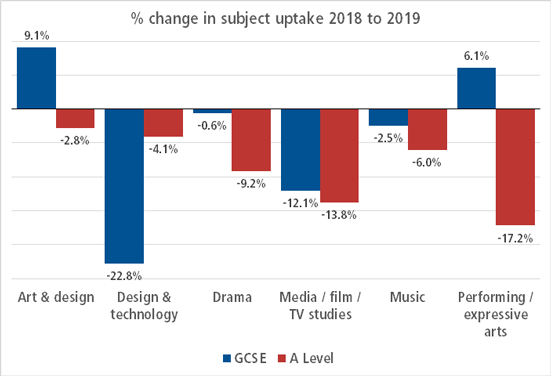 These were, however, the only arts subjects to see a year on year increase. In 2019 Design and Technology, for which a new curriculum was introduced, saw decline of nearly 27,000 entries, and Media/Film/TV studies lost a further 5,000 students.

In contrast, performing arts subjects have been more resilient. Music entries have fallen by over 900 (2.5%) and drama by 340, less than 1%. These declines are significantly smaller than in 2018, when over 6,000 fewer entries were recorded in these two subjects compared with the previous year.

Set against a backdrop of growth in student numbers and an 1% increase in GCSE uptake in all subjects though, it is clear that the declining popularity of arts subjects is far from over.

Ofqual acknowledges that “this decline indicates that schools/colleges are continuing to focus more on EBacc subjects than those subjects which do not count towards the EBacc.  Progress 8 and Attainment 8 measures are also likely to be influencing these patterns.”

Of the subjects that form part of the EBacc, all except German have seen an increase in take-up, while entries have continued to fall for most non-EBacc subjects.

At A level, the picture is less positive still. While A level entries for all subjects are down by just under 2% this year, entries to arts subjects have fallen by over 7%. 6,000 fewer entries were recorded across England.

The figures show that: 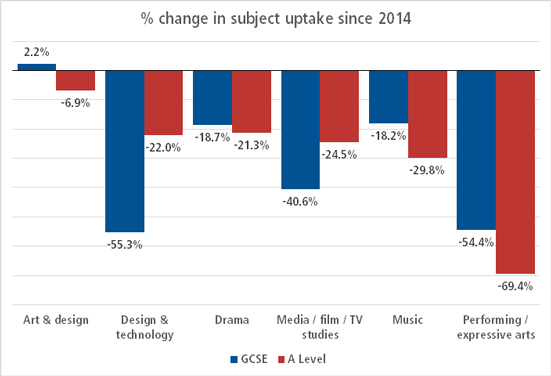 Student take-up of post-GCSE arts subjects has been further weakened by the decoupling of AS levels from A levels as part of the Government’s post-16 subject reform.

Under the old system, which has now been completely phased out, AS levels were studied for one year and contributed 50% to a two-year A level qualification. But AS levels are now stand-alone qualifications which do not lead to university access, so schools have abandoned them in droves, partly as a cost-cutting measure.

As a result, in addition to the decline in arts A-level take-up, there has been a further drop-off of almost 45,000 in the number of students taking arts subjects beyond GCSE since 2014.