Free Word to close after 12 years

The first National Portfolio Organisation lost to the effects of the pandemic will close its doors next week, leaving a gap in support for writers, artists and activists. 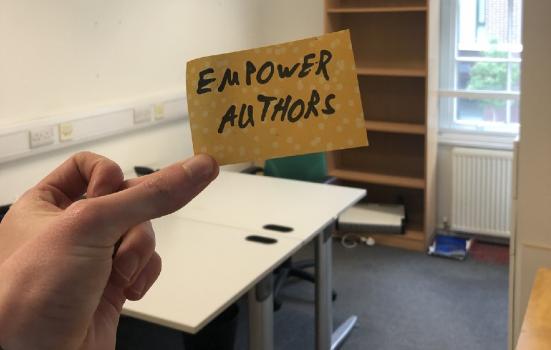 A note found during the clear out of Free Word's premises
Photo:

Free Word, a National Portfolio Organisation dedicated to the "power and politics of words", will close at the end of the month.

The multi-disciplinary arts centre says it "cannot see a way to generate the income required" to operate sustainably after its landlord and key funder, Norwegian free speech charity Fritt Ord, decided in April to sell its London home, divesting from commercial property in light of the pandemic.

Many of Free Word's supporters had hoped Arts Council England (ACE), which expressed interest in helping it continue off-site, would pull through with a solution. Though ACE has offered its continued support, "the organisation is unsustainable with ACE funding alone," a spokesperson said.

Most of its staff and events workers will be released from their contracts as of next week, with a small core team staying on until June to wind down the organisation.

Tenants of the building shared fond memories at "the end of an era".

"Thank you for 12 years of wonderful memories, activism and community and three years as a brilliant home," Reporters Without Borders Director of International Campaigns Rebecca Vincent tweeted.

"Over the years Free Word has worked with some of the most important writers, artists and activists of our time and I thank all of those who contributed to our mission."

Free Word was first concieved in 2004 by Virago Press Co-Founder Ursula Owen as a home for literature and freedom of expression organisations.

Fritt Ord purchased the former Guardian archives in Clerkenwell in 2007 and the organisation opened with the support of Arts Council England in 2009. It became a National Portfolio Organisation from 2011, receiving nearly £240,000 per year.

It has hosted cultural events and developed cross-border collaborations to profile underrepresented voices and champion experimental writing, developing work with more than 2,000 writers, artists and activists since its inception.

Alongside working with the likes of Selina Thomspon, Travis Alabanza and Michael Rosen, Free Word has produced creative work with Shelter, the London Renters Union and The Forgiveness Project. It has 21 associate companies including Spread The Word and the National Centre for Writing.

Free Word kept working during the lockdowns, producing 'Finding Power', a season of writing, podcasts and punk music challenging power structures, and 'How To Be Kind', a series exploring compassion in the face of 2020's global challenges through theatre, film writing and workshops.

Financial records show the charity was reliant on grant funding, despite increasing its income from desk, event space and meeting room hires.

Tim Duffy, Free Word's Chair, said its long-term goal is now to find "a like-minded cause to take on Free Word's existing assets and ambitions".

This may be challenging. The charity fills a niche in the arts sector, providing a unique combination of literary events and consultancy and professional development for writers alongside forums for political discourse, experimentation and activism.

Arts Council England currently has 48 literature organisations in its portfolio. Eighteen of those are based in the capital, including former Free Word Centre resident The Literary Consultancy and associate company Spread the Word.

Free Word's board says it will consider opportunities to pass the baton in due course.

Duffy said any surplus funds will be distributed in line with Free Word's charitable aims - promoting human rights, education and the arts.

"Free Word leaves behind a rich artistic legacy," he said.