A local authority under fire for censoring a politically-minded piece says it usually stays out of programming decisions - unless the programme conflicts with the views of its councillors. 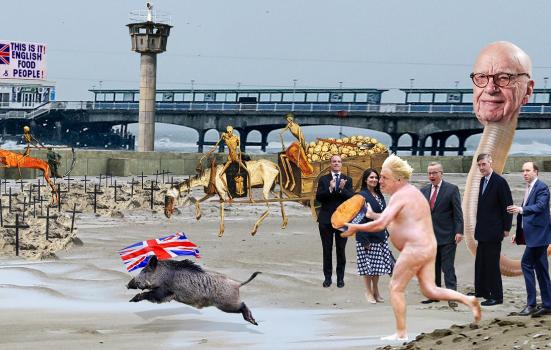 A section of the offending side of Cold War Steve's windbreaker
Photo:

A local authority that covered up part of a funded artwork it considered offensive says it was necessary to protect its reputation.

Artist Christopher Spencer, who works under the name Cold War Steve, said he was upset by Bournemouth, Christchurch and Poole Councillor Mark Howell's claim that his contribution to the Arts by the Sea Festival "portrays Bournemouth residents and the town in a negative light".

According to the artist, the 25-metre-long windbreaker was designed as a diptych: one side depicts "the positive characteristics and values of the country"; the other a "darker, but humorous, reminder of our current national sources of shame and embarrassment". Those include Nigel Farage, Dominic Cummings and Rupert Murdoch, as well as a naked Boris Johnson.

Cold War Steve said the censorship whitewashes "the failure of political leadership". He has released images of both sides of the windbreaker online and said he looks forward to hearing people's views on the sides of the artwork they can and can't see publicly: "Someone else made that decision for them, sadly." 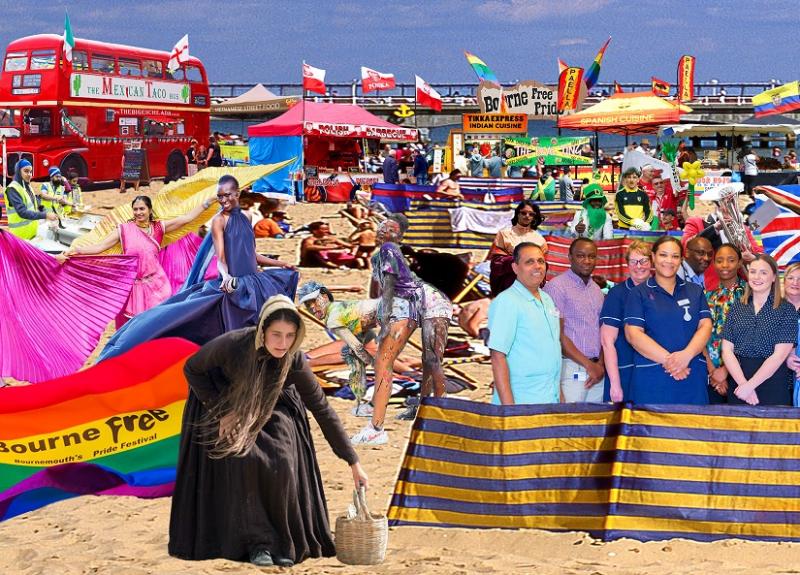 The council is not backing down.

Howell, Acting Leader and Portfolio Holder for Culture, said he felt the dystopian side of the artwork "risks causing further division at a time when we need to come together as a population".

"Artists are free to produce controversial work, and doing so often increases their profile. However, as a council, we have a duty to protect the reputation of our towns and their residents, and not to give the perception that we support any particular viewpoint."

He told ITV: "It was a privilege to be granted this opportunity and we think the artist has pushed the boundaries too far."

Thrown under the bus?

Howell said the council had been promised the artwork would be "playful" but did not like the commission, which it had planned to exhibit for free.

The festival, a National Portfolio Organisation of Arts Council England since 2015, is part-funded by Bournemouth, Christchurch and Poole Council (BCP). Its management team includes council officers, who raised the alarm a few days before it was installed on Boscombe beach.

Despite regular meetings and reports to the council during the festival's development, council officers only saw the final piece last week.

Conservatives lost their majority of BCP council seats at the last election, but are still the largest bloc, with Liberal Democrats second.

A council spokesperson said BCP has no policy around if, or when, it steps in on artistic programming decisions.

"Artistic programming decisions are normally left up to the festival organisers but are referred to the council where its reputation may be affected."

On Twitter, commentators lamented what they viewed as an infringement of free speech.

One local arts worker questioned why the festival would knowingly book a political artist if it didn't want political content, and asked whether Cold War Steve had been "thrown under the bus" by Arts by the Sea organisers.

When approached for further comment, the person declined because they receive council funding.

"The aim of the festival remains to bring an accessible and diverse range of art into ... public spaces for residents and visitors to enjoy for free."

Further comment from the festival released via the council said it tries to strike a balance between "the art we would choose to programme and the views of the elected members, who represent the people who live here".

While it is unusual for councils to make artistic programming decisions, it is not unheard of: ArtsProfessional reported in November last year that the Head of Middlesbrough Town Hall resigned in protest after Mayor Andy Preston allegedly demanded the venue book comedian Roy Chubby Brown.

Cold War Steve's work has stoked controvery in the past. Last week, a piece on display in Medway was torn off its stand and thrown into the river.

The artist said he had intended to "start a conconversation, raise some eyebrows and the odd smile too".

"It inspired one person to rip the artwork down and throw it in the river, which is a shame, strong feelings of a different kind, I suppose."

I have not yet seen what remains on display of Cold War Steve’s ‘Windbreak’ so I cannot comment on whether, to my eyes, it is offensive or not. But from what I have seen from the illustrations, it seems to be very much in the tradition of the late great innovator Richard Hamilton and thus more pastiche than original. But whatever Councillor Howell thinks, I suspect if it were left uncensored, its location, on a beach in the suburb of Boscombe (which is rather more radical and creative than much of Bournemouth), means it would, even in its full glory, have passed most people by, especially those likely to be offended. Your interesting report misses a few key salient facts. Whilst Arts By The Sea is branded as separate organisation, its Artistic Director, Andrea Francis, is a BCP Council Officer and the Festival is at least part-run out of BCP Council offices. So in reality BCP Council finds itself in the strange position of censoring itself. I think Councillor Howell will come to regret censoring this piece. It’s an unfortunate end to a short but exceedingly productive period in which far from being the philistine this action suggests, he has championed arts and culture in the new BCP Council, first by supporting a BCP Cultural Enquiry that took place last year and then by establishing, against Arts Council advice, a small Cultural Action Group (including myself) that has met regularly by Zoom to turn the wide ranging Cultural Enquiry findings into an action plan that will inform the soon-to-be established Arts Council funded Cultural Compact which will hopefully drive long overdue cultural development forward in the BCP area. Until a week or so ago, Councillor Howell championed this from his position as Cabinet Member for Regeneration and Culture (a very good portfolio pairing). Two weeks ago an opportunistic vote of no-confidence by Conservative Councillors removed Vikki Slade as the BCP Unity Alliance Council Leader and a vote last night for a new Council Leader has resulted in the Conservatives taking power with a minority administration. Such are the vagaries of local politics. How this will affect the long overdue, recent and very welcome drive for arts and cultural development allied to regeneration in the BCP area, one that Councillor Howell has ably led, only time will tell. Although there are clearly lessons to be learnt from this, (including delegating decisions to Senior Officers) in that context, the ‘row’ about censoring Cold War Steve is a bit of a minor sideshow that one hopes will quickly get washed away with the tide.