Organisations are finding themselves in bidding wars over a shrinking pool of quality candidates. Is this the start of a talent drain? 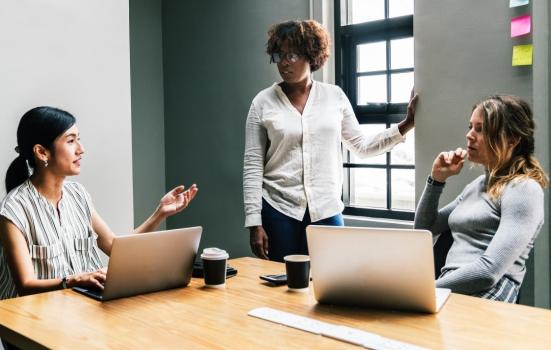 Arts organisations are struggling to recruit post-pandemic amid a resurgence in job opportunities.

High competition within and beyond the sector has created a seller's market for job seekers and some companies are finding themselves in bidding wars to secure candidates.

But as the sector charts an uncertain future, a recruitment specialist says companies have become more risk averse, "reverting to type" rather than seeking innovative candidates with the skills they need to recover.

Workforce data from the Office for National Statistics shows job opportunities in arts and entertainment jobs started to recover in May 2021 when venues could partially reopen, with the workforce now about 88% of its pre-pandemic size.

11,000 new jobs hit the market in between June and September.

The number of job listings on our site more than doubled over the six months to September. When we surveyed the sector, 71% said it was more difficult to recruit now than before the pandemic.

"For roles that we would typically expect to have a large number of applications, we have struggled," one respondent commented.

Creative industries recruitment specialist William Pringle, of Berwick Partners, doesn't believe we're experiencing a mass exodus but rather a reshuffling of the workforce.

"There's a lot of churn going on - to be honest, I think that's going on across all sectors.

"As the market starts to open back up again and there is a lot of positivity out there people think the grass is greener on the other side."

Job listings on ArtsProfessional fell by two thirds during the first six months of the pandemic.

"Recruiting in the cultural sector last year was very barren. Everybody was at panic stations," Pringle says.

"That continued until about September last year [when] we started seeing little bubbles appearing."

Interest picked up "significantly" in March, though it is predominantly smaller independent companies that are hiring rather than Arts Council England or DCMS-funded institutions, some of which have experienced swingeing job cuts.

ONS figures show an 54% increase in arts, entertainment and recreation job vacancies last quarter. The size of the workforce, however, only grew by 7% in between January and April (statistics for the second quarter are not yet available).

Respondents to our survey said it was harder to "stand out" as an employer if you couldn't afford premium advertising.

One said an extra budget for recruitment wasn't enough to ride the wave.

Finding freelancers too has become tricky. 35% of survey respondents said they find this harder than before Covid-19.

It appears some are finding work in other industries: "They tell us the work is less interesting and they don't enjoy it as much but with the ongoing lack of certainty... they don't want to take the risk."

Pringle summarised: "With more choice, candidates are getting pickier."

In our survey, half of respondents said hiring executive level staff got harder over the past year.

Anecdotally, many directors and chief executives have stayed to see their organisations through the pandemic - but as more opportunities emerge, that trend could change.

Preferred candidates for the top jobs were previously more likely to have come from outside the sector, bringing entrepreneurial skills that organisations sought to grow their income.

Pringle said more private sector professionals are eyeing public sector and not-for-profit roles right now - the pandemic has made many rethink their careers in a more altruistic light.

But organisations, fearful the turmoil of Covid-19 is not yet over, are becoming more risk averse and sticking with who they know.

This could be a problem in the post-pandemic era: "I don't think the cultural sector has necessarily embraced digital capabilities," Pringle said.

"If you haven't been doing digital work, you need to recruit digital people.

"The question is whether or not [organisations] are going to take a calculated risk on someone different."