Following a £3m research and development phase, diverse teams of artists, scientists and engineers will receive £10m each to bring their "showstopping" ideas to life. 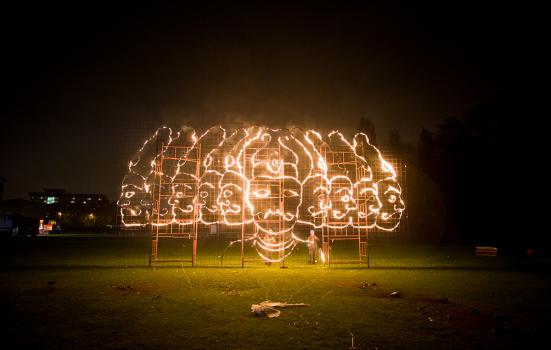 Rama and Sita - Walk the Plank at Manchester Diwali
Photo:

From a paid £3m R&D process with 30 teams, ten projects bridging science, technology, engineering, arts and mathematics (STEAM) have each received £10m commission to bring their ideas to life. They were required to represent the arts, as well as at least two other STEAM sectors.

Half of the collectives are led by cultural organisations across the country, including National Theatre Wales, Glasgow's Aproxima Arts Collective and Walk the Plank in Salford.

The festival will be renamed before it launches later this year. Full details about the successful projects "are being kept under wraps" at this stage, a statement released Wednesday says, but each is a large-scale public engagement project that "will take us from the land to the sea to the air and even outer space, using pioneering technology and the power of imagination".

Chief Creative Officer Martin Green praised the quality of the 30 proposals: "What they came up with has exceeded our expectations... which made deciding which 10 teams to commission very difficult."

Contrary to controversy over the value of the so-called 'Festival of Brexit' when so much of the creative sector is struggling, Green said the selection process and the final commissions are "open, original and optimistic".

"We believe the extraordinary breadth of talent, their thrilling ideas and geographic spread, will be ground-breaking, inspiring and exciting for millions of people across the UK and further afield."

Culture Secretary Oliver Dowden added: "‘These ten showstopper projects will wow audiences in towns and cities right across the country, and show off the UK and its creative genius to the world... they will make 2022 a year to remember, bringing the nation together as we build back stronger from the pandemic."

The 20 teams not selected will receive support from the festival if they wish to develop their projects further.

The successful teams and their projects are:

'Once in a generation'

John Wassell, Creative Producer and Co-Founder of Walk the Plank, said Festival 2022 offers a "once-in-a-generation opportunity" to bring together the skills of artists, engineers and technicians.

The company has a 30 year history of working in public spaces. Its team will include freelance theatremakers, dancers, musicians, artists and lighting and special effects specialists, as well as engineers and the Head of Communications for National Parks UK.

"Our project will engage people of all ages and cultures in a celebration of our landscapes and the lives within them. It considers them as places worth enjoying and protecting for everyone, forever," Wassell said.

Other teams exhibit an equally diverse mix of professionals. Nerve Centre Collective, for example, includes a composer, an illustrator, a filmmaker, an author, Queen's University Belfast and the Astrophysics Research Centre.

The British Antarctic Survey will work alongside an Amazon engineering executive, a space engineer, an author and a curator for NEWSUBSTANCE Collective's project.

NEWSUBSTANCE and other teams have been approached for comment.

I do hope that in the future they all use language that we can all understand and use to inspire our own imaginations about each project. I have degrees, and qualifications coming out of my ears and have worked in the arts for a very long time but today I read these wordy concepts and struggle to grasp what they are and what they might be researching and creating. I feel they have put up a massive barrier to stop others actively contributing because they don't use 'their language'. Am I stupid, out of touch or am I calling out the Emperor's new clothes? I genuinely don't know.