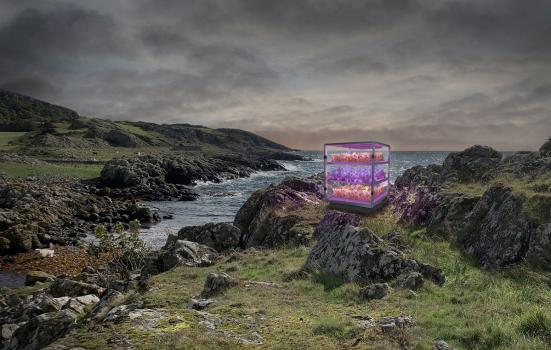 A representation of one of Dandelion's growing cubes
Photo:

Next year's cultural mega event will showcase the best in cross-sector innovation - and provide critical opportunities for creative work.

Hundreds of creatives are already working on the commissions, with hundreds more jobs to be created over the coming months.

Volunteering roles, paid opportunities and training will be available through several of the chosen commissions, and engagement with schools is a major part of the programme.

"Everyone should have the opportunity to experience world-leading arts and culture no matter what their background or where they’re from - and that’s what UNBOXED is all about," Culture Secretary Nadine Dorries said.

Once derided as the Festival of Brexit, the project's launch provoked a small but expected backlash among those who feel it masks the UK Government's indifference to the sector's recent struggles: "What's the point when your policies limit the ability of UK creatives to export their abilities to the world?", one commentator asked.

But most expressed support for the eight-month spectacle, saying it will "prove the naysayers wrong".

"Unboxed 2022 is going to celebrate the best of British and will play a critical role in our economic recovery," Leeds 2023 External Relations Director Abigail Scott Paul said.

Journalist Kenny Farquharson commented: "We can all celebrate creativity and community across these islands regardless of our individual constitutional politics."

The four nations and some local authorities welcomed commissions that are sited in, or will tour to, their cities next year.

Welsh Deputy Minister for Arts and Sport Dawn Bowden said GALWAD, a multimedia, multi-lingual project led by National Theatre Wales, is "an invitation" to join a conversation about the country's future wellbeing.

"It will invest in the creative and technology sectors , creating opportunities for under-represented talent and supporting the creative industries as we emerge from the pandemic with investment and job opportunities."

One project is offering £1m in bursaries to young creatives.

Tour de Moon will give up to 875 bursaries to 18-to-25 year olds across eight strands of work to "amplify a plurality of young creative voices".

"It might be a piece of music woven with the sounds of the galaxy, a film exploring our relationship with the moon, a concept for a float or a digital installation, a script for a play, an online experience or a DJ performance."

StoryTrails is recruiting 50 creatives for paid work in augmented and virtual reality and 3D software - "even if you've had no previous experience working with these technologies".

Successful applicants will receive training from the National Centre for Immersive Storytelling and StoryFutures Academy, the commission's lead organisation.

The first ever artwork to be seen with your eyes closed will double as a mass research project.

Dreamachine, an experimental artwork projecting kaleidoscopic light patterns into viewer's minds, will ask participants to contribute to international scientists' investigation of "one of the greatest mysteries remaining to science: the human mind".

A Dreamachine digital participation programme for 12,000 schools will be announced in more detail early next year.

In Scotland, Dandelion - a reimagined series of harvest festivals - will distribute "growing cubes" to 100 secondary schools, as well as 200 tonnes of potato seedling and growing medium to another 400.

Altogether, 10,000 pupils are expected to take part in the Dandelion School Growing Initiative.

About Us, which works with artists in Caernarfon, Derry-Londonderry, Hull, Luton and Paisley, is collecting young people's poetry for an anthology and outdoor installation.

A free programme of coding and poetry workships will be delivered to 50 primary schools, with digital resources packs available to teachers and youth workers across the UK.

UNBOXED Creative Director Martin Green said it was important to "break down siloed walls" between subjects to advance creativity in education.

"Ultimately UNBOXED is about exploring the importance of creativity in generating new ideas and opportunities that shape the ways we work, live and play, and in finding solutions to problems."