A year before Tate is due to renew its sponsorship with BP, Platform London is curating a free, completely unauthorised festival inside Tate Modern. 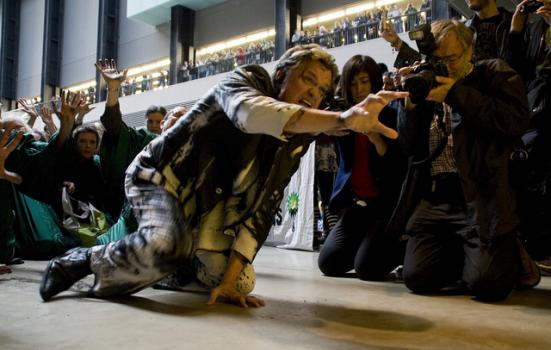 A “cheeky, serious and unauthorised” protest festival exploring the arts and climate change is to take place inside Tate Modern next week. Hosted by Platform London, ‘Deadline Festival’ is scheduled a year before Tate’s sponsorship deal with BP expires, which was revealed in a recent court case to be worth between £150k and £330k a year. It will bring together “artists and actors, professors and politicians to explore the creative process of building a fossil free culture”.

The festival announcement follows news that the Science Museum will not renew its sponsorship deal with oil-giant Shell and calls from a series of internationally renowned artists – among them Bjork and David Bowie – for governments to reach an ‘ambitious’ deal in the upcoming UN climate change conference in Paris.

The festival, which will run 4-5 December, includes a screening of Naomi Klein’s ‘This Changes Everything’; a panel on art and politics with Julie Ward MEP, Green Party leader Natalie Bennett and recently re-instated National Gallery Union Organiser Candy Udwin; and a performance of a short play by Caryl Churchill. In addition, the organisers have issued an open invitation to the public to ‘seed-bomb’ Abraham Cruzvillegas’ ‘Empty Lot’ exhibition in the Tate Modern’s Turbine Hall by planting seeds in the geometric sculpture made of scaffolding, wooden planters and soil from London parks.

This marks the first time Platform London has programmed a series of events, aiming to challenge the fact that previous protests were more like ‘spectacles’ in which the public “mostly watched rather than joining in”. It is hoped that the advance notice will engage a broad range of people in the planned workshops, discussions, film screenings and performances.

Platform London’s Anna Galkina said: “Tate is a public art institution and the idea behind public art is to create a dialogue. The gallery management has understood during previous performances that the interventions are a form of artwork themselves, and we’re hoping that they respect that during this festival too.”

Tate emphasised the importance of BP’s sponsorship of the arts but declined to comment on the festival.