Three-quarters of people in the arts volunteer before finding paid work, survey suggests

Research by Jerwood Charitable Foundation found only a quarter of people working in the arts entered the sector with a paid position. 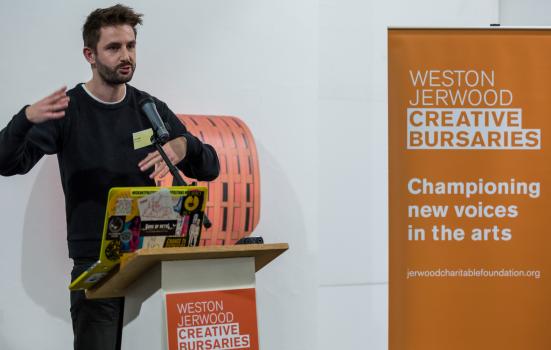 Of these, 59% volunteered for at least six months on a full-time or part-time basis, including 12% who worked unpaid for over three years.

The figures have emerged from an online poll of 118 arts professionals involved in the Weston Jerwood Creative Bursaries scheme. The scheme saw 40 arts organisations across the UK recruit graduates from low income backgrounds, on merit, into paid roles.

When the respondents finally found paid work, 90% earned under £20k pro rata in their first paid job, with 35% earning under £10k pro rata.

The findings were unveiled at a celebration of the Creative Bursaries scheme in London. Of the 2016 cohort of bursary recipients, 23 people (58%) have had their placements extended by their host organisations.

Aaron Wright, a former recipient of a Creative Bursary and currently Artistic Director of Birmingham’s Fierce Festival, said: “I would never have got to the position I'm in now if it weren't for the Creative Bursaries. In enabling the possibility for aspiring graduates from low income backgrounds to work in world class organisations such as the Live Art Development Agency, Jerwood Charitable Foundation are simply levelling the playing field.

“If we really want to see significant change in the make-up of our arts workforce in our lifetimes, then we need more of these unapologetic interventions, in which Jerwood Charitable Foundation have led the way. I feel very lucky to have been given the opportunity to fulfil my potential, and am certain that the future of good art is dependent on many more people being afforded the same chances too.”

Kate Danielson, Director of the Weston Jerwood Creative Bursaries, said: “The arts have long been seen as the preserve of the white middle classes, and this programme is opening up access for those with the potential but without the finances and support networks to find their way in. We are supporting the potential arts leaders of the future, and, by giving these young people the best possible start to their careers, contributing to a thriving and diverse arts sector.”

The Jerwood Charitable Foundation and Garfield Weston Foundation have committed funds to enable a third edition of the bursary scheme, aiming to launch in 2017.