The programme will be in place by May 2019, with a focus on international cultural partnerships. 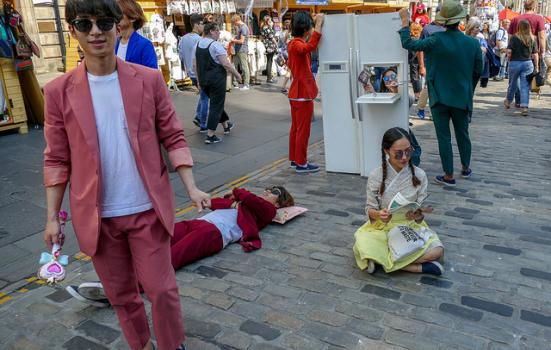 Artists at the Edinburgh fringe
Photo:

The Scottish Government is planning to create a new fund to protect cultural organisations from the impact of Brexit.

The International Creative Ambition Programme is set to be in place by May 2019. It will support international cultural partnerships that develop new work and “support talent through international collaboration and exchange”.

“This is particularly important against the backdrop of Brexit,” says the Scottish Government’s 2018/19 programme, where the fund is announced.

“Where Brexit threatens our ability to connect and prosper we will do what we can for Scotland to flourish”, it says.

“We look forward to finding out more about this new fund in due course,” a spokesperson told AP.

Few details of the fund have been unveiled, meaning it is not known which organisations will be eligible and how much support will be available.

But its motives are framed by the country’s upcoming Culture Strategy, due by the end of 2018, which is outlined in the Programme for Government. The document says the strategy will use culture to improve wellbeing, increase economic growth, and force “long-term change through greater collaboration and integration across culture, communities and policy development”.

“We want to bring about a shift in how society and government view culture to realise the full potential of culture for everyone and every community,” the plan adds.

The Government also states its desire that the rest of the world see Scotland as “a creative, open, welcoming and outward-looking nation”.

The programme comes weeks after politicians gathered in the country for the Edinburgh International Culture Summit were criticised for blocking international artists from visiting the country and sharing ideas.

But pointing to the Scottish politicians organising the conference, he said: “Unfortunately the very same city today, because of your policies, doesn’t allow visas to many communities – to many people who would like to come here and participate in the incredible offering of culture. We need to break down our boundaries.

“On one hand Europe is talking about the internet democratising us and allowing us all to come together across the world. At the same time, every country, every city feels threatened and threatened by artists.”

Scotland’s cultural strategy will also include pledges to drive forward the next phase of the country’s youth arts strategy, to respond to an ongoing review of music education undertaken by Royal Conservatoire Scotland, and to launch a new place-based arts initiative called the “cultural youth experience fund”.