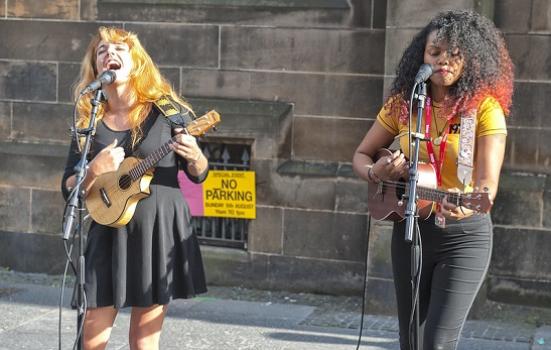 A musical duo performs at Edinburgh Fringe in 2018
Photo:

Scotland’s new Culture Strategy enshrines in policymaking that “culture is worth more than any financial value that can be placed on it,” the country’s Culture Secretary Fiona Hyslop says.

The document, released on Friday, includes £1.4m worth of commitments to ‘strengthen, empower and transform’ the cultural sector. A £280,000 ‘Arts Alive’ programme will fund up to 250 cultural “sessions” at schools, nurseries and libraries until 2021 and £40,000 will be spent on a pilot to recruit volunteers from diverse backgrounds to work in Scottish museums and galleries. In addition, a new National Partnership for Culture led by former Edinburgh International Festival Managing Director Joanna Baker will advise ministers on opportunities for cross-sector collaboration.

The remaining funds will bolster existing programmes ‘[Supporting Expressive Arts in the Curriculum’ and ‘Creative Communities’ and develop the Arts, Culture, Health and Wellbeing Network “to include all forms of cultural engagement”.

In its foreword, First Minister Nicola Sturgeon says the strategy challenges the public sector to think about how culture can make Scotland more inclusive and innovative.

“And it makes clear that culture is a cross-government priority – one which all ministerial portfolios in the Scottish Government contribute towards.”

Hyslop said “a key pillar of the strategy is the recognition that we need to do more to nurture artistic talent and support artists”.

However, the document contains little to directly support artists, instead focussing on initiatives to increase work opportunities in the short term, aid advocacy in the long term and improve diversity in the sector.

The strategy says: “It is clear from the engagement events and consultation responses that there is overwhelming support for measures to achieve greater diversity of employees in cultural organisations and funders including senior teams, boards and volunteers, in addition to providing more help for accessing funding and other mechanisms of support.”

Other key commitments include:

A parliamentary inquiry into Scotland’s arts funding system completed in December said at least 1% of Scotland’s £425bn budget should be committed to culture. Joan McAlpine, Convener of the Culture, Tourism, Europe and External Affairs Committee, said public arts funding “will only become sustainable if artists are at the centre of policy and paid the fair wage they deserve”.

The strategy says “fair pay is a fundamental aspect of fair work” and that the Scottish government will advocate for “a living wage for the cultural and creative workforce”.

It suggests Creative Scotland already provides this despite its lack of minimum pay rates for artists on funded projects: “Creative Scotland is committed to fair work and … to ensuring that artists and those professionals working in the creative community are paid fairly and appropriately for their time and effort. To support this, Creative Scotland has published Rates of Pay Guidance on industry standards, union rates and codes of practice from key lead bodies.”

Fair Work criteria – investment in skills and training, recognition for trade unions, action to tackle the gender pay gap and “no inappropriate use of zero-hours contracts” – will be attached to “as many Scottish Government grants as we can by the end of this parliament,” the strategy says.

The Government will work with Creative Scotland to understand the potential impact of this on its grant schemes, noting the challenges presented by the current funding environment.

The new National Partnership for Culture is charged with building on last year’s inquiry, which also recommended re-establishing regional arts officers, creating a ‘percentage for the arts’ scheme that would require major public construction projects to invest in local arts, and an ‘Arts Act’ that would underpin a framework between national and local government to support the arts.