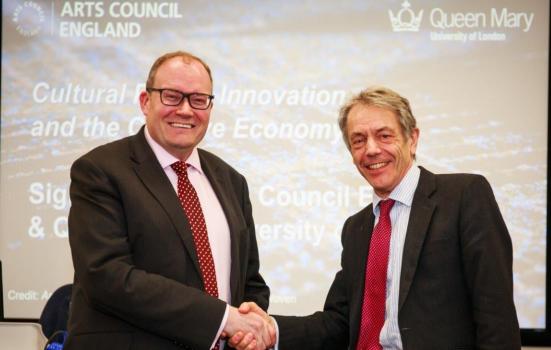 Queen Mary University of London (QMUL) has become the latest university to sign a Memorandum of Understanding with Arts Council England (ACE).

The partnership will see the two parties collaborate on the development of “creative leadership programmes”, collaborative research projects and placement opportunities for students and staff.

In addition, it will focus on developing cultural and artistic engagement in London’s East End.

“[QMUL] is a hub of excellence in its community and a really significant partner for the Arts Council,” said Darren Henley, ACE Chief Executive.

He continued: “QMUL is perfectly positioned to be the ‘place-maker’ around and from which partnerships can form.

“We’re very excited to see the impact of our work together, both internationally and locally.”

The new Memorandum of Understanding (MOU) follows similar agreements between ACE and Bristol City Council and universities around the country, including UWE Bristol and De Montfort University.

Based on a “mutual and long-standing commitment to diversity”, the partnership is billed as a “major opportunity” for QMUL to both benefit from the national funder’s global reputation and shape cultural policy in London and internationally.

The initiative was welcomed by Professor Andrea Brady, who is leading QMUL’s five-year arts and cultural strategy. She said ACE’s expertise on inclusive arts projects has already been of benefit to the University.

Speaking about the MOU, President and Principal of QMUL Professor Simon Gaskell said: “We’re honoured and excited to sign this agreement with the Arts Council.

He continued: “We believe that universities have a vital role to play in the cultural life of society and of our local communities.

“Fundamentally we embrace the idea that the arts are a public good, and should be for everyone.”

The growth of online sales has expanded the craft market and provided more opportunities for disabled people, but fears are growing over...

Thursday, 28 May 2020
82% of businesses in the ‘Arts, Entertainment and Recreation’ industry in England are estimated to have temporarily closed or ceased trading through the coronavirus crisis – the highest of all... read more

Thursday, 28 May 2020
Following last week’s announcement of the membership of the DCMS Cultural Renewal Taskforce, concern are growing that major institutions are dominating influential forums where the future of the arts... read more