In his sector review of the creative industries, former ACE Chair Sir Peter Bazalgette has underlined their importance to the UK’s future success. 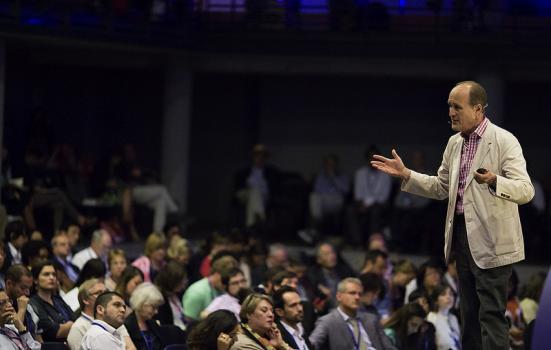 The Government should set up a £500m fund to support creative clusters in the regions and address the “unbalanced” spread of creative industries jobs, an independent review of the sector has urged.

Bazalgette concludes such changes, alongside a full implementation of the proposed ‘sector deal’, could create up to 1 million new jobs by 2030 and ensure the sector is worth £128bn to the UK economy by 2025.

The document has been released ahead of the Government’s Industrial Strategy, which is intended to help spread growth evenly across the country, and on the same day the Government opens an £80m investment fund for creative research and development.

Speaking about his review in the context of Britain’s uncertain economic future, Bazalgette said: “In every scenario the creative industries are set to be of central importance to the UK’s future success. We have two great assets: the English language and our creativity, but the skills and business models of this sector are of increasing importance.

“My report recommends simple ways of maximising the potential of this crucial sector, which I’d like to see become part of the Government’s developing Industrial Strategy.

“I urge Government to ensure the final strategy is based on a fundamental understanding of what these industries need to thrive.”

Culture Secretary Karen Bradley welcomed the report, emphasising the Government’s commitment to removing barriers to growth. She said the challenge is now to “turn the ideas into a strong partnership which is credible and has buy-in from both Government and industry”.

Bradley continued: “I encourage the sector to do what it does best – think creatively and work with us on achieving a compelling and ambitious deal that allows the UK creative industries to continue to thrive.”

The review, announced in January, makes recommendations for how to promote innovation, strengthen skills and talent pipelines, and improve access to finance. It sets out how Government and industry should work together on a ‘sector deal’ for the creative industries, one of five key areas identified by the Government earlier this year.

Bazalgette suggests the £500m creative clusters fund should be awarded over five years to “key creative clusters”, drawing on models already seen in cities such as Manchester, Dundee and Cardiff. These would be coordinated locally, backed by ‘critical alliances’ between local authorities, higher education, local enterprise partnerships, small creative enterprises and property businesses.

“I am recommending a bottom-up process which allows localities, which often have a firmer grasp of their growth potential and needs than central government, to direct policy development. This will also solve the problem Government has engaging with fragmented sectors,” he explained.

Bazalgette called for the introduction of a ‘Creative Leaders’ scheme to support the proposal, adding: “I believe strongly that if Government can get the leadership, financial, advisory and skills support right for creative clusters then they will deliver a model that solves problems for other significant parts of the economy.”

The former ACE Chair said his proposals are “neither exclusive nor exhaustive”, and added the report is just a first step, calling on Government and industry to “take it forward with enthusiasm”.

John Kampfner, CEO of the Creative Industries Federation, praised the review and the “growing acknowledgement by government that the creative industries are an essential part of the country’s future growth”.

“Building the pipeline of talent to supply the creative workforce is crucial to ensure the continued success of the sector – the fastest growing of the UK economy worth £87bn,” he said. “That is why the Federation particularly welcomes the initiatives around skills including our idea for a Creative Careers Campaign within the Bazalgette review.”

But he expressed concern about the implications of Britain’s exit from the European Union and the sector’s reliance on international workers. “With the end of freedom of movement on the horizon, there is a real risk of a post-Brexit creative brain drain,” he said.

“It is essential Brexit and its implications are a consideration when determining how best to support the sector’s continued growth. We must be able to continue to attract the international talent the creative workforce needs.

“That is why the Federation is currently working on a report examining the role of international talent on behalf of the sector. We will be reporting on our findings in mid-October.”

Publication of the report coincides with the Government opening the £80m Creative Industries Clusters Programme, which was announced in August and will be led by the Arts and Humanities Research Council (AHRC).

Business Secretary Greg Clark said this would deliver “a further boost” to the creative industries and help “spread prosperity and grow the creative skills base across the UK”.

Eight areas of the country will be supported to establish ‘Creative Research and Development Partnerships’ between universities and businesses, which will foster innovation by companies of all sizes.

The programme has been funded with £39m from the Industrial Strategy Challenge Fund with match funding from universities and private sector organisations.

The partnerships will respond to challenges identified by the creative industries in their cluster and Government hopes they will “help catalyse economic growth and provide the skills needed for the jobs of the future”.

In addition, a new Policy and Evidence Centre will be created to fill gaps in understanding of the creative industries, such as how they compare internationally and the full value of their economic contribution.