Creative industries to be “at the heart” of new industrial strategy

Business Secretary Greg Clark has promised that the creative industries will have a big part to play in the Government’s new strategy. 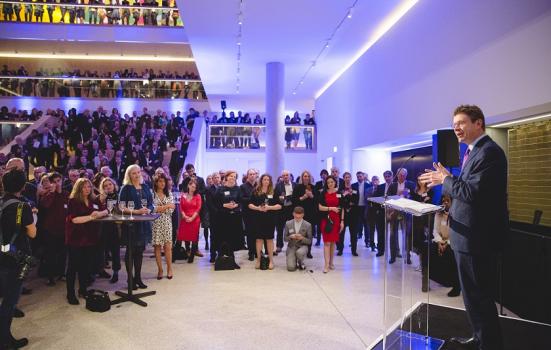 The creative industries will be “at the heart” of the Government’s upcoming industrial strategy and have a “big part to play”, cabinet ministers have promised.

Recognising the industries’ place as the UK’s fastest growing sector, both Culture Secretary Karen Bradley and Business Secretary Greg Clark have sought to reassure the sector that the Government understands the importance of the creative industries to the UK economy.

“Any good strategy of course has to go on its strengths,” Clark told the second anniversary celebration of the Creative Industries Federation earlier this week. “You couldn’t fail to have the creative industries as absolutely foundational to that industrial strategy.

“You will see that you will have a big part to play.”

Clark also hinted that the industrial strategy would “take the same spirit” as the city deals set up around England, which have given cities more power and resources to make decisions that affect their areas.

The comments mark a change in tone for the Government. The creative industries were excluded from both the coalition government’s plans for an industrial strategy and from ministerial responsibilities under the Department for Business, Energy and Industrial Strategy.

They come weeks ahead of the publication of a discussion paper on the industrial strategy – due by the end of January – and follow consistent lobbying by the Creative Industries Federation for the strategy to include the creative industries.

The Federation set out the benefits of a more holistic strategy in its annual report. It said: “An industrial strategy would encourage government departments to assess the impact of any given policy – from education to funding decisions – on the creative economy.

“We see this as an opportunity for the sector to help the government correct a previously piecemeal approach.”

Chief Executive of the Creative Industries Federation, John Kampfner, welcomed the comments. “We look forward to working with you and your officials as you progress the industrial strategy,” he said. “I’m sure we’ll all be heartened by the acknowledgement of the creative industries as the fastest growing sector.”

In addition, Bradley praised the Federation for its advocacy in arts education. “I think it’s only because of the work that you did that history of art A-level has been saved for the nation,” she said.

“I now want to make sure we get lots and lots of young people studying that A-level.”

But outgoing chair of the Creative Industries Federation, Sir John Sorrell, struck a more sombre note. He warned that current education policy is the ‘Achilles heel’ of the creative industries, pledging to keep fighting for a “rounded education policy which nurtures creativity”.

The English Baccalaureate, shown to be squeezing arts subjects out of schools and disadvantaging pupils with lower attainment, still remains official government policy.