Arts organisations benefited from the digital development opportunities presented by The Space, but limited marketing, safe content and technological barriers undermined its impact. 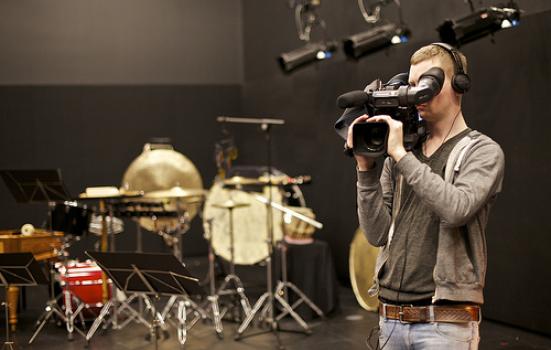 The filming of '8 Songs for a Mad King', a production on The Space pilot
Photo:

The six-month pilot of the experimental digital arts media service and commissioning programme ‘The Space’, run by the BBC in partnership with Arts Council England (ACE), achieved a step-change in developing digital skills among the arts providers who participated in the project. But according to a Summary Evaluation of the project compiled by consultants MTM London, important questions hang over the success of the pilot in audience development terms and the extent to which it facilitated artistic innovation. The publication of the Evaluation coincides with the announcement by BBC Director General Tony Hall of plans to re-launch ‘The Space’ in Spring/Summer 2014.

ACE’s £3.5m investment in The Space enabled 50 arts organisations to create new digital work and participants overwhelming felt that the project was successful in its aim of building their digital capacity. Feedback about the quality of the content, however, was mixed. The majority of projects were felt by the arts sector to have either delivered a high quality artistic experience or to have been highly innovative, but there was significant criticism of the content being “too safe” and “too reliant on video and ‘capture’ projects.”  Of the three strands of commissioning, only £870k was spent on creating new work, while the remaining content involved capturing an event or artistic work (£1.42m) or providing additional content about an artistic work (£910k). Unsurprisingly, the review found that “participants were more reserved about the degree to which the content elsewhere on The Space was innovative and high quality than they were about their own project.”

Many participants were also disappointed by the size of The Space audiences and levels of awareness of the service. During the 6-month pilot the site attracted 630,000 users and an average of 30,000 unique users a week, 43% of whom were international. Typical visitors to The Space were already keen online and live arts consumers: over 83 per cent of the 3,600 respondents to an online survey had attended three or more arts events in the past year. The majority were male, and Mosaic profiling suggests a predominance of “well-educated city dwellers”, while 13% of respondents described themselves as being “limited by a disability”.

Among audiences, the popularity of different types of digital content varied widely, with a small number of projects being disproportionately popular among visitors. John Peel’s record collection secured 118,000 unique users – more than four times the number of visits as the next most popular commission, the Globe to Globe project by Shakespeare’s Globe, which attracted around 23k unique users. Overall, only five projects saw more than 10,000 unique users on The Space, and 35 of the 51 commissions attracted fewer than 2,000. But the evidence points to a potentially wider impact through arts organisations’ own channels. Britten Sinfonia’s ‘Listening Machine’ attracted only 3,800 unique users on The Space, while its own micro-site reached a further 38,000.

The disappointing audience figures on The Space could be in part attributable to the technical problems that beset the service. Nearly a quarter of visitors experienced problems such as unreliable streaming, or device, platform or browser compatibility issues. Site navigation also proved to be a barrier for a significant number of users, and those with visual or auditory impairments rated the accessibility of the site as ‘very poor’.

The Evaluation makes a series of recommendations for The Space when it is re-launched in the Spring, not least a “better resourced marketing effort to raise public awareness.” Resources for brand development, marketing and communications were limited to less than 1% of the overall project budget. Resolving technical issues, improving site navigation and better integration with social media are also on the list; and the authors call for the development of a commissioning strategy which “differentiates more clearly between different types of projects while continuing to accommodate a range of content, from more mainstream, popular commissions designed to attract large audiences, through to more innovative and experimental projects.”

The Space pilot service will close at the end of this month, when all current content will be taken down. In future, it will be run as a joint venture between ACE and the BBC, operated independently as a Community Interest Company with Directors appointed from within the Arts Council and the BBC. Artists and arts organisations wanting to be involved in the new service will be able to submit work through a rolling programme of Open Calls, starting in early 2014, and successful applicants will be supported by partners from the cultural, broadcasting and digital world. In addition, The Space will co-commission larger, more ambitious digital projects: organisations including Artangel, The British Library, Cornerhouse, Fuel, Tate and BBC Writers Room have already signed up in principle. Tony Hall said: “We want to support a new generation of talent - and I'm really looking forward to seeing artists surprise and delight us all on The Space. We had great success when we ran the pilot together last year and I felt passionately then that it was something we needed to develop.”