Danger for smaller pantos as sales lag by £23m

A decline in group bookings - mostly from schools - is driving a loss in income that is expected to hit smaller producers hardest. 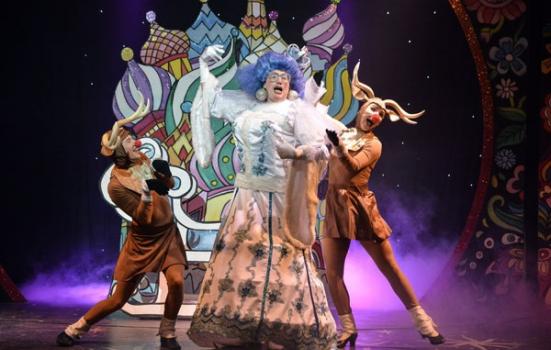 Sales for Christmas pantomimes are facing a £23m drop in the UK and Ireland this year.

A "dramatic" 54% collapse in large group bookings - mostly from schools - is driving a loss in income that is expected to hit smaller producers hardest, data from TRG Arts and Purple Seven indicates.

Organisations that sold more than 20,000 tickets in 2019/20 Christmas season have fielded the smallest decreases in sales and revenue. The best performing pantos are achieving 60% of their 2019 ticket sales - but the average across the companies surveyed was just 17%.

"Absolutely it is the smaller pantos where we're seeing a lag," David Brownlee, Managing Director of Purple Seven, says.

"It's not shocking... but it does back up the broader issues we're seeing, that these big blockbusters are doing better."

The findings come as UK Theatre and the Society of London Theatre launch a new campaign #BackOnStage to celebrate the return to live performance and encourage attendance at shows this autumn.

Producers and venue managers unsure of what the next few months will bring are hesitant to promote their pantos now, but Brownlee says "confident marketing and investment" are most likely behind the stronger performance of well-known and popular titles like The Nutcracker.

"Those producers and venues making an investment in marketing are seeing a return on it," she said.

"There is still a long way to go and with concerted action in every venue and collectively across the industry, this Christmas could still be a good one for theatres."

Sales for popular shows are higher than for UK and Irish productions generally, which are heading for a £32m decline.

Unlike all other genres, sales and revenue from groups of 30 or more have grown for The Nutcracker and other 'blockbuster' productions.

But while ticket sales for 99 pantos this year are higher than before the pandemic, they remain under 500,000, compared to three million sales for 199 pantos in 2019/20.

"Group sales that would have been there in the summer just aren't," Brownlee said, predicting "a really tough autumn".

"That's why we're saying September is so important. To just wave goodbye to the group bookings is a big assumption."

Last year, the National Lottery planned to buy up empty seats at pantos if social distancing made them unviable.

Brownlee said sales in England are recovering faster than in Scotland or Wales, where most performances remain socially distanced despite restrictions having been relaxed.

"There's a more positive and optimistic attitude in England compared to a more cautious, risk-averse attitude in the other nations," Brownlee commented.

The steep drop in group bookings, which generally attract a discount, has led to a rise in average ticket prices.

There was an initial "postponement boost" to sales late in 2020 but this has all but evaporated.

If the current sales trajectory continues, panto ticket sales are projected to fall by 1.3 million and other productions' by about 557,000.