A creative district with “creative exchange, cultural collaboration and learning at its core” will be developed to link key cultural venues in the heart of the City of London. 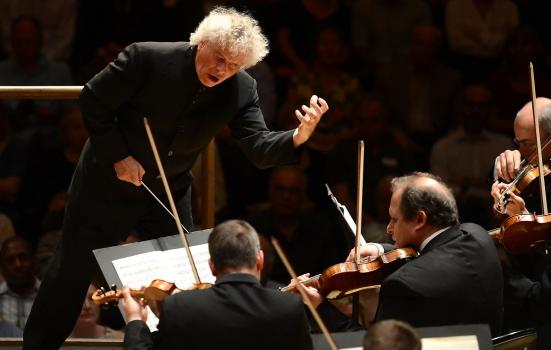 Events will include 'This is Rattle’, a ten-day festival welcoming Sir Simon Rattle to the LSO
Photo:

Plans to create a vibrant cultural area that will become a “major destination for culture and creativity” in the heart of the City of London are being backed by the City of London Corporation, together with the Barbican, the Guildhall School of Music & Drama, London Symphony Orchestra (LSO) and the Museum of London.

The ‘Culture Mile’ will stretch between Farringdon and Moorgate underground stations, and take advantage of the estimated 1.5 million extra visitors a year who will be within a 45-minute journey of the area when improvements to the rail network are completed by the end of 2019.

The initiative aims to transform the area by improving opportunities for audiences through artistic collaborations, outdoor programming and events seven days a week.

At the heart of the project are three major building projects:

Collaborative programming will be developed across partner venues. Events will include ‘This is Rattle’, a ten-day festival welcoming Sir Simon Rattle as the new Music Director of the LSO and Barbican Guildhall Artist-in-Association.

To mark the launch of the scheme, a range of temporary art installations, gardens and signage have been introduced in the area, and later this year a new public realm strategy will give more details of how the different spaces will be connected.

The Culture Mile will have “creative exchange, cultural collaboration and learning at its core”. As well as offering a wide range of cultural activity, it aims to become a “learning destination, specialising in the fusion of the creative, technical, educational and emotional skills needed for success in the 21st century”.

The Culture Mile Learning initiative is being planned in response to recent research highlighting that employers are finding it difficult to attract staff with the combination of creative and technological skills they need to support innovation. Specifically it plans to enable disadvantaged communities to access high-quality cultural experiences and develop the skills that match the workforce needs of local employers.

Catherine McGuinness, Policy Chairman at the City of London Corporation said: “We are redefining the City of London, so that the Square Mile becomes known and admired as much for being a world-class cultural destination, as for its position as a leading global financial centre.”

She added: “There is no doubt that Culture Mile will transform the area and in the face of Brexit send a signal to the world that London is – and will always be – a welcoming, open, and resolutely internationalist city.”