The Local Government Association research concludes that a shared vision is essential to realising the positive social and economic benefits that can be achieved through cultural interventions in the public realm. 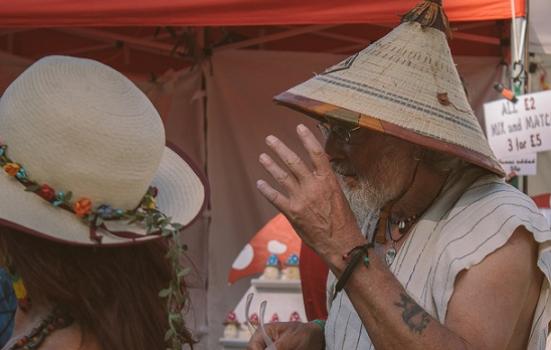 A man at Green Man Festival, which encourages attenders to stay in the local area after activities end
Photo:

Chris-Jackson on VisualHunt.com / CC BY

The support of local communities must be central to any plans to stimulate growth through culture, according to a new report examining how culture-led regeneration can achieve sustainable growth.

Published by the Local Government Association (LGA) and backed by the Calouste Gulbenkian Foundation, the report says communities have the energy necessary to see through difficult and time-consuming projects, and will reject any cultural activity considered to be inauthentic.

It highlights the importance of cultural offers being closely linked to the history and heritage of an area, and says they should create a “shared vision” which can attract the buy-in of public, private and third-sector partners.

The report, produced by the LGA’s Culture, Tourism and Sport board, is based on research carried out in 2017/18.

It focuses on the economic and social impacts of culture-led regeneration and presents case studies in urban and rural locations, and covering four areas – cultural institutions and attractions, community-focused cultural programmes, the strategic organisation and coordination of cultural activity, and recurring arts and cultural festivals.

The impact of particular forms of intervention are considered, such as creating new “anchor organisations” for cultural regeneration, festivals and pop-up activities, and long-term strategic planning and skills investment.

Examples given of the impacts of culture-led regeneration include:

The report sets out 12 lessons for structuring cultural interventions and deciding which approach is most likely to be successful.
It says that while many significant cultural regeneration projects, such as the Turner Contemporary gallery in Margate, have required long-term cultural investment, even short-term investment can support organisations to grow and access other forms of funding.

The authors remind organisations of the importance of building a strong brand, particularly in areas with historically lower engagement; of building networks in rural areas, to demonstrate the benefits of collaboration to the cultural and visitor economy; and of building cultural engagement into long-term strategy, as demonstrated in the Green Man Festival’s encouragement of attenders to stay in the local area after the festival period.

The report also encourages arts funders to ask themselves a series of key questions:

Andrew Barnett, Director of the UK branch of the Calouste Gulbenkian Foundation, praised local authorities for recognising the ability of arts and culture to generate positive change in their areas.

He expressed his hope that the report would encourage more councils to employ a culture-led approach to regeneration in their areas – which is a core of aim of his foundation’s ongoing placemaking inquiry – and lead to “more arts organisations taking their civic role seriously”.