£2.6m of additional funds will be used to re-admit five organisations into the core-funded portfolio until 2021, in a move described as a “victory for common sense”. 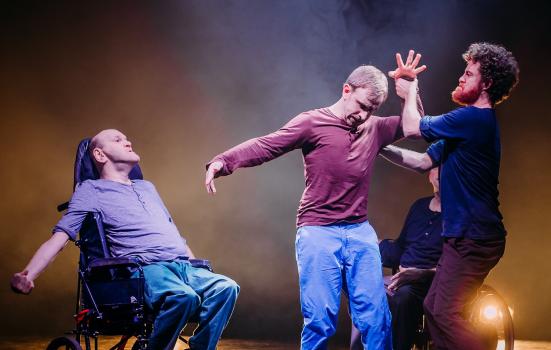 Creative Scotland has responded to ferocious criticism of its recent funding decisions by u-turning on a wave of planned core funding cuts.

Following an emergency board meeting, the national funder yesterday announced £2.6m of “additional funding” to re-admit five organisations into the network on standstill funding until 2021, and to undo a planned 22% funding cut for theatre company Stellar Quines.

Creative Scotland said the additional funds are focused on theatre for children and young people, companies led by and working with disabled people, and on excellence and experimentation.

The portfolio will increase from 116 organisations to 121 and will now include:

The decision follows a week of crisis at the national funder that has seen two board members resign, heavily subscribed public petitions calling for planned funding cuts to be overturned, criticism from Scottish Culture Secretary Fiona Hyslop, and scathing public comments on Creative Scotland’s “insensitivity”.

Lung Ha and Visible Fictions, two organisations to have their funding restored, said they were “thrilled” to hear the news.

Catherine Wheels praised the “amazing” levels of support it had received from the public.

OUR CREATIVE SCOTLAND REGULAR FUNDING HAS BEEN RESTORED!!
We cannot thank you enough for the AMAZING levels of support we have received. We’re hugely relieved for @visiblefictions @BOPTheatre @LungHasTheatre @Stellarquines & @DunedinConsort.

However, three of the touring organisations dropped from the portfolio and offered 12 months of transition funding – Fire Exit, Rapture and Mischief La Bas – have not had their funding restored. Edinburgh Festival Fringe, which had received a total of £210k from 2015-18, will also remain outside of the portfolio from 2018-21.

“We have listened to the extensive and constructive feedback we received from many individuals and organisations working across the arts and culture in Scotland,” said Ben Thomson, Interim Chair of Creative Scotland, explaining the climbdown.

“We have reviewed our budget for Regular Funding and, within the limits of the alternative funds available to us, we have been able to re-allocate £2.6m over three years, allowing us to include five further arts producing organisations in the network. We have also reaffirmed our commitment to other funding, which will include touring; equalities, diversity and inclusion; and new support for artist led work.”

“I would like to acknowledge the dedication of Creative Scotland staff throughout this process. I would also like to thank the Scottish Government for replacing funding lost to Regular Funding through falling National Lottery income enabling us to support more organisations through Regular Funding than ever before.”

Creative Scotland has confirmed the recently announced Touring Fund will continue as planned, and funding for the organisations already admitted into the portfolio will not be affected.

Commenting on the recent news, Shona McCarthy, Edinburgh Festival Fringe Chief Executive, said it was “encouraging” to see priorities of improving access and inclusion addressed in the latest funding round.

But she added questions remain “about the decision-making process, the management of communications and the negative external impact”.

“As an organisation that was recommended for Regular Funding but which was ultimately overlooked, we are seeking urgent clarification from Creative Scotland on how they came to their decisions, and how they plan to work with the Fringe Society in an open and collaborative way going forward,” she continued.

The decision follows a period of crisis at the national funder, after an open letter signed by more than 150 people called for Creative Scotland to reconsider cutting children’s theatre company Catherine Wheels. Although the organisation had been recommended for a 9% funding increase by the application assessor, it had been directed to instead apply for the new Touring Fund for support post-April 2019.

Similarly, another letter signed by a collective of disabled people from across Scotland said Creative Scotland’s initial decision to cut Birds of Paradise and Lung Ha was a “threat” to the aim of making the arts “more inclusive and representative”.

Advocacy body One in Five Scot, which co-ordinated the original letter, described the u-turn as a “victory for common sense, inclusion and Scotland’s disabled community”.

“Looking ahead, we encourage Creative Scotland to undertake disability equality training and ensure that disabled people are represented in the decision making process, including Board membership.”

Creative Scotland confirmed the Touring Fund will be open to organisations not receiving core funding from April 2019, which intends to further work by the Federation of Scottish Theatre, and to reflect recommendations in 2016’s Touring Review.

Thomson continued: “However, I also appreciate that, even now, these decisions do not address all of the issues currently being raised by individual applicants. I am sorry that, in this process, some will be disappointed by our decisions.

“Everyone at Creative Scotland is committed to working positively and collaboratively with those involved in arts and culture in Scotland, whether in the Regular Funding network or not, providing support to build on the success of a thriving sector.”

Update 07/02/18: The story was updated to include comment from Shona McCarthy, Chief Executive of the Edinburgh Festival Fringe Society.

Tuesday, 11 May 2021
A programme bringing together academics and creative businesses could act as a pilot for a national research and development (R+D) network. UKRI Challenge Director Andrew Chitty floated the idea at a... read more