Just nine regularly funded arts organisations will receive less money from Creative Scotland in 2018-21, while 27 organisations receive an uplift and 19 join the portfolio. 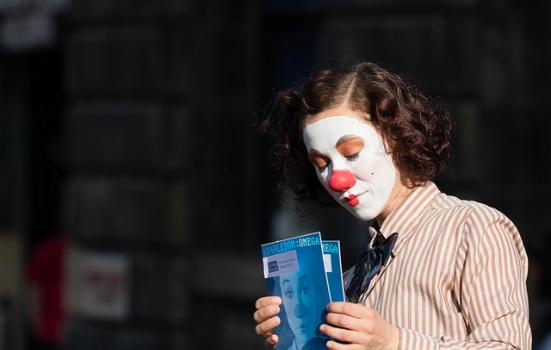 Edinburgh Festival Fringe Society has been cut from the portfolio
Photo:

Creative Scotland has made use of a surprise £7m a year funding boost to limit cuts to its roster of core-funded organisations.

Despite repeated warnings of cuts to funding and the size of the portfolio, 116 organisations will share £99m in Grant in Aid funding from 2018-21 – broadly the same as the 2015-18 portfolio. 97 previously funded organisations have successful reapplied for funding, and there are 19 new entrants.

Among those to miss out is Edinburgh Festival Fringe, which had received £210k between 2015 and 2018, and disability theatre companies Birds of Paradise and Lung Ha.

Alongside the funding announcement this week, Creative Scotland has launched a new £2m Touring Fund for 2019/20, using money from the National Lottery to “support performing arts organisations in reaching more audiences in more parts of Scotland”.

119 organisations received funding in the 2015-18 round – three more than the 2018-21 portfolio – but the national funder stressed two organisations left the portfolio during the funding period, and two previously funded organisations, Dundee Rep and Scottish Dance Theatre, put in a joint application for 2018-21.

Just nine organisations that were supported in the previous round receive a cut. The most severe is for Eden Court Theatre and Cinema, which will lose £600k over the period – a 29% cut. On the other end of the scale, the Royal Lyceum Theatre receives a £630k (21%) uplift, undoing a cut that was enforced in the previous funding round.

All of the current portfolio organisations that have not been successful for 2018-2021 will be offered transition funding at the same level for the next six months. This will be extended to 12 months for five unsuccessful touring theatre companies, taking their funding through to March 2019. They are: Fire Exit, Rapture Theatre, Catherine Wheels, Visible Fictions and Mischief La Bas.

Shona McCarthy, Chief Executive of the Edinburgh Festival Fringe Society, expressed her “extreme disappointment” at her organisation being cut from the portfolio. “As the world’s greatest platform for creative freedom, the Fringe showcases the very best of Scottish and international culture, making the arts as accessible as possible to an audience of millions,” she said.

“The Fringe generates over £170m a year for the Scottish economy but receives less than 5% of its funding from the public sector.”

She continued: “Regardless of today’s announcement we will continue to provide an unrivalled platform for creativity in Scotland, this year and for many years to come. We will continue to work with Creative Scotland to ensure that Scotland’s national agency for the arts supports and values the Fringe.”

Catherine Wheels Theatre Company, another unsuccessful applicant, said that Scotland is now “the only country in Europe without a regularly funded children’s theatre company”.

The company revealed its application was recommended for support by the Assessing Officer, but Creative Scotland ultimately decided the organisation would be a better fit for the new Touring Fund and rejected its application for regular funding.

The funding decision also sees a number of ‘Development Organisations’ receive core, three-year funding for the first time. These include organisations previously supported with annually agreed funding, such as Arts and Business Scotland and the Federation of Scottish Theatres, and new entries, including the Scottish Contemporary Art Network, Creative Edinburgh, Creative Dundee and the Scottish Music Industry Association.

One new development organisation, Creative Carbon Scotland, will work with portfolio organisations on their funding commitments to reduce carbon emissions related to at least one aspect of their activities.

The new strategic Touring Fund, also announced yesterday, will be open to organisations not receiving core funding from April 2019. This approach intends to further work by the Federation of Scottish Theatre, and to reflect recommendations in 2016’s Touring Review.

Correction 29/01/18: The article previously stated Edinburgh Festival Fringe received an annual £210k grant from Creative Scotland between 2015 and 2018. This has been corrected.