Choirs just as worthy of funding as football, report argues

Across the UK, 40,000 choirs are boosting the health and wellbeing of singers, but with funding they could do much more, according to new research. 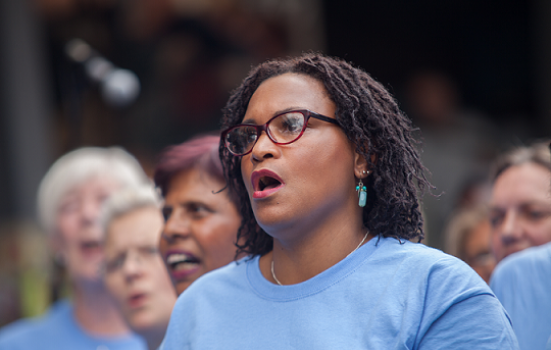 Amateur choirs deserve to receive the same levels of public support as sport, given their similar participation levels and health and wellbeing benefits, a new report has suggested.

The research concludes that choirs are diverse, well-attended and inclusive, and would be able to do “much more” for their communities if grassroots funding were increased.

“Currently choirs are self-funding and in many cases reliant on members paying some form of subscription,” the report notes.

“With more support choirs could involve more people, develop their artistic activity and contribute more to communities across the UK.”

The report makes a direct comparison between choirs and amateur sports clubs, noting that while around 300,000 more people sing in choirs than play amateur football, football receives £30m in funding every year – compared with under £500k a year for choirs.

A census for choirs

The Big Choral Census, conducted by Voices Now, sought to find out how many choirs there are in the UK, who participates in them and what sort of music they sing. It estimates there are “at least 40,000 choirs”, including private choirs, church choirs and school choirs, with 2.14 million regular singers.

The research was based on an online survey, which collected information on over 3,200 choirs, and data from Singing Network UK, UK Church Statistics and Arts Council England’s Music Education Hubs.

It found that two-thirds of choirs do not audition their members, and choirs sing a wide range of musical styles. 63% of respondents to Voices Now’s survey said they sing modern and contemporary music, 60% classical, and the range of other responses included barbershop, samba and reggae.

The survey follows several recent studies about the health and wellbeing benefits of group singing, which have been found to include improvements to the immune system, reduced loneliness and diminished stress. These benefits are increasingly being recognised by healthcare providers in the UK, including NHS Halton Clinical Commissioning Group, which has plans to put a choir in every care home in its area.

The report says: “The growing evidence that the benefits of choir participation are similar to sport, and the sheer numbers of people in the UK taking part every week, suggest that it is a worthwhile activity to receive greater financial support.”

Amateur sports clubs receive public funding to help with kits and equipment, IT equipment, coaching and officiating. The report makes the case that with more funding, choirs could benefit from:

The report concludes there is space for “every need and every style” in the UK’s choir community. The census found choirs have members of all ages, from six to 100 years old, and range in size from four to 700 participants.

In addition, it found 17% of choirs self-classified their type of singing group as ‘other’, which included choirs for “people who can’t sing” and dedicated refugee choirs.

“Choirs are already popular and are still growing, they bring innumerable benefits to communities and individuals, they are open to and cater for all,” the report adds.

“But they have the potential to do much, much more.”