British Council to use arts projects in peace-building

New research has found academic evidence of the power of culture to draw communities together. 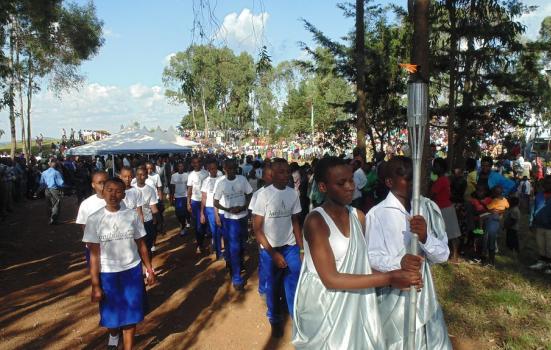 The Kwibuka Flame Tour commemorates the 1994 genocide in Rwanda
Photo:

The British Council has pledged to use arts projects to help communities across the world to heal after conflict.

In a new report, the cultural education body says that arts and cultural initiatives are well-placed to foster social cohesion, drawing on lessons from post-conflict culture intervention in areas such as Rwanda and Colombia.

The organisation also says it will commission more research into the role of culture in inclusive development, to increase the ability of the UK and other nations to “harness the arts to benefit global security and stability”.

The Art of Peace report, based on an evidence review and country case studies by the University of West Scotland, assesses the value of culture in post-conflict recovery.

Author Alison Baily notes that cultural practices have been used to help young people in areas of Colombia affected by violence to come to terms with the past and gain practical skills for the future. And she points out that Rwanda has spent three months every year since the 1994 in an act of commemoration, with many practices based around the arts, shared cultural heritage and identity.

The research identifies two key strengths of culture: engaging communities in their own cultural language, and setting the scene for understanding to be developed.

“Arts and culture are regarded as offering a more neutral ground for mutual understanding than explicit peacebuilding activities, because they are able to bring people from different groups together around a shared interest and goal, rather than around issues related to the conflict,” the British Council says.

The report says projects can have success when they are locally led, based on an understanding of local cultural traditions, and linked to wider reconciliation and recovery programmes.

But it cautions that the arts are not a panacea, and in some instances can even exacerbate conflict: popular music, for example, was used on Rwandan radio broadcasts to promote ethnic violence.

The document also warns against setting unrealistic expectations, explaining that the often small-scale nature of work in post-conflict areas can mean the evidence base is limited, and that evaluating impact can also be challenging.

The British Council is encouraged to commission more research into the role of culture to promote inclusive development and resilience in conflict-affected areas, and to use cultural interventions to focus on tangible goals such “confidence building, skills training, self-expression, intergroup understanding and tolerance”.

The British Council has agreed to the recommendations, and pledges to encourage NGOs to test “innovative and creative approaches” in partnership with each other and governments, and to ensure programmes are implemented in a conflict-sensitive manner.