As cultural organisations post positive messages of support for the Black community on social media, Twitter has been alive with comments accusing them of “virtue signalling” while failing to address their own racism. 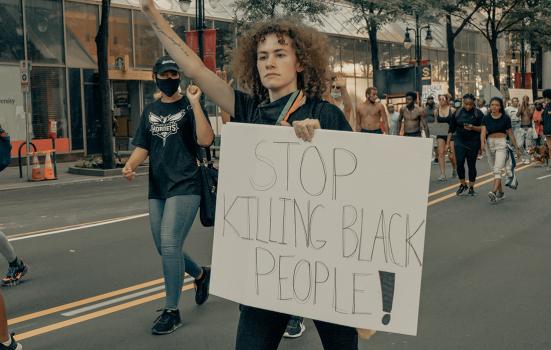 A show of solidarity with Black communities has seen artists and arts organisations across the UK join with the American music business to acknowledge #TheShowMustBePaused, a day of reflection on the racism and inequalities facing those from BAME backgrounds. TV channels and radio stations changed their programmes to mark “Blackout Tuesday”, high-profile musicians took to Twitter to share their support, and institutions around the world posted black squares on social media and ceased their online activity for a day in solidarity.

The initiative was started by two Black record executives from Atlantic Records, who called for artists and record labels to stop all their activities on Tuesday 2nd June, to “disconnect from work and reconnect with our community… in response to the murders of George Floyd, Breonna Taylor, Ahmaud Arbery and countless other Black citizens at the hands of the police.”

In the UK, the Musicians’ Union was one of many who joined #TheShowMustBePaused, “to stand in solidarity with Black communities and be part of an action that we hope affects real change and starts an honest conversation about racism and its deadly consequences.” It ceased all events, responding to emails, and posting on social media for 24 hours.

The Union posted a statement saying: “The MU stands with our Black members and all Black communities against all forms of racism, violence and discrimination. When we say ‘behind every musician’, we mean it.” It has made a commitment to “educating ourselves on how to be better allies”. As have others, it has provided a list of resources for white people and parents to deepen their anti-racism work, and is also preparing to publish a response from its own staff on our anti-racism learnings. Black members are being encouraged to join its Black Members’ Network for regular opportunities to get involved, have your say on what we do, contribute to consultation responses, and “help make policy that reflects the truth”.

But elsewhere in the sector, voices are being raised against the insincerity of some organisations, who are seen to be “virtue signalling” while failing to address their own racism.

In the performing arts, some theatres and producers are being accused of issuing statements that don’t reflect their ethos. One artist said on Twitter: “I know so many black artists who have been treated appallingly but were scared of speaking out in case they were blacklisted in an already underrepresented and closed-door industry.

“It's not always overt but microaggressions are just as painful. It shouldn't take a Black man being murdered for you to change policies and check in on the mental/physical health of Black artists. We're scared because we know that many of us will be penalised for speaking out.”

Actors’ union Equity, which has recently taken steps to improve its response to racism, is one of the organisations that have been called out. Its statement says: “We stand with our sisters and brothers in the US, UK and throughout the world who are speaking out against inequality, injustice and racism following the murder of George Floyd.” But Equity has been taken to task on Twitter for ignoring the views of its BAME members: “This is a completely empty statement considering you silenced your own Race Equality Committee and threw them under a bus when they took a stand against a racist.”

Theatre venues too have been in the firing line for their words of support, whose sincerity has been questioned. Almeida Theatre said: “We stand in solidarity with the Black activists and protestors who are fighting against injustice”, and shared speeches from Black political activists, filmed as part of our Figures of Speech project. One actor replied: “This statement feels vacuous… I for one have never felt – as an actor in your venue – visible, prioritised, reflected, welcomed, interested, supported, entertained, relevant, relaxed or a part of a community.”

The Yard Theatre said: “Over the coming days we are going to amplify and share resources for education and fundraising around anti-racism and the Black Lives Matter movement. We can all make a difference, and we must all be the difference.” But their words were condemned by one on Twitter as “wholly laughable. I and many others have had a horrific time working here. I distinctly remember trying to have this conversation and being silenced. REPEATEDLY. Whilst making a show all about racism.”

The accusations aren’t limited to any art form or type of institution and those being held to account on Twitter include drama schools and educational establishments, theatre production companies and visual arts organisations.

In response to Sonia Friedman Productions’ tweets saying “there are ways we can all take action”, one person responded “My eyes are rolling… Just rename Dream Girls ‘White People’s Playground’. Name the people of colour OFF the stage please…” and another commented, “If this is true you can start by apologising to those of us you and your team have treated like shit over the years.”

A number of the comments reflect AP’s own survey on Freedom of Expression, which found that people working in the arts often fail to call out racism for fear of losing their livelihoods. One person commented on Twitter: “Cultural institutions need to do better and stop virtue signalling - @southbankcentre the racism I saw internally whilst employed by you made me sick and I’m embarrassed I didn’t speak out about this earlier out of fear of losing my job.”

White artists have been commenting on their own culpability. Backing calls for the Almeida to respond to criticisms against it, a writer said: “when we see our Black colleagues calling institutions out, us white people should join them. Stop worrying about your career… Theatre’s full of silent people benefitting from discrimination against others.”

Many voices are demanding responses and action. One person said: “Theatre people, if you are still working with all white teams, ask yourself why. I promised myself 2 years ago that I will never again work on a project which only includes white faces, this it not 'box ticking' this is part of my practice.”

Another tweeted: “Theatres being called out for their hypocrisy in posting about Black Lives Matter but not having the receipts for employing or treating black practitioners well need to speak up and address these concerns. Do it with honesty and transparency and start the change we need to see in the industry.”

Museum Detox, the network for museum and heritage workers who identify as of colour, asked organisations to put out a statement of solidarity with the Black community. Some did, including the National Lottery Heritage Fund, Pitt Rivers museum and the Natural History Museum, which tweeted: “Many museum collections, including our own, are rooted in colonialism and racism. Today, we need to be accessible to all, as the hallmarks of this legacy linger on. It is essential we engage with these issues in order to move forward.”

But others who joined in have also faced accusations of hypocrisy. Tate tweeted “We have a platform, a voice, and a duty to our Black members, employees, artists, visitors and followers to speak up and stand for human rights and anti-racism. Nobody should have to live in fear because of the colour of their skin.” Some responses to this referred to ongoing controversy over the organisation’s links with Anthony D’Offay, including “Explain to me your duty when you have continued to ignore Anthony d’Offay’s abuse?”

Manchester Museum paused its social media content “to help spread the message of #anti-racism”, saying “When we return we will be amplifying messages in support of the #BlackLivesMatter movement. We know that we must do more, and we will continue to raise the voice of those fighting to support the cause”. But one person tweeted in response: “Did you give a shit about antisemitism? Must have blinked and missed that?”.

Museum Detox is calling on museums, galleries and heritage sites to “reset and renew”, saying “As you look at planning on reopening your doors, what can you change to ensure your organisation supports the Black community.” They pose a series of questions for which organisations need answers, including ‘What training do you provide staff around microagressions and unconscious bias?’; ‘what training do you provide Black employees so they can fast track through the hierarchy?’; and ‘have you amplified Black voices through your platform.’