Arts remain at 'epicentre of the crisis' a year after lockdown

Freelancers, young people, women and live performance art forms have been disprortionately affected by a year of lockdowns. Extended financial support may not be enough. 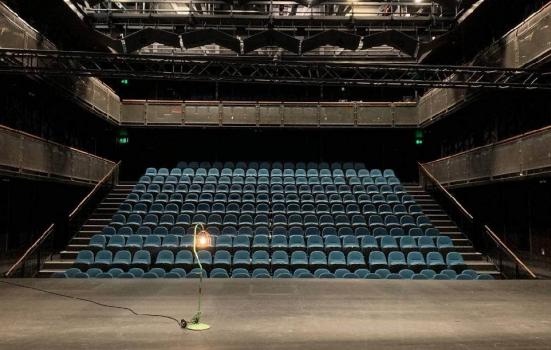 Two thirds of theatres expect to make a loss this year, a survey suggests
Photo:

A year after the first lockdown, the arts are hurting badly - worse than most other sectors. About 38,000 creative freelancers are out of work, 95% of theatres say they are worse off and £2bn of financial aid won't be enough to save the cultural sector from the impact of Covid-19.

Optimism is springing from a dim, data-dependent light at the end of the tunnel, with Boris Johnson saying England is still on track for a partial reopening of cultural venues on 17 May.

Up to 83% of theatre businesses plan to restart trading from 21 June, according to a survey by UK Theatre and the Society of London Theatre (SOLT). Organisations across the country are beginning to announce their reopening plans, from big names like the Barbican and Royal Opera House to smaller venues like Brixton Courtyard, Hampstead Theatre and Playbox Theatre, Warwick, as well as Brighton Festival.

The optimism has spread to Scotland, where V&A Dundee has announced a 1 May reopening against an indicative 17 May date for small indoor events, though no reopening date has been set for theatres or venues in Wales.

But a new report from the Centre for Cultural Value cautions that music, performing and visual arts freelancers in particular remain "at the epicentre of the crisis" and in continued decline.

It says that it's not clear whether extended support for freelancers in the recent Budget will be enough, "particularly for those occupations... that face uncertainty over the timing and extent of reopening".

Alongside the 55,000 arts workers already out of a job by December, the number of freelancers working in creative occupations has fallen by 38,000 since the start of 2020.

Data from the Office of National Statistics shows a growth trajectory in freelancing since 2018 has reversed into a "severe decline", according to the Centre for Cultural Value's analysis.

While film and television appear to be on the path towards recovery, the crisis continues for workers in live and visual arts.

"Music, performing, and the visual arts are at the epicentre of the crisis for freelancers, with a trend of decline continuing throughout 2020 that was not at all ameliorated by the brief reopening seen in summer."

The suffering is not equally spread: women and younger workers, a quarter of whom have left the sector since lockdown, have experienced job losses and reduced working hours at a higher rate than their older and male colleagues.

About 10,000 freelancers aged 25 to 29 have left the industry, an indication that "younger freelance creatives have not been protected by the current range of government and sector interventions," researchers said.

The 40 to 49 cohort has also fallen sharply from about 50,000 workers to 38,000. There was a "less marked" impact on freelancers over 50, whose employment rates bounced back by the end of last year.

The centre's research showed women too have been disproportionately affected. Female freelancers took a hit earlier in 2020 while their male counterparts were affected later in the year.

"The end of the year shows the possible emergence of a gender gap in the recovery for freelancers, mirroring creative economy trends seen after the 2008 recession."

One in four theatre freelancers are out of business, SOLT and UK Theatre report.

Organisations have stepped in to support freelancers who aren't receiving direct financial aid. Watford Palace Theatre has given £95,000 of Culture Recovery Fund money to freelancers, while furloughing full time and casual staff to keep the business intact.

Camden People's Theatre has paid artists £75,000 in commissions and cash support and is applying for further funding for freelancers. It has also acted as a food distribution hub during the pandemic, despite losing 96% of its income.

"I think we’re only just beginning to appreciate the highs and lows that we’ve all needed to navigate this year," Executive Director Kaya Stanley-Money said.

The scale of losses for theatres alone is immense, the UK Theatre and SOLT survey shows, with 95% saying they are worse off due to Covid-19. Two thirds expect to operate at a loss this year. Among the 165 organisations that provided figures, the total loss to date was almost £200m.

About a third of the theatre venues responding said they plan to create an outdoor performance space and nearly half are developing digital products to generate revenue.