Another £300m for the Culture Recovery Fund, a wider safety net for the self-employed, and continued VAT and business rates cuts extend financial supports beyond the anticipated reopening dates. 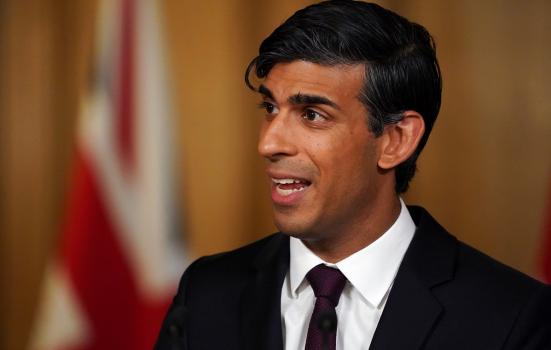 Sunak says support will continue beyond the country's reopening
Photo:

New measures announced by Chancellor Rishi Sunak in Wednesday's Budget have "hit the right note", according to the ISM and other professional organisations.

An extra £300m for the Culture Recovery Fund, £90m for museums and a further £18m for a small handful of regional cultural infrastructure projects have won a warm welcome from the arts and cultural sector.

Culture Secretary Oliver Dowden confirmed the extra £408m for culture ahead of the Budget announcement: "It's a relief we can look ahead now, so this funding is not just about survival but planning and preparing for the reopening of theatres, galleries and gigs."

Most of the financial support in fact extends beyond the Government's aspirational full reopening date of June 21.

Furlough will continue until September, although employers must contribute 10% of the cost to taxpayers in July and 20% in August in September.

A fourth Self-Employment Income Support Scheme (SEISS) grant will pay 80% of freelancers' average profits between February and April, while a "fifth and final grant" will cover the three months' from May, Sunak said.

"As the economy reopens over the summer, it is fair to target our support to those most affected by the pandemic," Sunak said.

However, the SEISS will be extended to the newly self-employed, covering about 600,000 freelancers who were previously unable to present a 2019/20 tax return.

Bectu and its parent union Prospect warned that last year's attempt to taper income supports too early resulted in thousands of redundancies.

Bectu Head Philippa Childs welcomed the changes to SEISS but implored Sunak to "look again at the remaining huge gaps in the scheme".

"The arts won’t reopen overnight so, while it is welcome that the government has listened to union calls to extend the furlough scheme, the door must be left open for further extensions for particularly hard hit sectors like theatres, live events and cinemas."

Devil in the details

With many Budget announcements already released before Sunak's speech, what's not included is perhaps more illuminating.

While the safety net for self-employed workers was widened, there is still no relief for directors working through their own limited companies or those who make too much of their income through traditional employment.

The Musicians' Union called for the extra cultural recovery funding to be made available to excluded freelancers, saying up to 20% of musicians are currently lacking support.

"Whilst we are obviously pleased that venues and theatres will be recieving additional support over the next few difficult months, we find it extremely unfair that a big proportion of the workforce that make these institutions what they are continue to be excluded.

"Allowing freelancers to apply for project funding from the Culture Recovery Fund would be a good start."

Theatres Trust Director Jon Morgan asked whether additional funding for the devolved nations, which have no reopening dates, would be allocated to the arts.

UK Music and DCMS Committee Chair Julian Knight were quick to point out the "disappointing" lack of any insurance scheme for UK festivals.

And crucially, there was no mention of any change to plans for a 5% increase in council tax that could affect local authority services.

Beyond the headlines, the uplift to DCMS' budget is minimal. Outside of Covid-19 stipends, the department will recieve another £100m core funding in 2021 and 2022.

£18.8m will be invested in specific cultural infrastructure projects in Carlisle, Hartlepool, Wakefield and Yeovil.

The £4.8bn Levelling Up fund, which can in theory support cultural institutions, opens for applications today (March 3).

In good news for the arts sector, VAT cuts and business rates holidays for hospitality and leisure will continue.

Business rates won't need to be paid until the end of June, with a two-thirds discount up to £2m available to rest of the year to those that have been unable to reopen. VAT will similarly return in a staggered fashion, rising from 5% to 12.5% in September and returning to 20% in April 2022.

A new recovery loans scheme will offer businesses of all sizes between £25,000 and £10m by providing an 80% Government guarantee to lenders, Sunak announced.

A separate programme of one-off restart grants of up to £18,000 will give leisure and hospitality businesses "further certainty in order to plan ahead and safely begin trading again over the coming months," the Budget document says.

There will also be a "super deduction" on investment: companies can reduce their tax bills by 130% on the cost of investment - "the biggest tax cut in modern British history and a bold and unprecedented move," Sunak said.

However, corporation tax will increase from 19% to 25% in 2023 against the protests of MPs on both sides of the aisle. Small businesses with lower profits will keep the old rate.

Creative Industries Federation CEO Caroline Norbury welcomed the tax reliefs and said the sector would "keenly await" the eligibility criteria for the super deduction: "It is vital that investment in our world-leading creative industries is incentivised."

Sunak quoted the Office for Budget Responsibility as saying this Budget will lead to "a swifter and more sustained recovery", returning the economy to its pre-Covid level by the middle of 2022.

It also appears to follow the advice of Institute for Fiscal Studies Director Paul Johnson, who cautioned the Budget must "strike a balance between continuing support for jobs and businesses harmed by lockdowns and weaning the economy off blanket support which will impede necessary economic adjustment".

But Labour leader Keir Starmer argued Sunak's decisions to date have contributed to the country's dire economic state, saying "it's clear the Chancellor is now betting on a recovery fuelled by consumer spending".