Arts Council England’s draft 10 year strategy says “we do not consider that certain types or scales of artistic activity are inherently of higher quality or value than others”. 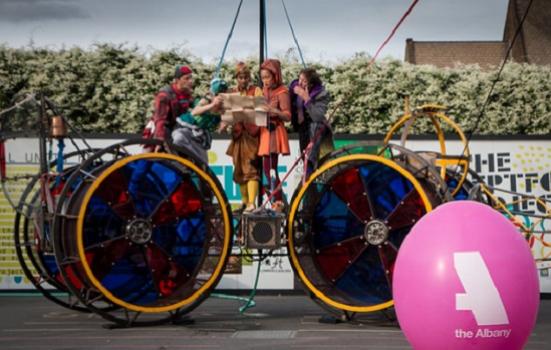 A Fun Palace in Deptford in 2014. Events like these could be made a higher priority under ACE's draft strategy.
Photo:

Inclusivity and relevance are given equal prominence alongside ambition and artistic quality in Arts Council England’s (ACE) proposed investment principles for the next decade.

A draft strategy published this week says the funder plans to encourage individual creativity, support local cultural activities and encourage world-leading innovation in the sector by explicitly demonstrating an “appetite for risk and tolerance for failure”.

ACE expects many of the organisations and people it funds to change by 2030, saying “some will be members of our current National Portfolio that have evolved to meet the future needs of audiences and artists. Others will be new to us”.

The funder plans to be “equally committed to backing organisations and individuals who have the potential to create excellence in everything they do and to supporting those who are already established at the top of their game”.

ACE will consult on the draft strategy between July and September through an online survey and workshops across England.

“Most of us already lead creative and cultural lives: we join book clubs, we take craft classes, we stream music,” the strategy document says.

“The task for the Arts Council is to enable more people to take advantage of more opportunities to develop and express their creativity, and to support them to engage with the widest possible range of culture.”

In a blog post, ACE’s Deputy CEO Simon Mellor says the funder wants England to be a country where everyone can access high-quality cultural experiences, as well as a place where individual creativity is nurtured.

“This means that in future we will place as much emphasis on our advocacy and development responsibilities as our role as a funding agency.”

ACE anticipates this will include lobbying the Department for Education to bolster creative skills teaching and helping arts organisations to develop better business models.

Funded organisations will be expected to demonstrate their value and responsiveness to the public, practitioners and their partners.

Among the proposed means of assessing this is a new inclusivity and diversity framework to help set “ambitious targets” for cultural organisations – and hold them accountable if they aren’t met.

The draft strategy says the framework would consider organisations’ offerings as well as their governance, leadership, workforce and audiences. But ACE was unable to say how it would support organisations to meet these targets, or whether failure would affect their funding.

This is intended to address a persistent lack of diversity in cultural organisations and industries, and “widespread socio-economic and geographic variances in levels of engagement with publicly funded culture”.

“We want all the organisations we invest in to be valued for the way they reflect and collaborate with their communities, as well as for the quality and ambition of their work.”

The draft strategy says that while most people have active cultural lives and enjoy opportunities to express their creativity, many feel excluded from what is labelled ‘the arts’.

It stresses that “we do not consider that certain types or scales of artistic activity are inherently of higher quality or value than others; excellence can just as readily be found in a village hall as a concert hall – in both the process of participation and in the work that is produced”.

Organisations receiving funding will have to deliver “the best possible value to the public”, the draft strategy says.

While “judgements about quality are inevitably subjective”, ACE says it wants the public’s view, peer evaluation and self-evaluation to influence how value is understood.

When asked how a requirement to demonstrate value might work, the Arts Council did not elaborate. The strategy document only represented “our current thinking”, said a spokesperson.

“The purpose of the consultation is to ask our staff, the sector and the public to share their responses to it and explore how best to deliver it – including the support they think will be needed.”

Stella Duffy of the Fun Palaces campaign for community culture said the draft strategy has great potential to extend arts and cultural opportunities to thousands of people who otherwise wouldn’t engage with them. 450,000 people have participated in Fun Palaces since 2013.

The priority for funding arts and culture should be whatever “offers the most for the most people”, said Duffy.

She argued that many of the priorities in the document had long been part of the Arts Council’s agenda, but were now being expressed “upfront”.

“I think the Arts Council is just being more specific in asking us to do what grassroots organisations have been doing for quite some time”.

But she thought organisations that opposed having investment priorities tied to inclusivity and public value might find it “scary that they’re being asked to do a bit more”.

She believed organisations should be able to create their own definition of excellence, but noted it was not yet clear how ACE’s strategy will play out, saying “the last strategy has changed over time”.

ACE says it will impose the same standards it seeks from its beneficiaries on itself. Reporting on inclusivity and diversity targets, a simpler investment process, reduced environmental impact and research into what the public and stakeholders want are among the commitments the funder makes in the draft strategy.

“We too will need to become more inclusive, ambitious, relevant, dynamic and environmentally sustainable and demonstrate best practice in all these areas,” it says.

When setting its funding priorities, ACE says it will ask itself “if our investment is truly needed, whether the activity or service would happen without our support, and whether our funding would leverage additional investment that might otherwise be lost”.

But James Doeser, a cultural researcher, was sceptical ACE’s investment priorities would truly change, regardless of what the strategy document said.

He commented: “These things reveal more about policymakers’ anxieties about their current legitimacy than they do a plan for what’s going to happen in the future.”

ArtsProfessional will be putting questions from the sector to Arts Council England about its new strategy during its consultation period. More details will be announced soon.