A British Council Wales report says that “small adjustments to the current system will not yield the necessary major changes”. 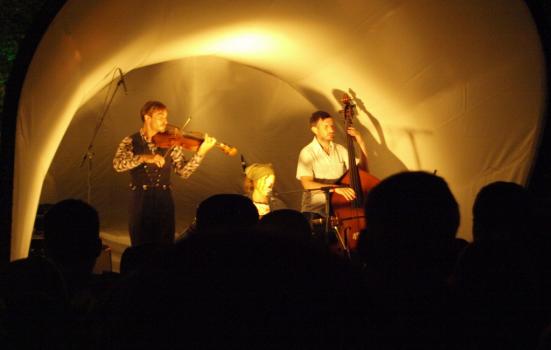 Green Man Festival is seen as a major cultural asset for Wales
Photo:

Wales has been urged to do a better job of showcasing its arts sector internationally through “new investment and a more strategic and joined-up approach”.

A report commissioned by British Council Wales found that the country’s arts offer was perceived internationally as being “too quiet – it needs to be clearer and bolder”.

It recommends counteracting this by attracting major promoters into the country through events, creating a stronger Welsh presence internationally, and developing relevant skills within the cultural sector.

It stresses that “this will require large shifts in the current way of working. Small adjustments to the current system will not yield the necessary major changes.”

It says that wooing the international arts sector could include incorporating a showcasing element into an existing event, or creating a new “annual or biennial major celebratory event that builds on an existing festival”.  The latter “would be a ‘signature’ event and would need to sustain international interest over a ten-year time frame.”

The majority of people interviewed for the report – who included local and international arts experts – suggested that building on existing successes would be a better way of showcasing Welsh arts than creating a new promotion vehicle.

“There was a universal suspicion surrounding political or public sector initiatives to showcase Wales through its arts sector, and a far greater emphasis on developing trusted and respected vehicles through which Wales’ arts and artists could be shown in a more varied context alongside work from other countries,” says the report.

While the primary motivation for better showcasing would be finding new markets, it could also provide a platform for Welsh diaspora communities and support cultural diplomacy, as well as boosting tourism and the economy.

To further these goals, the report recommends developing the Welsh presence at major sector gatherings. “Currently, artists from Wales are not visible enough at the key international events,” it says. “Welsh presence at showcasing is inconsistent, not strategic and not sustained, compared to other small nations or regions.”

The report also says that showcasing skills within the sector should be improved so that creative work can be effectively marketed and prepared for export. This would involve training artists and developing their networks, as well as setting up a mentoring scheme for sharing knowledge between intermediaries such as curators and producers.

“Wales needs to develop and nurture its curators and creative producers and network them into the global ecosystem so that they can see work, sell Wales and engage in international discussion,” says the report.

Research for the report, which included desk research, an online survey and focus groups as well as the expert interviews, found that Wales’ showcasing was being held back by “a lack of continuity and strategic framework in the approaches of international agencies” and that there is “a need for finance to be administered in a way that is longer-term, more flexible and more integrated between agencies”.

The report calls for a review of the roles and remits of international agencies working with the sector to streamline their functions and avoid “confusion and duplication”. It also recommends developing “new funding packages and long-term commitments”, specifically suggesting a “Major Cultural Events fund” supported by a number of different agencies, and another fund to support travel to showcasing events.

“Our recommendations reflect the need for a more integrated, strategic approach with interventions in all areas: policy, funding, practice and delivery,” says the report. “This has the best chance of delivering meaningful impact for the arts and cultural organisations and for Wales more generally.”

Interesting to read this while being part of an IETM Satellite meeting in Llandudno, North Wales with 60 international colleagues from all over Europe. Our starting point is “Fields of Vision: other voices, rural places, global stories” looking at models of practice within existing traditions and culture, particularly in rural contexts. There are delegates from Portugal, Poland, Hungary, Friesland, Denmark, Scotland, Brittany, Canada,Egypt amongst others, meeting artists in venues like Oriel Mostyn, through the Llawn Festival, or via trips to Bethesda, Pontio and, digitally, to Tenby for the NTW production there. A great showcase for Welsh artistic practice, and hopefully a place in which more diverse international collaborations and dialogue can happen. By contrast, at times our national identity may not be the thing that we choose to define us, and our communities of interest may be more shaped by our experiences, or our choices in how and where (and in what language) we make work.