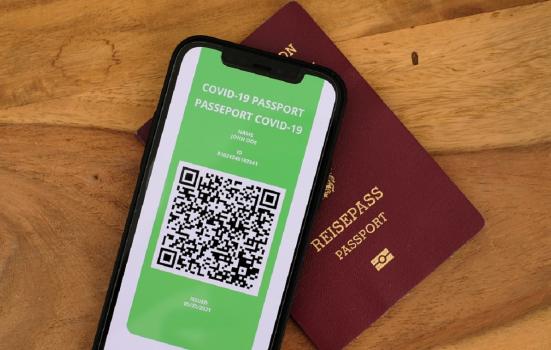 A German version of a Covid-19 certification passport
Photo:

Data from The Audience Agency (TAA) found the groups who are most likely to attend are those who would be ineligible during the early stages of a 'passport' system.

The Government will explore such a scheme through pilot events over the next six weeks, but suffered a significant setback after Liverpool's Hot Water Comedy Club, due to host the first event today (April 16), withdrew from the Events Research Programme over suggestions it would be part of a vaccine passport trial.

While the club was only ever involved in trialling an event, it says the backlash was severe - more 4,000 people complained within two days - and the Government's response delayed and confusing.

"Vaccine passports were never at any time mentioned in any of the discussions we had prior to agreeing to put on the event.

"As a consequence... we have made the decision not to be a part of any programme at all."

The club's experience highlights growing divisions over Covid status certification. While Culture Secretary Oliver Dowden has said it could help venues reopen, many fear it is damaging and discriminatory by design.

More than 480 firms in the Night Time Industries Association say it would harm their businesses, and Equity and UK disability arts alliance #WeShallNotBeRemoved have echoed lawmakers' concerns about equal rights. A test event at Sheffield's Crucible theatre has excluded under-18s, pregnant women and disabled people, the BBC reports.

TAA's research found the 20% of audiences who are unvaccinated but happy to attend venues is larger than the number who are vaccinated and would consider attending "with reservations" or when the risk of doing so was reduced (9% for each group).

"On this basis, it is hard to see how vaccine certification would increase the total numbers attending.

"This overall picture, that certification can be expected to prevent more attenders than it encourages, is only likely to change once substantially larger (and younger) proportions of the population have been vaccinated."

Other research indicates one in five audience members are uncomfortable with vaccine passports.

The Insights Alliance of Indigo, Baker Richards and One Further found just 13% of audiences consider passports essential to returning to venues, and 60% expect other safety measures to be in place regardless of testing or passports.

Masks and social distancing were more influential to audience attendance, but the biggest factor was having previously attended in a Covid-safe way. Surveys while venues were open last summer showed confidence doubled to 80% after visiting.

The alliance said there was an assumption that vaccine passports would allow venues to end social distancing: "We don't think it does at all."

"Not having it as a requirement isn’t going to stop the majority of people who want to return to venues from returning – other measures are far more important for them to see in place."

TAA too said it was "sceptical" about the potential for audiences increases in the short term.

"There could, of course, be advantages in a vaccine certification scheme in terms of reducing transmission rates from events, or in allowing events to happen at all that otherwise couldn’t. This would, though, need to be offset against disadvantages of the scheme."

Organisations are advocating for a layered approach whereby inability to produce a vaccine passport could be offset by a negative test or a recent positive test, which suggests a period of immunity.

Equity's submission to the Government on Covid-19 certification said the union has supported testing as "the fairest and most effective means of identifying risk".

#WeShallNotBeRemoved, noting that 12% of arts audiences are disabled, said in its submission that any passporting "can only work as one in a range of mitigations" and must be offered alongside social distancing, screening and testing.

Further work by the Insights Alliance shows audiences are ready to return now: 48% of frequent attenders have already booked and another 37% expect to do so by July.

Although three-quarters of respondents to the Culture Restart tracker have received at least one vaccine dose, 19% said they couldn't envisage attending events until vaccination or rapid testing was more commonplace.

TAA said that "tipping point" is likely to arrive soon. But whether it will come soon enough to make passporting beneficial to cultural organisations is unclear.

Equity commented: "Most live performance venues are expecting to be able to open towards the end of June at the earliest while all UK adults are expected to have been offered at least a first does of vaccine by July."

"This suggests that a certification scheme may not be necessary for venues."

Workforces could also be affected by the proposed scheme. Young, disabled and creative people of colour have experienced disproportionate job losses during lockdown, and Equity said certification that relies on vaccination would "run counter to the pursuit of equality in our workplaces".

"It will be crucial for the Government to ensure that employers are not able to take advantage of any certification regime in order to avoid their responsibilities under equalities law or any aspect of health and safety or employment law."

The UK Disability Arts Alliance added that integrating health data into cultural participation adds new barriers and shifts the policy framework away from the social model of disability.

Aligning entry to events or employment with Covid-19 certification may encourage a false sense of security, making these spaces more unsafe for people who are susceptible to infection, the organisation says.

"This represents a troubling and ableist precedent which potentially undermines existing protections in equality and employment law."