TEF rankings: UK arts universities are of the “highest quality”

Most of the arts-focused higher education institutions assessed by the new Government ranking scheme have received a gold award. 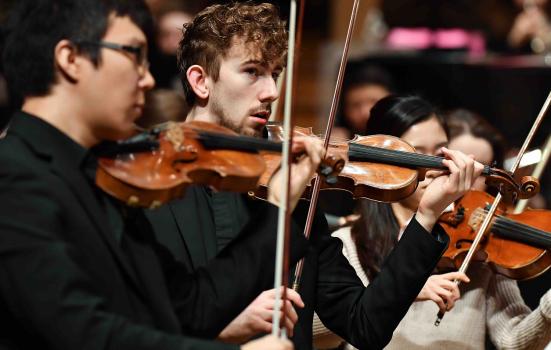 Students at the Royal Academy of Music, which has been awarded a gold rating
Photo:

Many of the UK’s arts, drama and music-focused universities and conservatoires have been recognised as being among the “highest-quality” institutions in the UK.

The Government’s new TEF (Teaching Excellence Framework) awards have ranked more than 130 participating higher education institutions as either gold, silver or bronze for the quality of teaching they provide.

The majority of arts-focused institutions that participated in the voluntary awards have received gold, which has been reserved for those “of the highest quality found in the UK”.

These include the Royal Academy of Music, where Principal Jonathan Freeman-Attwood said he was “very proud” of the award.

“It recognises our achievements in the areas that motivate us the most – encouraging progressive ways of thinking about music and performance, supporting our excellent teachers in their vital roles and most importantly, making sure that our students can create successful and happy careers when they leave,” he added.

The gold award recognises universities that deliver “consistently outstanding teaching, learning and outcomes” for their students. Other arts-focused institutions to receive gold include:

A new kind of ranking

The new awards, which have been announced following a trial year, rate universities based on six core metrics: three from the National Student Survey, relating to students’ views on the quality of teaching, assessment and academic support received; one based on universities’ dropout rates; and two relating to what graduates have done after leaving.

Conducted by the Higher Education Funding Council for England (HEFCE), they attempt to control for differences in student intake, including the demographic characteristics of students, which other university rankings ignore.

They are intended to inform prospective students about the quality of degree programmes, but may also be used by Government to determine which institutions can increase their tuition fees.

Those to receive a silver award, which recognise a “high quality” in teaching and outcomes for students, include the University of the Arts London, the Courtauld Institute of Art, Guildhall School of Music and Drama, and Leeds College of Art. Chicken Shed Theatre Trust – a designated ‘alternative provider’ – also received a silver award.

The only arts-focused institutions to receive bronze, the lowest award, which recognises institutions that simply meet the UK’s “rigorous national quality requirements”, are Goldsmiths, Plymouth College of Art and Trinity Laban Conservatoire of Music and Dance.

A spokesperson for Trinity Laban said the institution was “very disappointed” by the result, which comes a year after a HEFCE-appointed independent panel found its teaching to be “world-leading”.

“We are simply NOT a bronze institution,” they said. “Our primary objective is to help our students flourish in the profession. So, we were very pleased that HEFCE’s report began by mentioning that.”

They added: “We look forward to engaging with HEFCE to try to understand how given all of the above, we could have been placed in the bronze category.”

A number of institutions were not assessed, including Glasgow School of Art and the Royal Conservatoire of Scotland. Postgraduate universities, such as the Royal College of Art, are not currently covered by TEF.

The awards have been introduced following the increasing of student tuition fees to a maximum of £9,000 a year in 2012. A TEF submission is a requirement for universities that wish to raise their fees above this maximum in line with inflation, and the Government is considering tying increases in fees to TEF outcomes in the future.

The scheme is not without its critics, and Goldsmiths Students’ Union is among these. A post on its website, which said the bronze result was “as we predicted”, warns the scheme “does not effectively measure teaching excellence”.

The union, which earlier this year launched a boycott of the National Student Survey, argues TEF is a “one size fits all” metric that discriminates against arts and humanities institutions and disproportionately affects London universities.

However, the Warden of Goldsmiths Patrick Loughrey said the bronze award showed “we must improve in a number of areas to ensure our students have the best possible experience during their time here”.

A number of institutions that received a bronze rating, including some Russell Group universities, are appealing their awards and any resulting changes will be made in August 2017.

Update 03/07/17: This article was edited to clarify why the Royal College of Art was not assessed.