Tate Modern becomes most visited attraction in the UK

Total visits to attractions in the UK were up 8.7% on the previous year, driven in large part by regional success and the so-called “Dippy effect”. 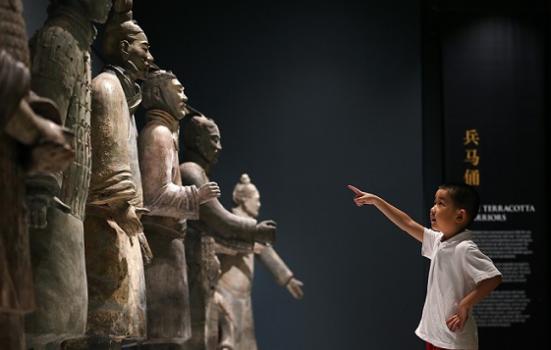 Terracotta Warriors at Liverpool's World Museum, which saw a 111% increase in visits in 2018.
Photo:

Tate Modern has knocked the British Museum off its perch to become the most-visited attraction in the UK, the latest figures from the Association of Leading Visitor Attractions (ALVA) reveal.

By contrast, 5.9m people visited Tate Modern last year – a 3.7% increase on the year before, consolidating the significant increase in visits that followed its Switch House extension opening in 2016.

Tate Modern is the first attraction in 10 years to receive more visitors than the British Museum. Analysts say continued interest in the building’s new extension, and the popularity of blockbuster exhibitions such as one on Modigliani, contributed to the Bankside gallery’s success.

“I hope Tate Modern's achievement brings confidence to museums and galleries great and small across the country,” commented Frances Morris, Director of Tate Modern. “Everything we do here is rooted in new research, artistic experimentation and with thought for local, national and international audiences.”

Maria Balshaw, Director of Tate, said it was “impressive” that Tate Modern didn’t exist 20 years ago and is now the UK’s most visited gallery.

2018 saw increased awareness of the history surrounding museum and gallery artefacts, with some institutions – including the British Museum – facing claims for objects to be returned to their places of origin.

But Bernard Donoghue, Director of ALVA, told AP he didn’t think the repatriation debate had affected attendance at the British Museum at all, and had instead “enriched the debate and awareness among people who go”.

He added that the slight fall in visitors did not amount to a “dramatic coup” and was reflective more of Tate Modern’s success in “responding well to what visitors like”. ALVA also notes that an “additional 9m UK visitors saw British Museum objects outside of London”.

Elsewhere, The National Gallery remained in 3rd place, despite increasing visitor numbers by 9.7% to 5.7m. And the Natural History Museum remained in fourth place, increasing visits by 18% to reach 5.2m, through what ALVA describes as an “innovative family marketing campaign”.

Other London venues saw significant growth, with the Southbank Centre taking advantage of the reopening of the Hayward Gallery, Queen Elizabeth Hall and Purcell Room to increase visits by 31.7% to a total of 4.5m visits. The Royal Albert Hall rose five places to 15th place with 1.8m visits, and the Royal Academy rose 12 places to 18th with 1.6m visits.

By contrast, visitors to Shakespeare’s Globe, close to Tate Modern on Bankside, were down by 12% to 819k.

A spokesperson for the theatre explained that one of its performance spaces was closed for three weeks at the start of the season. "The Globe faced challenging macro-economic factors this year, including adverse domestic and overseas tourist numbers in central London and the general uncertainty around Brexit, which affected the numbers of visitors we welcomed on Bankside,” they told AP.

Noting the venue achieved 89% capacity for performances throughout the year, the spokesperson added: “Society of London Theatre (SOLT) figures for playgoing have overall theatre attendance down by 6.5%, with the Globe audience still accounting for 11% of all play going in London."

Visitor numbers at Tate Britain were also down 27%, to 1.3m, which a spokesperson said followed a bumper year in 2017 when visits were up 64% on the year before.

Donoghue said recent inbound visitor numbers in 2018 were down on the previous year, meaning growth in visits to attractions was due to domestic tourism and “largely to places like Birmingham, Liverpool and Belfast”, leading to a “much more of an even spread” than in recent years.

He called Liverpool a “standout” example. “Due to the Terracotta Warriors exhibit at the city’s World Museum, they got 1.4m [visits] and that was a 111% increase,” he said. “There was the Museum of Liverpool; they had a 31% increase and nearly a million visits, thanks to ‘Double Fantasy - John and Yoko’. And Tate Liverpool had its most successful year since 2008, when the city was European Capital of Culture.”

Donoghue also pointed to the ‘Dippy effect’, whereby venues that hosted the touring replica diplodocus skeleton that used to stand in London’s Natural History Museum received record numbers of visitors. Birmingham Museum and Art Gallery, which hosted the skeleton between May and September, saw 250,000 visits in that period and a 38% increase in total visits for the year. The dinosaur also visited Northern Ireland’s Ulster Museum between September and early January.

The National Museum of Scotland, 11th on the list, increased visits by 3% and received 2.2m visits. Edinburgh Castle followed in 12th place with a 2% increase, reaching 2.1m visits. It also retained its position as the most visited paid-for attraction in the country.

“These figures are fantastic for our iconic tourist sites and show our high-quality attractions are continuing to appeal to visitors across the UK and the world,” commented Scotland’s Tourism Secretary, Fiona Hyslop.

“With the ongoing uncertainty of the EU Exit, the Scottish Government recognises we cannot take tourism success for granted. We will continue to work to support sustainable growth of the industry as it creates jobs, boosts the local and national economy and builds on our strong international reputation.”

Donoghue said that there is “much greater appreciation” of the economic and cultural significance of tourism, culture and heritage in Scotland and among Scottish politicians than in England, and added that the general debate about culture is “too economic-focused”.

“I’m particularly conscious that visitor numbers are just one benchmark, one barometer of popularity,” he said. “Much more important are stories of why growth is happening and where, and the stories of creative partnerships, risk-taking and new approaches to engaging with and having new conversations with new audiences.

“The numbers, if you like, are a sort of ‘Top of The Pops’. The more interesting things that flow from them are who’s doing what, why and to what end.”