Women are being penalised for part-time working in the arts and cultural sector, earning full-time equivalent salaries that fall significantly short of those paid to people working full-time. 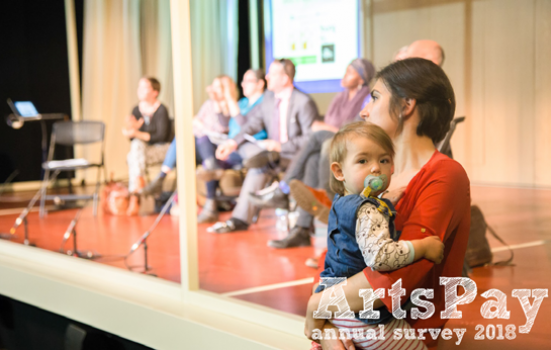 The gender pay gap in the arts and cultural sector is being compounded by pay practices around part-time work, the ArtsPay 2018 survey has found.

Part-time roles in the sector are held disproportionately by women. While 77% of respondents employed full-time in the sector were women, that figure that rose to 88% among those employed part-time. 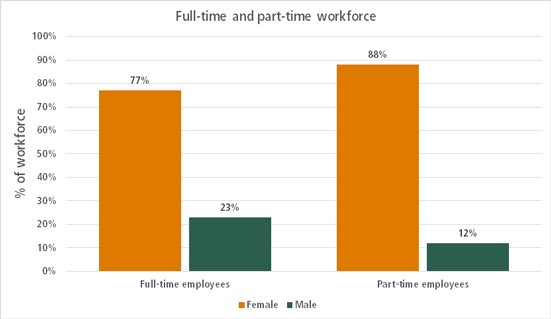 This part-time/gender pay gap grows as women’s careers progress. At senior levels the gap is by far the greatest, with men working full-time at senior levels earning 25% more than women working part-time in the same level of work. The fte average salary reported by this group was £32,000, compared with £40,000 for the men.

In mid-level roles the part-time gender penalty was £2,000, while in entry level/early career roles the gap was £1,500. 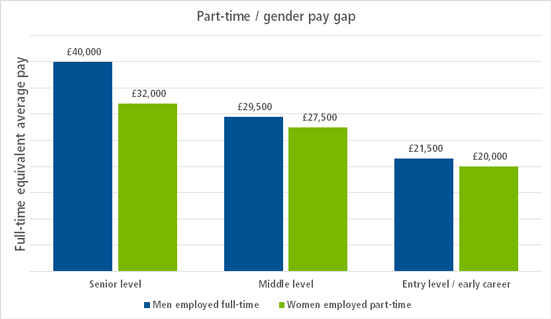 While 31% of full-time senior positions were held by men, this figure falls to 20% for part-time senior roles.

The existence of pay differentials between part-time and full-time employees was raised in several comments in the survey. One respondent said: “While I am lucky to be able to work flexibly and part-time at my organisation, I can't help but feel a bit exploited or undervalued when I see that equivalent roles at other national [organisations] are paid about £4–5k more than mine per year. I don't understand how management can justify this disparity.”

Several respondents commented on the impact of career breaks on earnings. “After a fifteen-year gap, working part-time on freelance contracts whilst bringing up a family I find I am earning almost exactly the same figure pro rata in my permanent part-time role”, said one. “There is no obvious career ladder I see, just a series of sideways moves to be made, some of which are better remunerated than others.”

Caring responsibilities were highlighted as damaging to earning potential. Another respondent said: “I know talented women doing part-time jobs for various family/personal reasons that young single people could simply not afford to take – and they can survive at this low wage level (£12,000 - £14,000 per annum) because they have a partner in a well-paid job.”

Working full-time hours but being paid part-time wages appears to be commonplace. One said: “Due to lack of funds I was employed part-time but due to my own desires to make the place successful and due to pressure for there to be a certain level of programming, I worked full-time for part-time wages. I had enormous responsibility for a so-called part-time worker and very little support.”

Respondents described many of the challenges facing part-time employees. Working for more than one organisation was among them: “I'm absolutely exhausted from working two middle management part-time jobs in two very different arts organisations in two different cities. But there just aren't enough full-time opportunities. Burnout is real,” said one.

Some respondents who lead organisations commented that financial constraints leave them no choice but to appoint part-time roles. The Executive Director of an internationally renowned music organisation said: “I worry about recruiting staff, when all the jobs are part-time (2 or 3 days a week) and the salaries are generally low (between £22–£32k). But it's the only way that we can exist as an organisation.”

Another commented: “I would say generally that visual arts organisations do not have enough money to pay decent wages/fees to their part-time staff/consultants particularly. This has led to a culture of self-employed but 'permanent' staff without any rights or proper employment rights.”

These issues are familiar to the Parents in Performing Arts Campaign (PiPA), whose own research has found that part-time work is commonly seen as a form of demotion, often accompanied by a reduction in responsibility and low pay. PiPA Co-founder Cassie Raine told AP: “Part-time work and other forms of flexible working are crucial in order to ensure that those with caring responsibilities are able to continue and develop their careers.”

PiPA’s recent survey, Balancing Act, also found that those with caring responsibilities are more likely to work part-time (especially women) and that parents and carers experience a significant pay penalty (£3,000p.a. less).  It found that 4 out of 10 carers want to increase their working hours (by an average of two days a week) and 7 out of 10 people had to turn down work opportunities due to caring responsibilities.”

Raine continued: “Over the past couple of years there has been a seismic shift in awareness and attitudes about the way we work and an openness to try new things. There have been several examples of high-level job shares, such as Katy Griffiths and Deborah Sawyerr, who were appointed Joint Deputy Executive Directors of the Mercury Theatre, as well as many roles being advertised as open to flexible working and job shares as per the PiPA Best Practice Charter.

“The ArtsPay data provides further evidence of the need for an urgent review of traditional ways of working and a move towards more inclusive, innovative working practices."