The Government’s £15m Northern Cultural Regeneration Fund has awarded grants to three major capital projects in the North of England. 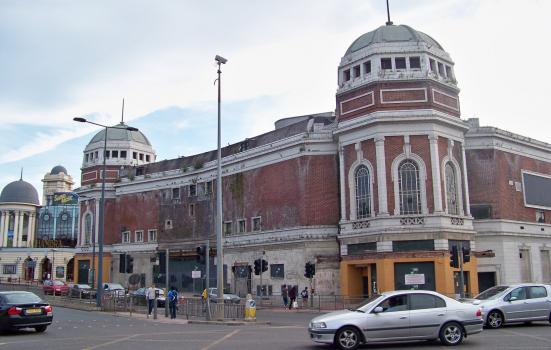 The former Bradford Odeon will be transformed into a 4,000 capacity events venue
Photo:

A new 4,000 capacity live music, entertainment and events venue will be created in Bradford following a successful bid for £4m in Government funds.

This is one of three major capital projects in the North of England to be awarded funding from the Northern Cultural Regeneration Fund, and will form part of the legacy of the Government’s Great Exhibition of the North event, which is due to take place in NewcastleGateshead this summer.

The other two successful bids will support the creation of a new museum in Blackpool and work to enhance various cultural attractions in the Lake District.

The bids were coordinated by Local Enterprise Partnerships with the purpose of encouraging regeneration in areas with historically low levels of cultural and creative investment across the North of England.

£3.7m remains in the £15m Fund and will be used to create a new funding programme for the cultural sector and creative industries in the North of England.

In Bradford, the former Odeon cinema, which has been vacant since 2000, will be transformed into a major events venue that aims to put the city back on the national touring circuit.

Bradford Live, which is leading the project with the help of Bradford Council, said it was “thrilled” to be awarded the funding.

The venue will be run by NEC Group International, which manages several arena and conference spaces in Birmingham. It will put on around 225 events for more than 270,000 people every year, creating 50 jobs in the city.

A second £4m grant will support the development of a new museum in Blackpool, which is due to open in 2020 on the town’s Golden Mile. It will celebrate Blackpool’s history as the UK’s first mass seaside holiday resort and hopes to boost tourism by attracting almost 300,000 visitors a year.

Working with partners including the V&A, EMI Group Archive Trust and the British Music Hall Society, the council-backed venue aims to be a “blend of museum and visitor attraction”, displaying artefacts, but also staging film, music and performance events.

The £13m project has also been supported by the Heritage Lottery Fund, which has awarded £400k up front to support development, with the prospect of a further £4m down the line. Councillor Gillian Campbell, Deputy Leader of Blackpool Council, said: “This is great news and we are delighted to have secured such significant funding. This is a major step forward to help deliver this exciting project.”

In the Lake District, a £3.3m grant will support regeneration projects at Windermere Jetty, Dove Cottage, the Wordsworth Museum, and Abbot Hall Art Gallery and Museum. These will increase accessibility and improve exhibition spaces, with the aim of attracting nearly 150,000 additional visitors.

Announcing the awards, Michael Ellis, Minister for Arts, Heritage and Tourism, said: “These exciting projects will provide a true cultural legacy for people across the North that increases tourism, boosts local economies and creates jobs for the future. They reflect the diversity and unique identity of Blackpool, Bradford and the Lake District and will enable them to realise their exciting cultural ambitions.”

The £15m Northern Cultural Regeneration Fund was launched by former Culture Secretary Karen Bradley last year to boost the Northern Powerhouse and help build a legacy for the Great Exhibition of the North. Eleven towns and cities bid for a share of the fund and £11.3m has been awarded so far.

Details of a new fund for the cultural sector and creative industries in the North of England, which will put to use the remaining £3.7m, are due to be announced this summer.