Formal education is missing an opportunity to support young people's development by failing to recognise the forms of music those receiving free school meals often engage with. 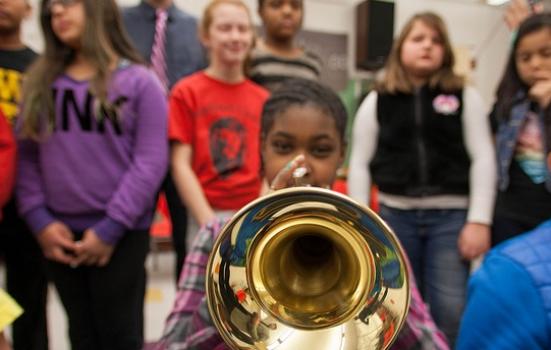 Phil Roeder on VisualHunt / CC BY

A new report calls for music education to be “reshaped and democratised” to better reflect the interests and activities of young people and make sure those from less privileged backgrounds do not miss out on opportunities.

Research into the views and experiences of young people aged between seven and 17, commissioned by the charity Youth Music, finds that young people are more likely than they were a decade ago to see themselves as musical and participate in musical activity.

The report says the rise in playing instruments is partly down to government supporting this through group lessons, but adds that another important factor is the increased availability of YouTube tutorials.

There has also been a growth in the proportion of young people making electronic music, with the percentage making music on a computer or other device growing from 4% to 11% since 2006. This activity was particularly popular among young men aged 16 to 17, almost one in five of whom (19%) reported creating music in this way.

Young people receiving free school meals were more likely to see themselves as musical, with 76% in this group describing themselves in this way, compared to 60% of respondents not in the demographic.

“Many young people with limited financial means are experiencing a rich musical childhood,” says the report, “it just looks different to that of their more affluent peers. It’s more likely to emanate from their home, have a DIY feel to it and less likely to be taught in a formal way. Often it’s ‘everyday creativity’ – activity which is already happening in people’s lives, an accessible form of culture that they can engage in.”

Among the technologies supporting the growth of new ways of engaging with music, the report names the app TikTok, which enables users to upload lip-synched videos to social media channels, and open source software that allows ‘bedroom musicians’ to create tracks using professional-level functionality.

But the report notes that such forms of music are often not recognised in formal education, leading to barriers in participation as age increases, with a knock-on effect in the make-up of the music industry.

“Bedroom musicianship and karaoke-style apps are part of a suite of activities that develop young people’s musical identity but often go unrecognised in formal music education, says the report. “This is a missed opportunity to engage young people and support them in their musical development.”

“If young people don’t have access to professional guidance, they’re less likely to have support to progress to more advanced levels of technical competence, to learn from expert role models, to understand the career paths available to them, and to be aware of key legal issues and risks in the music industry.

“Music education needs to be reshaped and democratised for an evolving landscape – and it needs to start from young people’s existing creative identities and to nurture talent from diverse backgrounds. Not only will this result in higher engagement, but it will also serve to level the playing field, meaning those from less privileged backgrounds are less likely to miss out.”

The report also points to a disconnect between music education and the music industry, meaning that “young people often aren’t aware of the opportunities available, or the paths they need to follow to pursue a musical career”.

“This is limiting the size of the talent pool and may be hampering the country’s future competitiveness,” say the authors. “There is a real opportunity for the industry and education sectors to join up to provide more inclusive pathways to success, both for artists and those working behind the scenes.”

The report argues that music education should be “re-imagined” under a new model “that’s more aligned with young people’s existing musical identities and with outcomes that go beyond attainment to better capitalise on music’s social value.”

It argues for more industry-facing curriculums and partnerships, and better consideration of the needs of DIY musicians.

“Digital technologies should be embedded, and programmes should prepare young people for a wide variety of industry roles including what’s required to have a successful freelance career,” add the authors.

Youth Music calls for policymakers to encourage music and creative industry opportunities outside London and direct music education funds towards people with the greatest barriers to access. It also urges the music industry to commit to paying a real Living Wage and follow the Internship Code of Practice, which states that interns should be paid at least the national minimum wage.

The report also argues that those responsible for young people’s wellbeing should give greater consideration to the role that music can play, and embed people’s interest in music into strategies to support mental health. In the survey, 85% of respondents said music made them feel happy, 41% said it made them feel cool, and 39% that it made them excited.

“The experiences of young people included in our study align with the wider evidence – that listening to and playing music is a vital way of regulating and articulating emotions, developing social bonds and feeling more in control of life,” says the report.

“Young people are using music as a resource to draw on, a coping mechanism to support their personal wellbeing. They’re doing this creatively, strategically and – often – independently. There’s an opportunity therefore for schools, charities and arts organisations to support young people to use music in this way.”