Glasgow Life says it's unrealistic to expect it can reopen 80 of its venues, including several libraries and the UK's only museum of religious art. 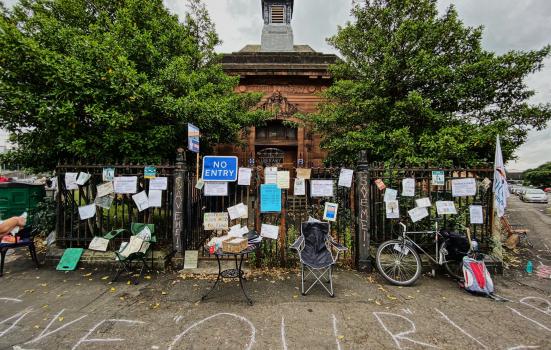 Campaigners aim to save local libraries and museums from closure
Photo:

Glasgow is set to lose 500 cultural and leisure jobs over the next five years.

The charity says it's "unrealistic to expect" it can open 80 of its 171 sites. Five libraries, three museums, 17 community centres and 37 sports and leisure facilities remain closed at this stage.

However, options for community groups to take over the buildings will be explored through a council initiative established in February. So far, 250 enquiries have been received.

But the cuts, which could affect cultural provision in the city for years to come, have parked debate among Glasgow's politicians, and protests and petitioning from those connected to the sites facing closure.

The National Campaign for the Arts says it is "shocked" by the closures, and the Scottish Fabians Society said Glasgow Life is central to the city's recovery from Covid-19.

"Staff and communities alike are being left in the dark, and there is a real danger of these vital services being lost forever," Scottish Fabians National Manager Katherine Sangster commented.

Redundancies will be made through early retirement and voluntary departures, Glasgow Life says.

"This cost saving strategy is a vital part of the process of recovery Glasgow Life has been forced to undertake by the global pandemic.

"Glasgow Life will be a very different organisation at the end of this period."

Glasgow City Council decided in May that all Glasgow Life venues should reopen as soon as funding and Scottish Government guidance allows.

But the loss of income last year - a third of the charity's takings in 2019 - has placed it in a difficult position.

Analysis by Herald Scotland found Glasgow Life had earned more than half a billion pounds since its creation in 2007 and saved the city council £170m in VAT.

Attendance at its venues had grown by 30% to more than 18 million as its core funding from council fell by 10%.

"Before the pandemic, Glasgow Life had a proven track record of delivering more with less," its Chief Executive Dr Bridget McConnell said.

Among the sites not expected to reopen is St Mungo's Museum, the UK's only museum of religious art.

Petitioners held a meeting on Thursday (July 15) to assert the venue's value. The museum is a model for similar institutions internationally and has long fulfilled its mission to promote good relations and challenge discrimination and racism, Interfaith Glasgow says.

Glasgow Life says it is in discussions with a third party to operate the site.

Attempts are also under way to save the Couper Library, with 'read ins' every Saturday. Keeping it open would cost £400,000, the space is difficult for social distancing, and significant refurbishment is needed.

Campaigners say the 1924 building is an important resource the community cannot afford to lose.

"The Couper was under threat in the 1990s and the community came together to fight the closure - we need that same solidarity again."

Local politicians have called on the Scottish Government to provide extra funding.

Glasgow City Council has guaranteed £100m to Glasgow Life over the next five years but the organisation says its ability to reopen more venues "is entirely dependent on more funding becoming available".

Conservative and Labour councillors criticised their SNP colleagues for failing to protect Glasgow Life from redundancies; the council fired back that Tory proposals would have cut almost £5m from the charity's budget.

"We also must demand why the city’s SNP politicians aren’t knocking on the door of their SNP colleagues in Holyrood demanding the support our city needs?"

Sangster, of the Scottish Fabians, said the crisis facing Glasgow Life is the "direct result" of successive funding cuts by the SNP over recent years.

"It is not credible to blame these [job] cuts solely on a loss of revenue due to Covid-19 restrictions given the years of budget cuts Glasgow has suffered."