British MEP Julie Ward will be the first participant in a scheme that will see politicians help organise exhibitions and sell tickets. 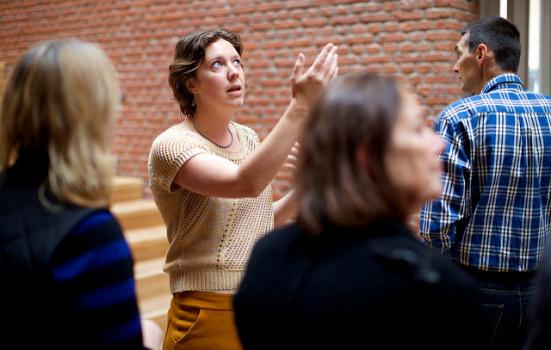 A tour around the Bonnefanten Museum, where British MEP Julie Ward will be interning
Photo:

European politicians are set to become interns in museums across the continent as part of a new initiative to teach them about the challenges of working in an arts institution.

They may be asked to sell tickets, help organise an exhibition or give a guided tour to schoolchildren, and will learn from the museum’s educators and curators.

The programme is designed to run for half a day and is co-ordinated by NEMO, the Network of European Museum Organisations.

“Someone who works closely with the unions would probably do an internship in a labour museum, and someone who expresses their interest in education would be hosted by a museum with strong educational focus and programmes,” explained Julia Pagel, NEMO Secretary General.

The first ‘intern’ will be British Labour MEP and member of the European Culture and Education Committee, Julie Ward, who will be based at Bonnefantenmuseum in Maastricht in the Netherlands. The museum was chosen because Ward expressed an interest in ancient artefacts, design and community work, and because of its focus on youth, gender and sexuality.

The new scheme is based on an existing Netherlands Museum Association initiative, which has seen 22 politicians take part in a range of cultural activities over the past few years.

Speaking about her experience with the programme, Marja Ruigrok, who interned at the Amsterdam Museum in 2014 whilst a City Councillor, said: “I enjoyed it very much. Difference facets, like cultural education, the ticket office, the restoration workshop – it gives you a broad picture, and you feel the vitality of a museum.”

NEMO intends to run three or four internships a year, working with museums in all European countries.