The knowledge-sharing Small Venues Network intends to take on an additional 20 members later this year. 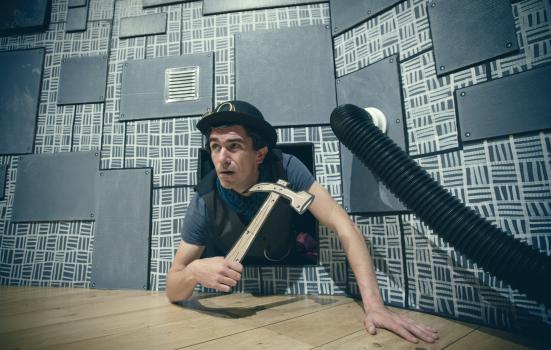 Cardboard Joe and the Book of Mysteries, commissioned by the Small Venues Network

A collaborative network between small performing arts venues in Yorkshire has helped attract work that would normally not come to the region, according to the results of a three-year research project.

The Small Venues Network (SVN) is also credited with tackling professional isolation and allowing time-stretched programmers to benefit from the expertise of more established colleagues.

SVN is planning to extend the project, and hopes to apply for additional funding to expand the current network of 12 to an additional 20 arts organisations by late spring or early summer.

“Some people working in small arts venues – if it’s just them – don’t have the time and space to establish the in-depth knowledge about what’s out there. They just have other demands on their time,” Arts & Leisure Manager at Goole Junction Charlie Studdy told AP.

“Using the network to learn from someone experienced in booking shows, who is travelling around the country to see work, can really help to expand the quality of the offer at a venue.”

Birth of the network

The network was set up five years ago to see how venues could work together to bring more quality arts into the Yorkshire region. A one-year trial led to a three-year action research project, backed by £97k from Arts Council England’s Grants for the Arts funding programme. It involved a series of quarterly meetings, a commissioned piece of work, and four tours to most of the venues in the network.

The 12 performing arts venues that make up the network currently include The Civic in Barnsley, Leeds’ Carriageworks Theatre and Pocklington Arts Centre in East Yorkshire.

Studdy told AP the trust built up via the quarterly sessions had been of “tremendous value”, allowing venues to ask questions in a safe environment.

The ability to offer a clustered series of tour dates allowed the venues to attract new and previously unreachable companies to the region, he added. Four tours were organised in this manner, and the open network reportedly led to 20 to 25 mini tours being booked.

“At least two of the venues in the network don’t normally do work for families,” Studdy added. “Participating in the network opened them up to this, via the commissioned show, which developed their audiences.”

He also said a ‘one size fits all’ approach to programming didn’t work, given the diversity of venues in the network. Instead, a programming ‘menu’ was developed, from which venues could choose shows that worked for them.

The network’s development has coincided with a raft of similar initiatives across the country. The Regional Touring Network commenced a three-year project last year, to tour high-quality drama to mid-scale venues across England, and the Coastal Culture Network recently launched online, to share knowledge and experience between cultural organisations, local authorities and other relevant parties.

Studdy said an expanded network would replicate the current structure, remaining a “network rather than an organisation”, and although a quarterly meeting was a large investment of time, it was greatly valued.

Speaking about SVN, Penny Sanders of Seven Arts in Leeds, a network member, said: “Many small venues are run by one or a few people who do everything and that can be very isolating. By getting together and sharing our ways of working, we have learned how to do things differently or better, and shared our knowledge too.”