Community-run organisations are planning “visonary and radical alternatives” as they search for a sustainable way forward amid growing gentrification. 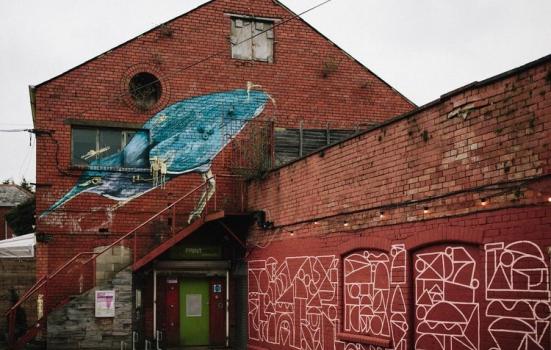 The Printhaus in Cardiff
Photo:

A campaign in Cardiff has been launched to protect community-run cultural spaces in the city, as they come under increasing pressure from property developers to relocate.

Creative Commons Cardiff, a coalition of cultural practitioners, held a public meeting earlier this month at The Sustainable Studio.

The event, which was attended by about 100 people, saw the launch of ‘Plan C’, which aims to bring individuals and groups together to find an affordable and sustainable way to support grassroots creative activity.

Both The Sustainable Studio, a creative workspace, and The Printhaus, a screenprinting workshop and studio provider, are required to move from their current locations by the end of the year.

The campaign has been initiated by these two spaces, together with Cardiff-based members of the Movement for Cultural Democracy.

Julia Harris, co-founder of The Sustainable Studio, said that the details of Plan C “will emerge as a result of a co-operative process of consultation”.

She added: “Our ambition is to develop a mutually beneficial community-powered network of cultural spaces that can operate across the city in perpetuity.

“We recognise that we need to develop visionary and radical alternatives if we are to challenge the current inequalities.”

Harris said that support for the initiative from colleagues working in the city’s cultural sector “has been overwhelming. There is a real desire to work together as we recognise this is a collective, city-wide issue.”

The Sustainable Studio’s site, which it has occupied since opening in 2016, is set to be redeveloped by real estate company Vastint, which is planning a 15 hectare mixed-use development for the area.

Other creative spaces affected by the development are the creative cooperative The Laundry and the shipping container studio development The Bone Yard.

Printhaus, which has been at its 6000 sq ft site in the Riverside area of the city for over 10 years, has to find a new home by September.

Jude Lau, co-founder of Printhaus, said: “Plan C really highlights the lack of spaces in the city. We’ve been looking for a new space for coming up to 8 months now”.

Other cultural organisations in Cardiff faced with possible relocation include the artist-run gallery and project space g39.

The venue’s current lease ends in 2021 and it has been told that the landlord is not intending to renew. “We’re planning on the assumption that we will be relocating in 2021,” Company Director Chris Brown told AP.

Among those who attended the first Plan C meeting was Sara Pepper, Director of Creative Cardiff.

Quoted on the Creative Cardiff blog, she said: “Plan C is timely as we are a young city growing and developing at a pace and it's important that we have a forum for discussion.”

The next Plan C meeting is intended as an opportunity to decide priorities for the campaign. Lau said it will be structured to allow discussion of short, medium and long-term objectives.

Harris added that Plan C was an attempt to “work together as a sector to support the wellbeing of future grassroots arts and cultural practitioners”.

She added: “We will achieve this by being innovative and canny in how we develop and manage a network of community owned and run cultural spaces.”

A second meeting of the group will take place on 7 June at The Printhaus.