Plans to restrict busking in London's West End would limit the number of street performers and criminalise shows outside of 25 designated spots. 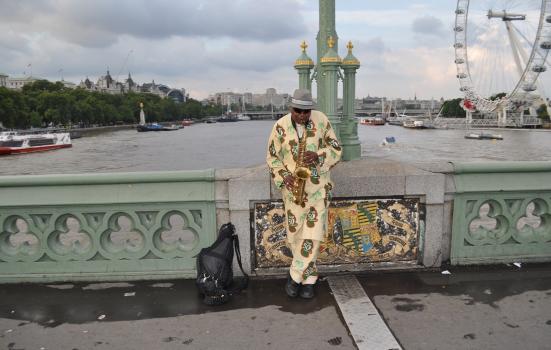 Proposals to restrict the number and nature of street perfomances around London's West End will ruin buskers' livelihoods and diminish the art form, campaigners say.

Save London Buskers, a coalition of the Musicians' Union, Equity, The Busking Project, The Magic Circle, Keep Streets Live and two London street performers' associations, say Westminister City Council (WCC) is needlessly pursuing the changes to control noisy and anti-social busking rather than using existing legislation designed to do so.

Nick Broad of The Busking Project said WCC has bizarrely chosen to limit noise and overcrowding in the middle of the pandemic, at a time of few work opportunities for performers.

"If they would only pop their heads outside for a moment, they'd see that these restrictions are extraordinarily pointless right now."

The council says it receives 1800 complaints a year related to busking - roughly five a day - and that residents and businesses are asking for tougher measures.

"We want to be clear that we are not banning street entertainment," a statement from WCC said.

"We are making proposals for pitches in an effort to strike the right balance so that people can continue to enjoy performances on our streets."

Consultation closes Sunday on plans to introduce a mandatory busking licence and limit busking to 25 'pitches' in the borough. Only one performance would be allowed on each pitch at any one time and amplifiers are allowed on just five pitches.

Licenced performers must have £2m public liability insurance, pyrotechnics, fireworks, knives and other sharp objects would be banned, and performances are not allowed after 9pm.

Anyone failing to comply could be fined, have their equipment confiscated or, in extreme cases, be arrested.

Yet the Westminster Street Performers Association (WSPA) plans to openly defy the rules if they are approved, according to representative and street art living history archivist Mathew Boden.

"We're going to fight it every way we can, be it legal challenges, continuing performances or protests. Westminster Council will have to show the brutality - the reality - of what they are doing."

Boden, a street performer for 17 years, says busking gave him refuge and purpose at a time when he was homeless.

"I went out on the street and began performing ... and my life was literally put back together from that point."

The proposed busking licences would require proof of address.

Boden said this and other changes being pursued by WCC ignore the itinerant and site-specific nature of many street performances, and will close the gate on entertainers like himself.

The WSPA has offered to police loud or problematic busking through self-regulation, ensure its members are adequately insured, and give testimony if the council decided to pursue charges against problem buskers. A similar system has been deployed at Covent Garden.

"They turned around and said, 'send us all your data and we'll think about it,'" Boden said.

WCC did not answer questions about why it has not accepted the WSPA's offer.

WCC says it has developed the proposals "after extensive engagement with key groups including residents, businesses and the busking community".

Jim Woodcock of the Covent Garden Street Performers Association said the group was only told in September that Covent Garden would be included in a list of restricted areas.

He said WCC "does not value or understand street art", citing efforts like Operation Spotlight, a 2014 initiative funded by the Heart of London Business Alliance that equated busking with begging.

The result of the effort to reduce noise was a crackdown on buskers. Boden recalled a round up of perfomers - even the silent human statues - in Trafalgar Square.

"They don't want to deal with complaints on a one-on-one basis," he said of WCC.

"They would rather, and they have been trying since 2011, to have a licence to come and remove them."

WCC has claimed there has been a rise in complaints about busking.

But when asked to provide evidence of this, the council declined to do so.

Campaigners say existing legislation already restricts noisy public activities to the hours of 10am to 9pm and allows authorities to remove truculent and defiant perfomers.

WCC did not answer questions about why it believes existing legislation is insufficient.

Save London Buskers also claims that the introduction of licences in the London Borough of Camden failed to reduce noise complaints.

They claim Freedom of Information (FOI) requests had in fact shown an increase in complaints - from 112 in the first year of licensing to 183 the following year.

They also claim the information shows a decrease in the number of licences from 234 to 163, indicating the changes either put buskers off applying or that buskers continuing performing without licences.

However, the campaign was unable to supply first-hand copies of this information and Camden Council said it was unable to locate the relevant FOI requests.