Recognising that it “must do more” to encourage diversity in the arts, Arts Council England has announced four new diversity programmes and published workforce data for its largest NPOs. 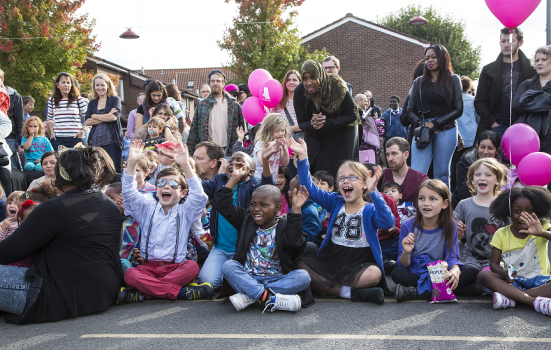 Children outside the Albany

Four programmes worth £8.5m have been unveiled by Arts Council England (ACE) to support “leadership, new work, and strengthening diverse-led organisations” as part of a renewed commitment to boosting its response to the creative case for diversity. It has also for the first time published workplace diversity data for National Portfolio Organisations (NPOs) and Major Partner Museums (MPMs) with over 50 permanent staff, revealing the percentage breakdowns of ethnicity in the organisations.

The announcement of the four programmes follows recognition by ACE that from 2012-2015 there was a fall in both the number of Black and minority ethnic-led (BME) and disability-led NPOs, and the proportion of BME and deaf and disabled board members. The first fund, the £2.1m ‘Elevate’, is intended as a direct intervention that aims to develop the “strength, management and governance of diverse-led orgs outside the ACE National Portfolio”. £1.8m will be available to support the development of new work by deaf and disabled artists in the ‘Unlimited’ programme; the ‘Sustained Theatre’ fund, worth £2m, will support BME theatre makers across the wider theatre sector; and a £2.6m fund called ‘Change Makers’ will address the lack of diversity in arts leadership.

Diversity monitoring mechanisms are also to be updated and ACE has started gathering diversity data on temporary staff. From 2016, funded organisations will be rated on their actual delivery of diversity, and assessed on the basis of having ‘met’ specific criteria, or having a ‘good’ track record. All NPOs will be expected to have ‘met’ their obligations – and aim to be ‘good’ – and organisations that fail to achieve either classification will be asked to resubmit plans to address their scores.

Charlotte Desorgher, of Company of Dreams, told AP that the Arts Council’s current ethnic monitoring leaves much to be desired: “I’ve just put in a Grants for the Arts submission for a dance production aimed at addressing negative stereotypes of the Middle East and was honestly shocked that there was no ethnic monitoring or public engagement option at all for Middle Eastern, North African, or even the Turkish/Kurdish communities, despite there being longstanding and sizeable populations of each here in the UK.”

By April 2016, all NPOs and MPMs will also be required to sign up to the Audience Finder system for collecting and comparing audience data, and this will be used to “improve our collective understanding of the make-up of cultural audiences across England”. MPMs and the 25 largest NPOs are already required to submit all their data on age, gender, race and disability status of an audience sample.

Workforce data in the report for all NPOs shows that 13.7% of staff are from a BME background, slightly up from 12.8% in 2012. There was a similarly small increase for people with disabilities, from 1.9% to 2%. The BME workforce in Major Partner Museums (MPMs) remained constant at 3%, but the number of disabled people increased from 2.6% to 3.8%. There was a change in success rates for grants for the arts, from 39.2% to 52.3% for BME applications, and 47.6% to 50.6% for disabled applications.

The Albany, located in the London borough of Lewisham where 46% of residents are from a BME background, is reported in the workforce data as having a 39% BME staff population. Chief Executive Gavin Barlow said that “there’s clearly more to be done over the coming years, both by ACE and funded organisations” and agreed that publishing the workforce diversity figures is necessary. He told AP: “It can only be a good thing for publicly funded organisations to be as transparent as possible about all aspects of their work.”

Hull Truck Theatre – based in an area with only 6% non-white population – responded to revelations that, in 2013/14, none of its permanent staff were from a BME background, but an above-average 6% were disabled: “We are committed to creating a culturally diverse organisation and this is reflected in our recruitment methods, including our new apprenticeship opportunities, participation programme and work presented on our stages. Our workforce is reflective of the social and cultural demographic of Hull and we aim to employ local people where possible.

“We have a strategic approach to diversity across the organisation and are working with partners such as Graeae Theatre Company and Sustained Theatre Artists Yorkshire to develop and showcase diverse artists,” said Executive Director Janthi Mills-Ward.