Creative processes at the heart

The place in which a cultural organisation finds itself can determine how it thrives, survives or even dies, but many organisations are now taking the lead in helping places reinvent themselves. Anne Torreggiani explores the rise of place-shaping. 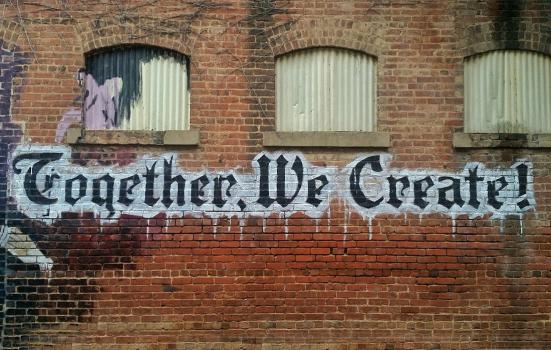 Our mantra for audience development has long been that it’s not just what you do, but where you do it. Because Audience Finder data gives us such a comprehensive view of audiences for subsidised arts and culture across the country, it tells us more starkly than ever before that where you live is either the biggest barrier or a leg-up to enjoying the benefits of state investment in culture.

We have looked in vain for what some have described as the ‘Twickenham effect’ – that people will generally travel far further for large-scale events. With the exception of a few festival events, which generally draw significant pilgrim audiences of super-informed 'metroculturals', catchments remain defiantly fixed, with the vast majority of audiences not willing to travel more than 45 minutes from home.

There are significant variations from this tendency. The less culturally informed and engaged you are, the shorter the distance you will be willing to travel, which is why programmes like Coasters, Creative People & Places and Cinegi all form an important lifeline.

We find invisible but apparently indelible ‘catchments of the imagination’. Although the travel time from Sheffield to Leeds or Manchester is about the same, audiences are less than half as likely to cross the psychological barrier of the Pennines. There are many such variances and clear patterns are starting to emerge for planning and investment at both a local and policy level, though we need to develop the habit of looking for them as part of our everyday practice.

It’s not just about distance: different places demand different kinds of experiences. We don’t need Audience Finder to tell us that preferences for arts and heritage vary between communities. Nevertheless, in combination with Audience Spectrum, Audience Finder has made it significantly easier to quantify and map those differences. Yet some cultural organisations continue to programme in a ‘community-blind’ way, without particular reference to the people in the places where they operate.

This is less of a problem where their community is uniformly privileged (and looks, thinks and chooses like arts-insiders), but a great challenge in places with less engaged or socially diverse communities.

The good news is that all this seems to be changing. Through our work we see more cultural organisations investing in understanding who their audiences really are and what makes them tick. They aren’t just relying on their existing audience feedback loop, but combining quantitative and qualitative insights to develop a creative and dynamic dialogue with their wider communities. Ever more popular models include working in local partnerships, involving local artists and volunteers, and developing long-term participation or community decision-making programmes.

This approach can and does have a profound effect on the scope and value of public engagement. A few years ago, we did some data analysis to find out which audiences of producing performance venues were the most representative of their place. Interestingly, the top three (Birmingham’s The Drum, Liverpool Everyman and Playhouse and Watford Palace Theatre) all had long-standing, far-reaching community involvement strategies woven into the way they worked.

Increasingly, this kind of approach is about far more than boosting footfall. It is designed to fulfil an organisation’s core social purpose. It would be nonsense to say that placemaking is a new function for cultural institutions – think Epidavros in ancient Greece, the Coliseum in Rome or any industrial-age statement museum.

But we are perhaps witnessing a move towards a less grandstanding idea of culture’s role in placemaking – neither Victorian civic-branding nor the developer-led gentrification of a culture quarter. Instead, many cultural organisations and initiatives are taking a lead in a more generous form of placemaking, creatively informed and driven by a pluralistic civic purpose.

Recently, place-shaping projects have dominated our work, from feasibility studies to place-based collaborations and the formative evaluation of projects in Creative People and Places, the cultural tourism programme Cultural Destinations, competitive place-based initiatives such as the UK City of Culture, the Great Place Scheme and London Borough of Culture. These are all complex projects with multiple stakeholders, demanding agendas and ambitious lists of potential outcomes – from better transport and improved health to cohesive and effective communities.

Despite the tendency to over-inflate the potential benefits, many of these initiatives are making a real impact. At their best, and like many pioneering cultural organisations, they show that putting a creative process at the heart brings something unique to placemaking, especially where cultural practitioners are taking the lead.

Members of our extended team recently came together to compare notes on the best cultural place-shaping work we’ve been involved with. Our criteria were initiatives that had meaningfully involved local people in decision-making and made real change.

Our conclusion is that the creative processes that cultural practitioners are skilled and confident in using are what make all the difference. It is the creative process itself that helps to create an authentic sense of meaning and togetherness, and distinguishes the contribution of culture from what a leisure or shopping centre could deliver.

If you don’t think of yourself or your organisations as a place-shaper, it’s worth thinking again. You probably have something unique and valuable to offer your community. And they might have the power to shape you in return.

Anne Torreggiani is CEO of The Audience Agency.
www.theaudienceagency.org

A series of events looking at geographic engagement patterns is programmed for later this year. Please drop us a line if you’d be keen to attend.