Opening up decision-making about what art gets made and by whom doesn't lead to people 'playing it safe', but to programmes that engage more people, more deeply. Tamsin Curror examines the evidence. 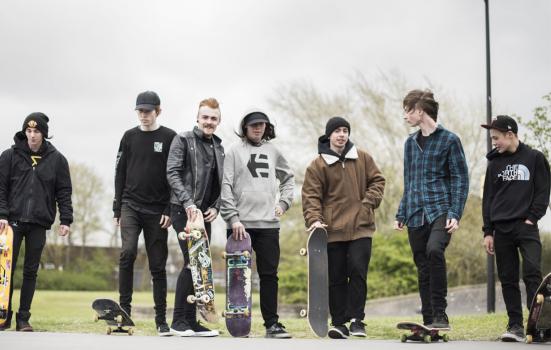 As part of Heart of Glass’s Bliss Park project Heather Peak of Studio Morison took more than 50 St Helens skaters on research trips to skate parks around the country.
Photo:

“Imagine a scenario where all of the creative choices in your own home, the colour and style of the decor, the music you play and the films you watch were all up to somebody else to decide. This would be pretty disempowering, yet in our neighbourhoods or collective homes this is exactly how it is…”

It’s hard to argue with this. It was part of a provocation made by Glenn Jenkins at our People Power Practice event in January. He’s from a grassroots project on the Marsh Farm Estate in Luton and worked with Creative People and Places (CPP) project Revoluton to create a piece of theatre about the 1995 riots on Marsh Farm.

Opening up decision-making about what art gets made – and how and where – leads to programmes that resonate and engage more people, more deeply. It means that people can be active collaborators in choosing and creating work that is of, with and by their community.

Community decision-making is at the core of our projects, with different iterations in different places. We don’t always get it right, but we learn from the practice of others, through trying out different approaches, reflecting and responding. Here are some of the things we are learning.

This is the starting point for Patrick Fox, director of Heart of Glass. You don’t need to speak ‘arts language’ fluently to bring knowledge and expertise to the table. Bringing people together as equals and creating a space where different opinions are valued is crucial. It means asking questions, listening, developing a shared language and leaving assumptions at the door. Heart of Glass does this across all its projects, including its current Bliss Park project to co-develop a new skate park, working with Studio Morison, over 50 skaters from St Helens, a skate board company, the police and the local authority.

Who are the informal networkers locally? Whose voices usually go unheard? Many of the our projects develop networks of local people to shape programming, commission artists and co-create work. These networks are often fluid, with people joining and leaving as fits in with their lives.

Creative Barking and Dagenham has built a network of over 180 cultural connectors, residents who programme DagFest and the GLOW Winter Lights Festival, commission artists, sit on panels to recruit team members and run their own creative projects. As one cultural connector commented, “the idea of commissioning without local input needs to die away”. Another asked at the No Boundaries conference in 2017: “Why doesn’t the arts sector work with real people more?”

Appetite in Stoke-on-Trent set up a Supper Club, a network of people from over 20 community groups, individuals who volunteer and audience members who meet monthly over food. Together they programme the city-wide The Big Feast festival, as well as updating each other on activities in their local areas. The group goes on regular visits to other festivals to share their reflections on what would work in Stoke.

Go and see visits like this are a feature of many projects. Trying out different things helps demystify the arts and generate ideas and inspiration for programming. And it doesn’t mean that people play it safe.

Again and again, groups commission and programme ambitious and challenging work. A trip with local residents to the Edinburgh Fringe to see shows by BAME artists resulted in one project programming a play by an Iraqi-British artist, telling the story of his family’s migration to the UK and his coming out.

In Hounslow, the programme is shaped by four local advisory groups that are now at a stage where they self-recruit and devise and lead their own projects.

The Heston and Cranford group created a poetry and photography project to help people talk about the anxiety, isolation and depression that was part of daily life on one estate. One member said: “I see this as the beginning. The need for it. And people coming – making a commitment – it shows the need.” A workshop participant added: “Nice to see there is so much creativity locally. And to have this space to develop the ideas that you’re all talking about. To be part of the conversation. That’s really nice, a sense of community.”

What links these examples is that many people in these networks had never considered the arts as relevant to them but have discovered new experiences and opportunities. They talk of growing in confidence and are hungry for more.

“You need to build good relationships with people on a permanent basis, not just be pulling people in…. because if they think you’re just someone that comes in and then goes… you’re a one trick pony,” said a resident of Mereside Estate in Blackpool.

We’ve learnt that you can’t underestimate the time needed to really listen, facilitate and build mutual trust and respect. Being transparent and open about the process and budgets is also key. There’s got to be a genuine, long-term approach, and this raises questions about responsibility to the communities we work with and how to sustain this work over long periods within shorter-term funding contexts.

Draw on a range of perspectives

Creative Scene commissioned a new family show for community venues in collaboration with the community. Project Director, Nancy Barrett, says: “A lot of touring work didn’t ‘speak’ to diverse urban communities and we needed to create something that would resonate with the intended audience.”

154 Collective worked with South-Asian elders to explore the oral histories and tales from their childhood that they wanted to be preserved and shared with the younger generation. Over 100 families attended workshops to co-author the story of Ho Jamalo – a folk tale from northern Pakistan – which became a central tale in ‘Rabbit Girl and the Search for Wonder’, and they were involved in rehearsals to make sure it retained the essence of the story they love. The strategy worked. 28% of the audience came from South-Asian backgrounds and feedback reflected the impact of engagement in the commissioning process.

“We don’t really go to watch any shows… but that was fantastic… it’s probably one of the best afternoons we have had as a family. Their eyes lit up in a way I hadn’t seen before… Often arts and culture don’t represent anything from our own subculture or our religion… it was really nice to hear a South-Asian story within that, to have something to relate to.”

In a time of division and increasing inequality, it is more important than ever that listening to people, valuing their expertise and commissioning and creating meaningful art with, for and by them starts to become part of the mainstream.

Which brings us back to Glenn, who links these approaches directly to a sense of democratic deficit. He’s convinced that “people need to be ‘own-powered’ to make these choices collectively… By using arts, culture and creativity to ‘spice up’ the democratic process we want to make participation in civic duties a joy, not a chore, providing the spark needed for democratic renewal and the democratisation of creativity in our communities.”

Explore this topic in more detail in two resources: Shared Decision-Making Toolkit by MB Associates for practical tips and examples on collaborative commissioning; and in Chrissie Tiller’s think-piece Power Up, a deep dive into the big questions that underpin this practice.

This article, written and contributed by Creative People and Places, is part of a series exploring ways in which we can all embed inclusive engagement practices in our work.

Unlocking the potential of peer learning
Working with real people