The gallery plans to raise its public profile and combat falling visitor numbers by changing the way its collection is displayed and opening a new Learning Centre for visitors of all ages. 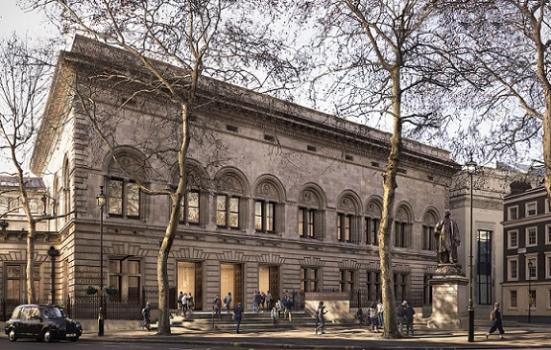 The National Portrait Gallery (NPG) has been given the green light for the biggest-ever redevelopment in its 123-year history. The £35.5m project will “significantly refurbish the building” and create a “more welcoming visitor entrance”.

Westminster City Council’s Planning Committee has granted planning permission for ‘Inspiring People’, a multi-million-pound undertaking that will create a new public forecourt on the building’s North Façade and enhance the gallery’s visibility and accessibility.

NPG’s expansion plans follow a slew of big budget redevelopments at high profile London arts destinations, including a £35m revamp at the Southbank Centre; a £50m renovation of the Royal Opera House; a £55m courtyard refurbishment and subterranean expansion at the V&A; a £56m upgrade at the Royal Academy; and a new £260m wing, the Switch House, at Tate Modern. All of these have opened to the public since 2016.

The announcement follows a difficult period for NPG, marked by falling visits and staff restructures to “streamline core costs”.
Visits were down by 10% in 2017/18 compared to the previous year. That same year, 24 members of staff, equal to 7% of the workforce, left the organisation as part of plans to ensure the gallery was “as efficient as possible”.

NPG was also in dispute in 2017 with next door neighbour the National Gallery over its proposed creation of new offices and a café, which NPG said would have harmed the view from its restaurant.

The planned expansion – produced by Jamie Fobert Architects, in partnership with heritage specialists Purcell – will bring with it a re-think of how its collection is currently displayed, allowing NPG to present “missing or hidden stories from significant moments in British history” across 40 refurbished galleries.

“The renewed National Portrait Gallery will allow us to be more welcoming and engaging to all and enable us to display our Collection in ways that bring to life British history and culture,” commented Dr Nicholas Cullinan, Director of the NPG.

There will be new retail and catering facilities, and the Gallery’s East Wing will be returned to public use as the ‘Weston Wing’. There are also plans for a new Learning Centre for visitors of all ages, with NPG launching a programme of nationwide activities to engage schools locally, regionally and on-site.

NPG has already secured £31.5m of its £35.5m fundraising target, including a £6.5m grant from the Garfield West Foundation towards the creation of a new public wing, and over £10m in grants from the National Lottery.

The gallery aims to secure all of its funds by this autumn, and to being capital works by summer 2020.

Research into gender pay gaps and the representation of Britain's female artists show some measures of equality are moving backwards,...

A new, tougher system of local restrictions will allow theatres and other venues to reopen in theory. But the sector remains on a knife...

Monday, 23 November 2020
Plans for the former home of French poets Arthur Rimbaud and Paul Verlaine to be turned into an arts and education centre have ground to a halt after Michael Corby, the benefactor who promised to... read more
(The Observer)